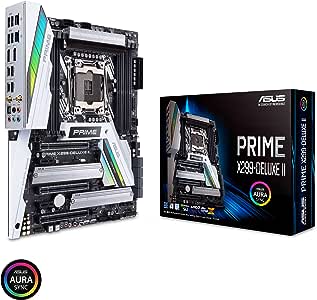 ASUS Prime motherboards provide the solid foundation needed for your initial build, plus flexibility to grow with your ambitions. With essential ASUS design and engineering, you benefit from as automated system tuning, comprehensive cooling controls, and immersive onboard audio.

Brett Maiwald
5.0 out of 5 stars Quality Number 2
Reviewed in the United States on February 2, 2019
Verified Purchase
This is the third of their X299 boards, really does the job. 8 SATA connectors, I have a 5x4tb drive Raid 5 plus a 3x1tb SSD Raid 0. Has 3 M.2 NVME's built on the motherboard, I have a 1tb in each, the one standing up in the picture has a mount I haven't installed yet. It comes with the cables and screws, however there are so many different things to do with this motherboard you have a tough time sorting and finding what you need for the particular build. I used the Corsair Obsidian case which did the same things, gave me 5x what I needed in cabled and parts. It does come with a daughterboard which I took a picture of, allows you to have 3 temperature probes plus the one temperature probe on the motherboard for a total of 4. Incidentally the case came with 4 also and it's own board. The daughter board powers fans, the mother board has plenty, plus for the CPU it has 2x CPU Fan connectors, and 2x Pump pump connectors, then on the bottom of the board is a higher power pump connector. There's a lot, you can do a lot with this board. The thunderbolt 3 I didn't get work as I wanted, reviews say you can plug in your displayport FROM your video card into the Displayport IN in the back, then using the thunderbolt 3 connection split that video into multiple outputs, I couldn't get it to work however could do a single video out. You have two Displayport IN, those are not outputs. Plenty of USB 3.1, plenty of everything. It uses the Intel Rapid Storage Technology, , RST or IRST, confusingly it looks like you have to pay for it but it's not, it's free you just turn it on in the bios then boot and it's there. You can see how I configured the drives in the picture, super easy and it's super fast. You can use one of your M.2 for an optane drive and use that to speed it up, but I would rather have 3x 1tb NVME drives and just use them for cache storage I set up. It supports the Aura but you can't see it because the case fans cover up the lights in the back and the ones in the middle of the motherboard are covered by the graphics card, that has to be there. The qcode and the screen, and the 4 lights that tell you status, plus the on motherboard bios flashing without boot, plus power and reset buttons, all huge plusses when doing the buildout.
Read more

R. Johnson
3.0 out of 5 stars Who ever did the m2 layout should be fired
Reviewed in the United States on December 7, 2019
Verified Purchase
So whoever set up the m2 layout of this motherboard must have never built or even thought very hard about building a computer before. There are two lovely horizontal m2 mount location with nice heat shields and everything. There is also one vertical m2 mount at the edge of the board with hinky looking optional m2 bracket you can attach. This is fine 3 m2 slots are better than 2. However, if you want to raid your m2 drives you have to put one in the nice horizontal mount, and one in the hinky ass vertical mount leaving a perfectly good horizontal mount empty. That is some budget tier BS. It's certainly not the end of the world and if this was some $200ish board I would not care but at around $500 I expect better.
Read more

Graham Held
5.0 out of 5 stars Perfectly working and featured motherboard
Reviewed in the United States on August 11, 2019
Verified Purchase
Those two 1-stars on here do not provide any useful criticism and should be ignored.

Asus motherboards (and BIOS) are top quality - My previous computer built in 2014 with an Asus mobo still works perfectly well. This one is no exception, and although pricey, the features are worth the money (in my case). Unfortunately the LGA2066 socket comes with a price premium on components that support the LGA2066 features.

Mine arrived in perfect condition and installation went on without any troubles. I haven't had any issues with it since I installed it and I don't expect I will. RAM (3200 mhz) overclocked without any issues either.

Just a word of warning for those of you several running peripherals, like a control board and a cpu cooler, that require more than one USB2.0 header: there is only 1 USB2.0 header at the bottom of the board. Be prepared to order a header splitter; the one from NZXT works well.

Amazon Customer
1.0 out of 5 stars Wish I read the reviews. 2 dead boards in a row
Reviewed in the United States on October 19, 2019
Verified Purchase
Started with known working pc. Wanted to upgrade for the dual thunderbolt DP in onboard.

-First board code: 00, seems a lot of people had this happen so I got a second board.
-Second board didnt even cycle.

You plug it in, all the fancy lights turn on and the oled fires up and you press the power button (because you have nothing else hooked up in testing mode) and nada. Not even an error.

All components back in original computers with gigabyte board and writing this review.... So yeah... Confirmed asus bad QA these days. Believe the hype.

Amazon at least is being cool about it. First return is on the house, second one was 6 bucks with the pre-lable. Price of doing business. Thanks for not making me deal directly with asus.
Read more

Thomas
4.0 out of 5 stars One of a kind
Reviewed in the United States on March 3, 2019
Verified Purchase
Arrived with bent pins in one of the USB 3.0 headers. I didn’t realize this until after I put it together, and other than that, it seems to work. My case only has one 3.0 connector and the motherboard has two total, so fortunately it ended up “not mattering” for this build (it still matters, especially at this price point). As I understand it, this is the third motherboard in the x299 Prime series Asus put out, and the other two have mixed reviews indicating Amazon, Newegg, and potentially others had received some bad batches. I took the gamble because frankly Asus knows exactly who they’re making boards for, and there’s nothing else like this on the market. Once the drivers are installed, the Thunderbolt 3 ports work flawlessly with the Presonus Quantum + the Apple TB2/3 adapter. Overall, this is a premium motherboard that offers a lot. I’m hoping it will hold up over time.
Read more

Patrick T.
4.0 out of 5 stars Quality Item
Reviewed in Canada on April 14, 2020
Verified Purchase
Paired with an Intel I9 10900 only reason I didn’t give it 5 stars is trying to install Windows 10 newest OS was impossible had to go back to Version 18.xx then spend hours updating
Read more
Report abuse

Li Zi Ming
5.0 out of 5 stars Good quality
Reviewed in Canada on July 1, 2020
Verified Purchase
Worth the money
Read more

Page 1 of 1 Start overPage 1 of 1
This shopping feature will continue to load items when the Enter key is pressed. In order to navigate out of this carousel please use your heading shortcut key to navigate to the next or previous heading.
Back
Next
Pages with related products. See and discover other items: best motherboard, wifi gigabit, ASUS RGB Motherboards, dual lan, ASUS Aura Motherboards, Series Motherboards