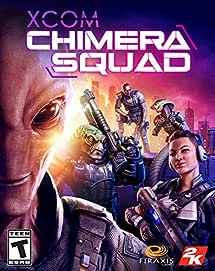 Visit the 2K Store
Platform : Windows 10 |
Rated: Teen
| DRM: Steam
3.9 out of 5 stars 7 ratings
Available now.
Ships from and sold by Amazon.com Services LLC.
Note: After purchase, you can access the item in Your Games Library.
By placing your order, you agree to our Terms of Use.
This product is non-returnable and non-refundable.
Note: Currently, this item is available only to customers located in the United States.

XCOM: Chimera Squad delivers an all-new story and turn-based tactical combat experience in the XCOM universe.After years of alien rule, humanity won the war for Earth. But when the Overlords fled the planet, they left their former soldiers behind. Now, five years after the events of XCOM 2, humans and aliens are working together to forge a civilization of cooperation and coexistence.Welcome to City 31, a model of peace in a post-invasion world. However, not all of Earth's inhabitants support interspecies alliance. Chimera Squad, an elite force of human and alien agents, must work together to destroy the underground threats driving the city toward chaos.Your agents are unique: each of them equipped with special tactical abilities and driven by a different motivation for joining Chimera Squad. Deploy targeted team members to investigate and combat the dangers that pervade the districts of City 31. Lead Chimera Squad through a new experience that innovates on XCOM's turn-based legacy, utilizing strategy, teamwork, and new breach-and-clear gameplay to complete your mission objectives.The future of City 31 depends on you.

3.9 out of 5 stars
3.9 out of 5
7 global ratings
How are ratings calculated?
To calculate the overall star rating and percentage breakdown by star, we don’t use a simple average. Instead, our system considers things like how recent a review is and if the reviewer bought the item on Amazon. It also analyzes reviews to verify trustworthiness.
Top reviews

Paul Centeno
2.0 out of 5 stars XCOM: Mass Effect Squad
Reviewed in the United States on April 27, 2020
My review will explain things in the following order: Cons, Bugs, Suggestions, and Pros. I am a huge fan of XCOM beginning with the original games 25 years ago and wanted to be as unbiased as possible.

When the first XCOM reboot was announced, it was frustrating enough to learn that we could only control a max of 6 soldiers. XCOM 2 did not change this for the better. But now Chimera squad made it worse, reducing playable soldiers to 4 with no upgrade available. Oh but guess what, if you sacrifice one of your 4 soldiers you can bring in a robot...lame.

No special bond with your soldiers. Since the original XCOM 25 years ago, one of the most entertaining things about the game was naming our soldiers. Guess what, that has been removed. You cannot edit them, give them their own history or names. The developers should have kept their characters for the story while also allowing us to create our own soldiers. This same concept was applied in Pillars of Eternity and it worked out perfect.

Promotions have severely regressed. 90% of any promotion forces an ability on a soldier rather than you choosing. Customize has almost been completely removed. And there are only a few promotions.

In the beginning of the game, you hear a news reporter...it's a sectoid. Seriously? An alien reporter working for the news? It's sad that this happened in real life, but do you know how long it took for women to work and then black people too? Mind you, they are human. This game should have taken place at least 15 years after XCOM 2. Then it would make a little more sense for aliens to be working. After 5 years, most people would still want to obliterate the aliens that caused so much destruction to our world since 2015.

Aliens in the game sound American and mastered English better than human immigrants.

Your new territory, known as City 31, looks like an ordinary city from 2015 during XCOM 1. Yet in 2035 during XCOM 2 every city area looked incredibly advanced and sophisticated. Now it is the year 2040 but we regressed 25 years? This does not make any sense at all.

City 31 is a brand new city, right? Then why is there a mission in City 31 where it looks like an out of control 20 year old jungle growing through cracked cement, buildings, and cars? It looks cool but makes zero sense.

In addition, your vehicle for missions is often found blocked by other cars that look as if they have been rotting for 30 years. How did your vehicle get in that spot without damaging anything to park there and how will it leave when you are escaping during evacuation missions? That made no sense.

Fans of the original series may attempt to compare City 31 to the likes of Mega-Primus from Apocalypse. Not even close. City 31 is merely a tiny diagram and image on your map. Meanwhile, you can completely explore the entire city of Mega-Primus from Apocalypse and even raid any building you wanted. To be quite honest, even though I think Apocalypse was a masterpiece, I do admit that I found it silly that the inter-dimensional aliens only appeared in one tiny city. Realistically, an entire story taking place in one city is weak. XCOM is supposed to defend Earth. Not just one city.

City 31 is not Gotham City. Why try to turn it into that? Why does it so happen that so many villains are all in one city at the same time? Maybe it worked for DC comics with Gotham City and Arkum Asylum, but we're dealing with a story that has a global effect that suddenly retreats into one city. That was the one and only weakness from Apocalypse. The developers need to learn from past games, listen to fans, and build on the story to make it better.

For example, if they truly aim to reboot Apocalypse, yes I would love to see a new Mega-Primus come to life, but it should just be one location. Any future XCOM game should maintain a global event in which aliens are trying to either destroy, take over, or dominate the world.

Going into the story itself (minor spoiler alert), there is a faction called Progeny that you need to investigate. You learn from the beginning that this group has no love for aliens/mutants/hybrids and are a human only group, but during missions you fight thralls/mutants. Then a few missions down the road there are full-blown aliens with them with no explanation. Major hole in the story.

During the ending (spoiler alert) it shows squad members you never even hired. I refused to hire the snakeman because the idea of a snake on my team is just too dumb, but they still showed him in the finale. And the two people talking in the dark monitor room converse in such a quick and vague way that it is rather pointless. We all know XCOM will continue to battle a war. It was just a stupid and lazy ending for a mediocre and overall disappointing game.

I kicked down a door but it was still sealed yet my team was able to walk through it as if they were ghosts.

During a mission where I was flawless, after killing the last enemy when you need to extract the squad, Verge panicked. So in bad situations he is okay but in an awesome victory he panics?

Terminal says "open sesame" for a breach climbing on the roof. Open what?

Why would a soldier's weapon magically become disabled just by walking through a door during breach? There is no logic behind it.

There is a mistype on Sustain...if Terminal takes enough damage to begin Bleeding Out, "she is" instead reduced to 1 HP. I doubt any developers will see this and fix it.

New concept that should be implemented: Heroes. The story-driven characters can be heroes, slightly stronger than normal soldiers and with at least one extra rare ability. Grant players the ability to hire and edit new soldiers. We should have the option to take heroes or our own custom soldiers.

Breach is an interesting concept added to this game, but after awhile it got a little silly with 3 breaches in one mission. It works sometimes for the final mission, but regular missions don't need breach every single time you enter another room. After the first initial attack, all enemies should realistically be alerted to our presence.

An alien is named Floyd. Seriously? No alien should have an American name, not for at least the next 100 years.

Give aliens voices that make them sound like aliens. Even mutants/hybrids should sound a little more coarse.

Compare the map of City 31 to the city of Mega-Primus. Sometimes roads were clear and other times cars or trucks would appear for delivering supplies. Then you would see vehicles owned by gangs or the cult. It was so realistic back in 1997. City 31 is just a tiny set image that looks the same. The city should have looked more futuristic, realistic and alive.

Despite the limitations mentioned above in the cons section, the combat is still very entertaining.

The combat music, like the other XCOM games, continues to keep you pumped and engaged.

The witty banter at the XCOM base is amusing. In fact, with the exception of the accents from aliens, most dialogues in the game are solid.

atma
2.0 out of 5 stars Baffling
Reviewed in the United States on October 13, 2020
It's baffling to me how this got made. I feel like they were trying to port Xcom to mobile but gave up half way and pushed it to PC instead and called it a day. I can't imagine this made any money and I feel like it did more to hurt the Xcom brand than move it forward. This is basically trash and not Xcom at all.
Read more
Helpful
Comment Report abuse
See all reviews