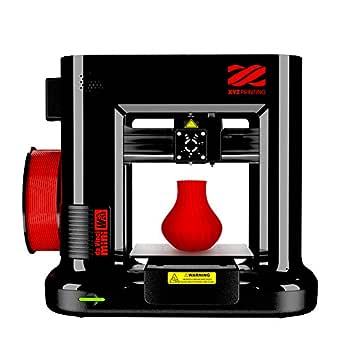 Specification for this product family

What Else We Offer

Start your 3D printing adventure By downloading some of the 4, 500+ Free 3D models available from our online XYZ 3D gallery. We have nine categories that include everything from toys and games, to art pieces and educational items. Students and teachers get free access to our online Curriculum Education Program, steam, which helps K-12 science, technology, engineering, arts, and mathematics educators to incorporate 3D printing into their classroom.

3.7 out of 5 stars
3.7 out of 5
797 global ratings
How are ratings calculated?
To calculate the overall star rating and percentage breakdown by star, we don’t use a simple average. Instead, our system considers things like how recent a review is and if the reviewer bought the item on Amazon. It also analyzes reviews to verify trustworthiness.

Joseph W. West
2.0 out of 5 stars Caution Before You Buy
Reviewed in the United States on January 9, 2017
Color: Orange/BlackVerified Purchase
Caution before you buy. When I was researching 3d printers for my daughter for Christmas, the XYZprinting da Vinci mini looked like the perfect entry-level printer. It's still workable, but I have some buyers remorse. First and foremost, what you will not uncover easily is this printer contains Data Rights Management (DRM) protection on its filament. This is what that means:

When you purchase this printer it comes with a spool of starter filament. That spool has a chip in it and that chip counts how much filament is left on the spool. Seems harmless, but once that chip registers empty, it cannot be reset. If you use filament from another company, such as Hatchbox, the printer usage counts against that chip. Once it reaches zero, it doesn't matter how much filament you have, you no longer can print until you order another spool from XYZprinting. It's similar to the shave razor business model; sell the razor cheap but charge enormous prices for the razor blades.

That means you cannot buy third-party filament for roughly $20.00 a spool, you must instead purchase new filament directly from XYZprinting and pay their prices. So ignore all those 'also purchased with this product' advertisements. I now have three nearly full spools of filament that cannot be used because my chip says I need to buy more. Infuriating.

There are some other issues I have with the printer. The instruction manual is poor, it's a stapled together printout with poor quality images. The detail on the print quality is average to low. The software must be downloaded and does not come with the machine, and once installed is not very user friendly. I've only successfully printed 3-4 projects out of about a dozen due to a variety of failures. The most common issue and an important item to note if you purchase this printer, you'll need to use a glue stick to coat the stage. If you do not do this, your project will move part way through your print and that ruins the entire project because of how precise the print needs to be.

On the flip side, I'm learning a lot about 3d printing. I'll probably get something more professional at a later date because this machine isn't very good for serious printing. I may try to sell it and upgrade.
Read more
1,947 people found this helpful
Helpful
Comment Report abuse

H. E. Dormer
4.0 out of 5 stars Great Machine, OK Software, Improvements Constantly
Reviewed in the United States on November 25, 2016
Color: Orange/Black
Let me preface this review by saying this is my 3rd 3D printer, the other two are a FlashForge Creator (wood framed model) and a BigBox Pro. I work professionally as a designer and prototype maker, so these machines are worth their weight in gold if they work well, reliably, and without too many hoops to jump through.

The XYZ Da Vinci Mini w seemed like a good machine to have on hand for small parts in PLA, which get printed often here and take up machine time on bigger printers that could be doing other materials. The 5.9”² build area is accommodating, the machine has probably the nicest fit & finish of any of my other printers (heck, my FlashForge Creator is unfinished wood!)

What I like the most about this machine is that out of the box, right away, you have everything you need to be printing stuff, minus a computer. While this doesn’t let you turn it on, scroll through a menu on an LCD, and hit “print,” this does work the same way your 2D printer does. There’s very nearly no assembly (everything “clicks” together) and then you plug it in, turn it on, and use XYZWare to start a print from your computer, same as you would with printing a piece of paper. This does mean that a computer has to be set aside to run the printer, but it seems to be able to run in the background just fine.

Overall the machine has been super reliable and has gotten easier and easier to work with thanks to the software that it can print with, XYZWare (it also is supported by Windows Builder, though I have not tried this yet). It has given me less of a mechanical headache than my other machines, and now at a likely 130+ hours of printing it has had no clogs or major errors while running. Nice enough, they include unclogging pins with the accessories pack should you run into that as an issue.

Things that are working very well or are huge benefits to the machine:

• Motion electronics (how it moves the print bed & head, feeds filament, etc) are absolutely top notch, well engineered, and easy to use. In the end, this is THE most important thing about any CNC robot/machine, because software comes and goes and can be updated. The XYZ Printing team did a really wonderful job on the Prusa i3-style robot hidden underneath the child safe exterior.
• Accessories and extras are awesome, and well considered (esp. unclogging bits, print removal spatula, plastic “enclosure”)
• Did I say it’s nice looking? Way more professional than some other consumer level machines. It’s also really small when compared to my other machines, and the footprint of the machine is the same as a 15” MacBook Pro.... Small. Could theoretically put the machine in a medium sized backpack or small rollerbag.
• LED button does a good job serving as a status display, as there are a number of colors and modes of blinking to show printer function.
• The free STEAM resources are actually really excellent.

Things that I’m neutral on:

• It’s not headless aka no LCD screen. This means it’s cheaper, but also means you need a computer set aside to run it. It IS wireless, so that’s a plus, but I do miss printing from an SD card and not using a computer. This is not a negative, because the savings is noticeable and the wireless works well.
• The printer will only work with XYZ Printing PLA filament rolls. This is because each roll comes with a digital ID card that lets the printer know it’s authentic, and serves as a milage timer for the roll. This gets a “neutral” because there is an upside - every roll is 100% guaranteed by XYZ not only to work well and to be of high quality (it sure seems to be), but also to be heavy metal and DEHP-free, non-toxic, and biodegradable. I do buy PLA from other manufacturers (for my other machines) but it rarely comes with such claims. As 3D printing DOES create particulates around the machine during printing, it’s good to focus on filament that is going to be safe in a home or school environment.

Things that I wish I could change, though XYZ is dealing with most of them:

• Initial versions of XYZWare were slow enough to complain about. The software gets faster and more user friendly every update, and updates are often.
• I do wish you could change print speed during printing, but have been talking to the XYZ service team to discuss this as a feature. This will probably get fixed.
• It’s not got a proper profile set up for Simplify3D yet, for people who would like to use a 3rd party slicer/controller. This will probably get fixed after full product release.

AND, lastly, some tips for people who pick this up:

• Brim your prints if you have a hard time with adhesion
• One quick spritz of Aquanet hairspray (the purple can, available at most Walmart/Rite-Aid/CVS/Pharmacy Stores) on the build “surface” (masking tape sheets) will last a LONG time and might even make the first print or two very, very difficult to remove.
• Don’t forget to reset the printer with the LED button after prints, otherwise you’ll wonder why you can’t print again :)

Attached are a photo of the printer with a 15" MacBook Pro, as well as it's BigBox brother next to it.
Read more

M0
1.0 out of 5 stars terrible printer
Reviewed in Canada on February 27, 2019
Color: Black/RedVerified Purchase
I mean the printer itself is fine, it works very well. but the thing is the quality of the filament came with the printer was terrible. it broke inside the machine and jam it. you can not use 3rd party filament, because they put chips in their filament roll, and they block it on their driver and software, so basically they force you to use their terrible filament. what a shame
Read more
3 people found this helpful
Report abuse

Page 1 of 1 Start overPage 1 of 1
This shopping feature will continue to load items when the Enter key is pressed. In order to navigate out of this carousel please use your heading shortcut key to navigate to the next or previous heading.
Back
Next
Pages with related products. See and discover other items: Small 3D Printers, 3d printers under 300 dollars, micro 3d printer, best 3d printers for beginners, 3d color printer, professional 3d printer