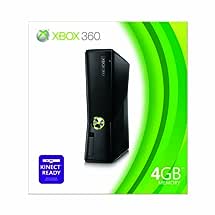 Product Description
The new Xbox 360 4GB Console. Here today, ready for tomorrow with a brand new, leaner machine. Wi-Fi is built-in for easier connection to the world of entertainment on Xbox LIVE, where HD movies and TV stream in an instant. It’s ready for the controller-free experiences of Kinect – you don’t just play the game, you are the game. Xbox 360 is more games, entertainment and fun.

What’s In The Box?

Built-in Wi-Fi: The new Xbox 360 is the only console with 802.11n Wi-Fi built-in for a faster and easier connection to Xbox LIVE. Stream HD movies and TV or download games from Xbox LIVE in 1080p and 5.1 surround sound from anywhere in the house. Compatible with b/g/n networks.

Xbox LIVE: Xbox LIVE brings a world of entertainment to you. Instantly watch movies and TV streaming from Netflix. In crystal-clear HD, or download game add-ons like new levels, characters, maps and songs. Easily jump right into online multiplayer fun and play along with friends around the world. Plus, get your favorite music from Last.fm, connect with friends on Facebook and post Tweets on Twitter. Xbox LIVE is your connection to more games, entertainment and fun.

Kinect Ready: Featuring a dedicated, specialized port, the Xbox 360 4GB is built to connect seamlessly with the Kinect Sensor. Kinect brings games and entertainment to life in extraordinary new ways – no controller required. Easy to use and instantly fun, Kinect gets everyone off the couch moving, laughing and cheering. See a ball? Kick it. Want to join a friend in the fun? Simply jump in. Even control an HD movie with a wave of your hand.

Xbox 360 Wireless Controller (black): This award-winning, high-performance wireless controller features a range of up to 30 feet and a battery life of up to 30 hours on two AA batteries.

More ports: Connect more accessories and storage solutions with added USB ports. Now with a total of 5, (3 back/2 front) you’ll find more places to plug and play. Plus, in addition to the standard Ethernet port and HDMI output, we’ve added an integrated optical audio out port for an easier connection to the booming sound of your A/V receiver.

4.2 out of 5 stars
4.2 out of 5
1,907 global ratings
How are ratings calculated?
To calculate the overall star rating and percentage breakdown by star, we don’t use a simple average. Instead, our system considers things like how recent a review is and if the reviewer bought the item on Amazon. It also analyzes reviews to verify trustworthiness.

The Boog
5.0 out of 5 stars Industreal DVD Player
Reviewed in the United States on April 29, 2019
Verified Purchase
Call me old. Call me a big sissy. Call me whatever you want, but I still watch DVD's. I'm sorry. I know you stream everything. I know you can't be held down with physical media. I know you are young and think you can quit your job and just travel the world with no responsibility. You don't need a bedroom. You don't need healthcare. The only thing you need is a plane ticket and a dream. Yeah, Yeah... But someday. Someday.. The air mattress on the floor will seem lower to the ground. Someday you will wake up in pain and wish you had a primary car provider and insurance. Someday you will need all the creature comforts and security of a home. What then? Where is that plane ticket going to take you? Where are those flip flops going to take you? Where is that half eaten burrito, and that trail mix in your beat up old knapsack going to get you? Nowhere. And I will be home, in my comfortable chair, enjoying a move because this x-box 360 has an indestructible DVD player that will outlast your memory after you have forgotten your Netflix password.
Read more
38 people found this helpful
Helpful
Comment Report abuse

Kmoor799
1.0 out of 5 stars DO NOT BUY THIS (LITERAL) PIECE OF TRASH
Reviewed in the United States on June 10, 2018
Verified Purchase
This is the worst product I have ever purchased. If I could give less than 1 Star I would. This Xbox literally should just be thrown away. The color was all yellow. There was a loud buzzing sound when plugged in. The controller was in pieces and I had to super glue it together. It was supposed to be 2 day shipping and took over a week. Then I had to return it the same day I got it but I wasn’t home so now I might not be able to?! Are you kidding me?!?!
Save yourself the headache and look elsewhere.

Joel Morillo
5.0 out of 5 stars Great gaming console!
Reviewed in the United States on January 23, 2017
Verified Purchase
Great console!!
I bought this for my son. I used to have the first generation of Xbox 360 (the white one) and i love it.
My son uses all the weekends and recently upgrade the internal storage.
Is a great console. Doesn't have the temperature issues as the previus versions, have integrated WIFI, have HDMI port for a better picture quality. Several USB ports to make it more versatile. Is just great!

Lacey
5.0 out of 5 stars Still Going Strong
Reviewed in the United States on June 1, 2015
Verified Purchase
Okay so I bought this from Cambria Bail Bonds for about $80 about 2 years ago and I must say I am so incredibly pleased. Let me give you the lowdown, won't you? The console came in beautiful condition (a few bumps and scratches but who cares?) with all of the wires and even a fully-functioning controller with only a few scratches. Of course, this system was used and my mother had warned me that it would probably be broken or break quickly and I am very pleased to say that I have yet to find an issue. My console connects to the internet perfectly and doesn't seem to have any problems. My friend bought a used 360 around the same time I did for $120 (from a different company) and hers broke less than a year after purchase. All I had to do to get this console working was buy a hard drive for memory purposes and an HDMI cable (this console came with an AV jack cable). In case anyone's confused, this is one of the newest models of the Xbox 360 so it has a built-in cooling system. Couldn't be happier with a used console!
Read more
8 people found this helpful
Helpful
Comment Report abuse

Debbie
3.0 out of 5 stars Somewhat disappointing since child had been waiting for it
Reviewed in the United States on July 14, 2020
Verified Purchase
The xbox and controller looked in great condition except the start button on the controller did not work appropriately. And the other problem was the family lock pass word was still on so it had to have a factory reset. I believe it should of been in adequate working condition. In all fairness there should be another controller sent since you cant exactly play without it and it was advertised with controller.
Read more
2 people found this helpful
Helpful
Comment Report abuse

This console is built exactly like the 250gb slim with the obvious exception of memory size. I won't go deep into the features because you can read that in the product description. Anyway, there's a very good chance 4GB will not be enough to play games. So you have 3 options: upgrading the memory via xbox 360 hard drives, purchasing USB flashdrives, or taking a chance hoping you'll never have to install a game or buy dlc. (downloadable content)

On the back of every xbox game, there is fine print on the bottom for memory usage. Take Halo 4 for example, you'll need to install parts of the game in order to play online. There isn't enough space on the 4GB hard drive, but you can install the information onto a USB flash drive and play online perfectly fine. There are many 16-32GB for around $10-$30 on Amazon.com that would be more cost efficient than springing for a larger hard drive.

Personally, I play many more games on my Playstation 3 than my xbox 360, so I don't see myself upgrading it's hard drive anytime soon. I did buy a 16GB hard drive so I can play Halo 4 online. All in all, if you understand what you're paying for, then the 4GB makes a powerful, affordable home console.

Nicole F
5.0 out of 5 stars Works perfect, fast shipping!
Reviewed in Canada on January 17, 2019
Verified Purchase
Product shipped very quickly which I appreciated and came with all included items (console, controller, cords, and 2 included games). Product has very minimal scratches, most of which are on the power bar so no one notices. Console works perfectly fine and I have had no issues setting it up or playing any games.
Read more

Amazon Customer
4.0 out of 5 stars Not Bad
Reviewed in Canada on July 11, 2017
Verified Purchase
Works great so far. This is my first time purchasing any Microsoft console or Xbox. And it took me awhile to set but it works as it's suppose to. However, I did not realize that it didn't come with a hard drive so I need to purchase one before I'm able to play anything. Controller looks and works great aswell
Read more
2 people found this helpful
Report abuse

Crystal
1.0 out of 5 stars Big waste of money, very dissatisfied
Reviewed in Canada on April 29, 2020
Verified Purchase
Cant do anything on it, it came with a memory stick because the memory was all used up on the system itself. Disappointed that I wasted this much money for my sons to have a system that they cant play on
Read more
Report abuse

Amazon Customer
1.0 out of 5 stars Not very usable.
Reviewed in Canada on August 25, 2020
Verified Purchase
Very slow, freezes allot, language wont change. If I shut it off and turn it back on it sets the language back to french no matter how much I change it. Wont stay connected to the wifi, keeps auto connecting to a different one, default one.
Read more
Report abuse
See all reviews