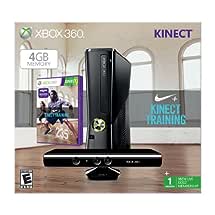 Xbox 360 gives you great games and entertainment, and now for a limited time get fit with an Xbox 360, Kinect Sensor and Nike + Kinect Training all in one package. With the largest portfolio of games, Xbox 360 has something for everyone - from classic titles to the biggest blockbusters. And built-in Wi-Fi makes it quick and easy to take your Xbox 360 online to play with friends wherever they are. You also get access to tons of great entertainment on Xbox LIVE, like HD movies, TV shows, live sports, and your favorite music. Entertainment is more amazing with Xbox.

3.7 out of 5 stars
3.7 out of 5
120 global ratings
How are ratings calculated?
To calculate the overall star rating and percentage breakdown by star, we don’t use a simple average. Instead, our system considers things like how recent a review is and if the reviewer bought the item on Amazon. It also analyzes reviews to verify trustworthiness.

mrskycar
3.0 out of 5 stars Gets me moving
Reviewed in the United States on December 3, 2013
Edition: 4GB with Kinect Nike+ BundleVerified Purchase
What I thought would be a five star product, I take off a few stars because of the Nike+ game's limitation and the condition of the product and product packaging from Amazon. I have had the system for a few days now and feel I can give my view.

The product arrived with a branding sleeve over the bundle box which was slightly torn and the console box itself had several security seals all around (leading one to believe it was opened and repackaged *several* times). The bundle box itself was a bit dirty, read differently it lacked the shine of a new box. Inside the box, some of the papers were bent and out of place. This is NOT what I expected when I ordered a new item. I did not feel like challenging the condition so I opened the box and enjoyed having an XBOX 360. For the price I paid, I was not happy and that is where one star goes.

Inside the box I had one controller, batteries, Kinect Adventures, Nike+, Kinect sensor, console and Kinect cables (no HDMI), the console, and various papers, flyers, and a free Live code. There is no headset, controller chatpad, or Kinect TV mount either which I knew I would order later. Setup of the console hardware was very simple and the first-run wizard was fairly self-explanatory. There are steps where you may want a computer and one where you would want others to step away while you slowly enter your profile password with the D-pad. Xbox SmartGlass is a nice companion smartphone app that can help here.

The Kinect will indeed need a decent amount of floor space at minimum. I have not placed the Kinect above my TV to see if it will make any difference but the sensor does move on its own. The setup of the Kinect is easy and once you have it working, the sensor does function well for its intended purpose. It is not a perfect device and it has its quirks but all things considered, its okay. From two feet above the ground and inches away from the TV and its speakers, the sensor does have problems picking up floor movements.

Once you have everything setup, the storage space limitation is very obvious from the start. You will need a slim USB drive to fix this. Additionally, what did bother me was the requirement of Gold membership to access Internet Explorer and other apps on the system. There are plenty of apps one can download to extend the XBOX into an informal TV. For an older console, the software didn't have anything particular that stood out once you understand where things are and what certain menu functions rely on.

Kinect Adventures is a very limited game, geared to young kids, to the point where I would call it "a fun game to demo the Kinect". You will get some exercise, but nothing more. I ended up getting Forza 4 to give purpose to the gaming side of XBOX which I thought Kinect Adventures might handle by mini-games.

Nike+ is a very solid workout at home game. It will definitely make you sweat and 'feel the burn'. There are a few limitations I would like to point out. The Kinect sensor/game programming has trouble reading floor exercises and a few times reps won't count and/or incorrect postures are dismissed and counted instead of corrected. The main problem with this game is it does not allow flexibility for those who may have trouble coordinating with the onscreen trainer and verbal hints the first several times. Instead, it just moves on after certain time has elapsed. Also, if the trainee is exhausted and unable to match with the game, the workout is not altered and the game is unable to respond to such a scenario. Again, skipping instead of adapting. I will stress that anyone who wants to workout at home with this game should be coordinated and relatively fit and common judgement should be higher than sticking to the workout. Honesty in the exercises will go a long way and using knee padding will help avoid pain in the long run. In other regards, the game does adjust to the player's abilities somewhat and keeps reasonably good track of the movements and progress overall.

I do feel I will get some form of result from this scheme. I took off another star here because Nike+ can't adapt to exhaustion, does not stop for less than sharp trainees to coordinate with trainer's tutorial pace, and does not contain anything less active or explosive for the older audience.

If I had to recommend this bundle, I would probably only do so if the price (under $200 for me) was right but I do feel this a good starting point to get active.

Daniel De' foe
1.0 out of 5 stars It is now May 2014 and it does not work...They say I am not under warranty 8 months after I purchased it.
Reviewed in the United States on May 8, 2014
Edition: 4GB with Kinect Nike+ BundleVerified Purchase
I have discovered the this XBOX slim requires a special drive, and has a different warranty then the 360. This is what you see if you look up microsoft
The warranties are:

Definitions
“Xbox 360 S” means a new Xbox 360 S console purchased from an authorized retailer.
“Accessory” means a new Microsoft branded Xbox 360 or Xbox 360 S hardware accessory purchased from an authorized retailer. A hard disk drive is an Accessory whether preinstalled or purchased separately.
"Warranty Period" for Xbox 360 S, means 1 year from the date You purchased it; and for Accessories, means 90 days from the date You purchased it.
“You” means the original end-user.
“Normal Use Conditions” means ordinary consumer use under normal home conditions according to the instruction manual for the Xbox 360 S or Accessory.
“State” means a State, the District of Columbia, and any other United States territory or possession. “The United States of America” includes all of them.
Warranty
During the Warranty Period, Microsoft warrants, only to You, that the Xbox 360 S or Accessory will not malfunction under Normal Use Conditions.
This is the only warranty Microsoft gives for Your Xbox 360 S or Accessory and Microsoft gives no other guarantee, warranty, or condition. No one else may give any guarantee, warranty, or condition on Microsoft’s behalf.
IF YOUR STATE’S OR PROVINCE’S LAW GIVES YOU ANY IMPLIED WARRANTY, INCLUDING AN IMPLIED WARRANTY OF MERCHANTABILITY OR FITNESS FOR A PARTICULAR PURPOSE, ITS DURATION IS LIMITED TO THE WARRANTY PERIOD. Some States or Provinces do not allow limitations on how long an implied warranty lasts, so this limitation may not apply to You.

I purchased this on September 28 2013 which is not a year from right now and they say my equipment is not covered anymore.
Read more
Helpful
Comment Report abuse

jgip
5.0 out of 5 stars Great for exercise and family entertainment
Reviewed in the United States on January 5, 2014
Edition: 4GB with Kinect Nike+ BundleVerified Purchase
I don't know why I waited so long to buy one of these. Was debating between one of these and the dying Wii-U, and so glad I chose the xbox360 w/ Kinect instead. Played a Wii at a friends house, and the controller was so limiting --and difficult for our almost 4yr old son. The kinect, however, has been great. We use this almost exclusively for kinect games and exercise games (Kinect Sports, Adventures, Dance Central, Nickelodeon Dance, etc). My wife, son and I can enjoy family time and be very active at the same time. We live where it's very hot and there are lots of mosquitoes, so having this to stay active indoors is great.

I'm the only one in the house using the Nike+ program, but I really like it. Tracking is great except for one exercise. I've been consistently using it for about 3 weeks, and I'm definitely already slimming down and getting more toned.

Much cheaper than the Xbox One and with way more titles for the kinect. And although the 360 has been around for a number of years, they'll be releasing new titles for it for a few more years.
Read more
One person found this helpful
Helpful
Comment Report abuse

Patrice E. Walton
1.0 out of 5 stars Bummer
Reviewed in the United States on October 8, 2020
Edition: 4GB with Kinect Nike+ BundleVerified Purchase
First thing I didn’t get the Nike game! That was a bummer second no hard drive so I wasn’t able to update the system ! Overall disinterested! Not recommended!
Read more

Pete O'Brien
4.0 out of 5 stars As expected
Reviewed in the United States on July 7, 2014
Edition: 4GB with Kinect Nike+ BundleVerified Purchase
The Xbox has worked as expected. It may be a little advanced for our preschool aged kids, but with the Kinect they will occasionally play Disney or Dora Dance Party. We like it far better than the Wii.

I find the Nike+ program to be pretty simple to follow although it's not my cup of tea.

All in all, I'm very satisfied with the purchase although I may have had unreasonable expectations for its use when I bought it.
Read more
Helpful
Comment Report abuse
See all reviews
Pages with related products. See and discover other items: xbox 360 easy games, xbox kinect games, xbox one s bundle packages, xbox kinect sensor, microsoft xbox one s bundle, Best Rated in Xbox 360 Consoles