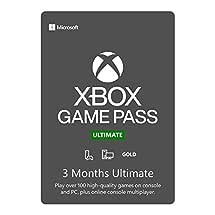 Brand: Microsoft
Platform : Xbox One
| DRM: Xbox Live
4.8 out of 5 stars 7,880 ratings
Available now.
Ships from and sold by Amazon.com Services LLC.
Note: After purchase, you can access the item in Your Games Library.
By placing your order, you agree to our Terms of Use.
This product is non-returnable and non-refundable.
Note: Currently, this item is available only to customers located in the United States.

Xbox Game Pass Ultimate includes all the benefits of Xbox Live Gold, over 100 high-quality games for console, PC, and Android mobile devices, and access to EA Play at no additional cost, all for one low monthly price. Play new Xbox Game Studios titles such as Halo Infinite the same day they release, plus recent hits like Minecraft Dungeons and Bleeding Edge. EA Play gives you access to more top titles on console and PC from series like FIFA, Battlefield™, and STAR WARS™. Get more from the games you love with exclusive in-game challenges and rewards, special member-only content, and early trials of select new EA titles. Enjoy free perks, including in-game content, consumables, and partner offers, as well as member discounts on select games in the Xbox Game Pass library, and related game add-ons. Play together with friends and discover your next favorite game.*

Xbox Game Pass Ultimate includes all the benefits of Xbox Live Gold, over 100 high-quality games for console, PC, and Android mobile devices, and access to EA Play at no additional cost, all for one low monthly amount.

4.8 out of 5 stars
4.8 out of 5
7,880 global ratings
How are ratings calculated?
To calculate the overall star rating and percentage breakdown by star, we don’t use a simple average. Instead, our system considers things like how recent a review is and if the reviewer bought the item on Amazon. It also analyzes reviews to verify trustworthiness.
Top reviews

Amazon Customer
5.0 out of 5 stars It stacks!
Reviewed in the United States on July 16, 2019
Content: 3 MonthsVerified Purchase
It does stack! If you were fooled before then you shouldn't be worried while buying this 👍
Read more
50 people found this helpful
Helpful
Comment Report abuse

Terrance
4.0 out of 5 stars Subscription-based game service for both Xbox and PC.
Reviewed in the United States on April 29, 2020
Content: 3 MonthsVerified Purchase
I guess the best way to describe Xbox Game Pass is to call it the Netflix of Video Games. The Game Pass Ultimate subscription is a combination of Game Pass for Xbox, Game Pass for PC, and Xbox Gold. “Games as a service” seems to the way things are moving now, with Microsoft committing to make their first-party games available on Game Pass on launch day, but there are some drawbacks to this approach as well.

On the surface level, Game Pass Ultimate seems like an unbeatable value, giving you access to 100+ games on both Xbox and PC, but there are some annoyances and negatives too. Firstly, there isn’t a unified way to navigate through all of your Game Pass content. Xbox games are generally handled through the Game Pass store on your Xbox. PC games are handed in the Microsoft store app and they’re often slightly buggy or lacking in terms of control customization, graphics settings, etc. Xbox Gold gives you some free games, but you need to go through a separate process to add them to your account. Games obtained through Games with Gold work a bit differently than Game Pass in the sense that they will always be available to play (they won’t ever leave the service), with the Xbox 360 titles being yours to keep no matter what and the Xbox One titles requiring an active subscription.

*** Update 10/15/2020 ***
Microsoft has been refining the Game Pass experience since I first wrote this review. It is now easier to navigate and browse Game Pass content on both Xbox and PC. Claiming Games with Gold on Xbox no longer requires you to go through the motions of buying the game at $0.00 ~ you can just add it to your account directly. For PC, the Xbox app has been updated so that you can directly browse Game Pass content separately from the Store app. I've tried a few of the "newer" offerings such as MechWarrior 5 and Outer Worlds, and they have a respectable amount of customization for graphics settings, etc. Overall, Game Pass is becoming better and better.

The second negative is that games are constantly being added and removed, though they will give you a 30 day notice before doing so. If you’re more of a casual gamer, it might not be enough time to finish the titles and if you don’t pay attention to the Xbox news channels, you might not even know a game has been removed until it fails to start. Game Pass usually doesn’t contain the add-on content, so if you bought DLC for a Game Pass title that got removed, you won’t be able to play unless you get the main game again, either in digital or physical form.

With respect to this digital code purchase on Amazon, I think it’s pretty easy. The code shows up in your email box (associated with your Amazon account) after you finish checking out. If you have any promo codes such as buy-one-get-one-free, they will also show up in your mailbox. You can redeem multiple 3-month (or whatever) pre-paid memberships and they will stack up. Personally, I go to the Microsoft Accounts site and enter these codes from the subscription management area. In the case that you’ve set up a credit card for reoccurring billing, these pre-paid membership codes will basically push your billing date back.

I've only bought codes like Xbox Live or Microsoft Office directly from Amazon, and I haven't had any issues so far.

Skye
5.0 out of 5 stars Good product
Reviewed in the United States on August 16, 2019
Content: 1 MonthVerified Purchase
Love this option for subscription. I got at least 10 new games that I enjoyed playing and played through. That’s just for the month alone. And it comes with Live? What a deal. ONLY DOWNFALL.. And it’s kind of a biggie.. Is that if you have regular live (like I do. I buy a yearly subscription) it is used simultaneously and will not add to the time you have live but instead still take up that month of regular live you have.
Read more
20 people found this helpful
Helpful
Comment Report abuse

Garrett Williams
5.0 out of 5 stars I have so many games on my Xbox now
Reviewed in the United States on December 18, 2019
Content: 3 MonthsVerified Purchase
This is like Netflix for gaming, except the game is downloaded in full to your Xbox. I was especially surprised to get Rare Replay, which includes most of Rareware's games including Battletoads and Conker's Bad Fur Day. Yes, Nintendo games on an Xbox. I can also play Halo: Combat Evolved(Halo 1 remastered), Halo 2, Halo 3, Halo 3: ODST, Halo 4, and Halo: Reach as part of this subscription. A great deal.
Read more
13 people found this helpful
Helpful
Comment Report abuse

Lucy
5.0 out of 5 stars Love Prime Day
Reviewed in the United States on July 17, 2019
Content: 3 MonthsVerified Purchase
I love prime deals and I love Xbox gold and game pass. Little tricky to figure out but finally realized that all I needed to do was look in my email for my code lol.
Read more
14 people found this helpful
Helpful
Comment Report abuse

Slug Jones
5.0 out of 5 stars You need it.
Reviewed in the United States on December 6, 2019
Content: 3 MonthsVerified Purchase
If you have an Xbox one (or future people, if you have the next gen Xbox) you need the gamepass ultimate. Crazy value if you care about playing games more than owning them for an amazing price relative to the amount you pay. 3 months were on sale for $24 for 3 month codes during Black Friday. That a no brainer. Even at the normal price it’s a definite buy. As long as they keep adding in recent (and sometimes brand new releases) to the pass, I’ll be a subscriber.
Read more
11 people found this helpful
Helpful
Comment Report abuse

Tony C. Ho
5.0 out of 5 stars Easy and quick
Reviewed in the United States on November 27, 2019
Content: 3 MonthsVerified Purchase
These are normally $44 for three months. During this time around Black Friday it was offered for half price. Plus there are a lot of benefits with the ultimate membership so I believe there is good value in subscribing it. For example you can actually download games for the PC as well as for Xbox. There a good list of games that you can select from. I ended up buying around six months worth for this membership.
Read more
10 people found this helpful
Helpful
Comment Report abuse