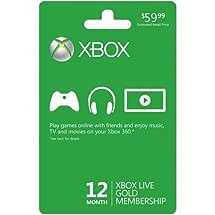 With an Xbox LIVE Gold membership, take your Xbox 360 online to play Kinect and controller games with friends wherever they are. Instantly watch HD movies, TV shows and sports, and with Kinect, your voice is the remote control. Not sure what to play or watch? Quickly find new movies, songs or games with your voice. Even use your phone or tablet as a second screen to control and interact with what you’re watching. Plus, now you can explore the web on your TV with Internet Explorer for Xbox.* Entertainment is more amazing with Xbox.

4.7 out of 5 stars
4.7 out of 5
4,805 global ratings
How are ratings calculated?
To calculate the overall star rating and percentage breakdown by star, we don’t use a simple average. Instead, our system considers things like how recent a review is and if the reviewer bought the item on Amazon. It also analyzes reviews to verify trustworthiness.

Holly Blankenship
1.0 out of 5 stars Can't redeem Xbox one membership
Reviewed in the United States on January 11, 2017
Verified Purchase
Bought this membership for my son for Christmas. Still can't redeem it. Have asked for help. Finally contacted Microsoft to help, they said the card is inactive and can't be redeemed. PNP said there's nothing they can do, won't refund me for anything or send a new one. So we are stuck, now my child won't have something I paid for, because of crappy business. Would not recommend getting anything from PNP. I know I will be spreading the word.
Read more
47 people found this helpful
Helpful
Report abuse

Aaron Schug
5.0 out of 5 stars Works and Saves money!
Reviewed in the United States on April 9, 2013
Verified Purchase
There really isn't a whole lot to say about this purchase. It was $15 cheaper than buying it through Microsoft or any other store. I was sent a 100% new code card in the mail, code worked fine.

I have been a member of Xbox live for over 10 years now and love it. Xbox live is one of the best ways to interact with people. I have met some of my best friends on Xbox Live. There are some annoying jerks that talk trash from time to time, but you can't keep people from speaking their minds. For what you get, it is very much affordable. I found it funny when people gave Xbox live a bad rating because it caused them to to drop loads of money into it for their kids... That isn't really a justifiable excuse to give a 1 star rating. I wouldn't allow younger children to interact or talk as much online for what some people say or how they act. It can be regulated for younger children but in my opinion more for adults. It is well worth the money, especially with all of the applications and features that have been added over the years. You can even buy digital copies of games that often are cheaper than buying them at the store. Again, love Xbox live.

People complain about the fact that to have Xbox live, they require a credit card. They don't randomly charge your card, part of it is for account recovery, and it makes purchasing anything on Xbox live easier. There has not been problems with credit card theft on the 360's Xbox live.

People also complain that you have to pay. That you can play the same games (not true - halo, gears of war, etc) for free on pc or ps3. The thing is, you are paying for security, better servers that don't have as much lag, and a tremendous amount of features that the others systems don't provide. The ps3 servers for example, were hacked, more than once. The servers are not nearly as efficient either. This is all from experience. No matter what, a PC will almost always be better than a console in any respect, so they shouldn't even be compared. Consoles are a much more affordable way to have good games run well. You can easily drop $1500-$5000 on a gaming pc, I built one myself last summer. If you are unsure if you want to pay for it, don't buy a whole year, buy a one or three month pass, try it out, and see if you like it.

Anyways, I have never had a problem with prepaid cards, such as this twelve-month one. I would recommend buying this because it is safe and is only about $50, shipped, whereas the exact same item is about $60 in most stores (I have seen these at a Costco store for only about $55, however).

Be sure to order this before your Live runs out, though, so you will not be without it waiting for this card to arrive in the mail. It took my card 14 days from the day I ordered it to get to my house, which is the longest I have ever waited for something on Amazon, so I was without Live for a couple days because I thought it would arrive sooner.

So, overall I would recommend this if you are a fan of Xbox Live. It's nice to only have to enter this one code and not have to worry about your Xbox Live service running out for a whole year.
Read more
2 people found this helpful
Helpful
Report abuse

Adam Moore
5.0 out of 5 stars Best value option available for xbox live
Reviewed in the United States on April 9, 2010
Verified Purchase
Having an xbox without xbox live is like having a new fancy car with no wheels. Yes it is fun to play around inside, sit there and pretend you are the 'G', but alas the real fun and opportunity begins when you can take it for a drive around the world. Microsoft know this, hence why they charge for the xbox live.

Rather than a review on xbox live, I'm going to comment on this particular product. I ordered the physical card - why? - because for some reason its $10 cheaper than the online code. Amazon - Please change this! Help the environment and our children by offering the online code at the same price. It's quicker; it requires no packaging and should costs you less.

This purchase for me, however, was a money saving one. I went with the cheapest option. Up until now I had used up one three months free trial and xbox had defaulted to monthly billing ($7.99 from memory). Now you don't have to be a mathematician to work out, that $7.99 added up over the year is a lot more than buying this twelve month card. Also, once the card expires it DOES NOT default back to monthly billing - encouraging me to go out and get another 12 month card, saving even more money.

I don't resent Microsoft charging for xbox live, its a great service. I even invested in a Netflix subscription recently to use that service through my xbox - also brilliant (includes HD streaming). I do resent paying almost double for no reason though.

My recommendation - look for the best offer on a 12 month subscription and you will save yourself cash every time.
Read more
3 people found this helpful
Helpful
Report abuse
See all reviews