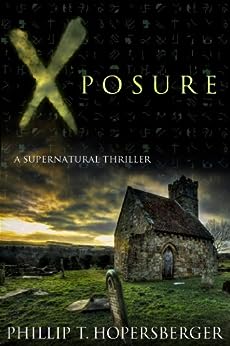 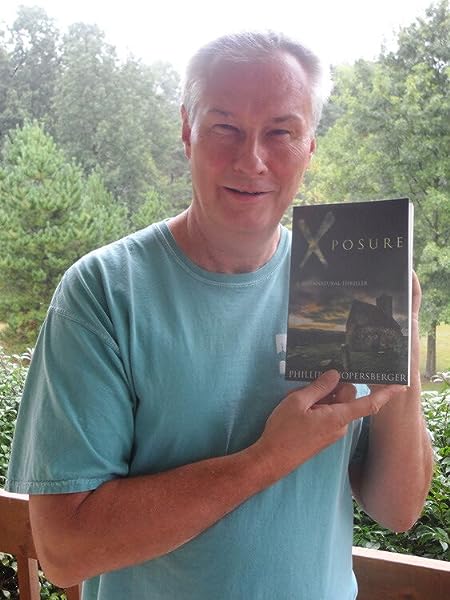 by Phillip T. Hopersberger (Author), Peter Hopersberger (Illustrator), William Phipps (Editor) & 0 more Format: Kindle Edition
See all formats and editions
Sorry, there was a problem loading this page. Try again.
Strange flashes appear in the sky; now so commonplace no one much cares…

Four world leaders are mysteriously summoned to the Vatican…

The third prophecy of the 1917 Fatima vision is finally unsealed…

And a conflicted Soviet “sleeper” agent, US Navy SEAL STAN STANISLAW, reneges on a deal his parents made in World War II, and now without a country, tries to survive long enough to put it all together…to expose a plot that threatens more than an antiquated Cold War agenda. It’s a brand new millennium and the future of the human race is up for grabs.


"Written with the same visual aplomb as his screenplay, SOMETHING GRAY, Phillip T. Hopersberger's new novel XPOSURE will shake your convictions in the old adage that so many fall back upon when tragedy strikes, 'The sun will still rise tomorrow.' Oh...will it really?"
Read more
Previous page
Next page

"TOOK ME TO THE FUTURE...AND SCARED ME!"
-Ron Forseth, Vice President, Outreach, Inc.

"AFTER READING THE PROLOGUE, ICAN TELL YOU ONE OF LIFE'S GREATEST DISAPPOINTMENTS WOULD BE NOT READING THEREST OF THIS BOOK!"
-Don Douglas, SVP-Programs, ICM

This is the first book in a three-part series.  When I originally began the journey, it seemed to write itself.  Now it feels different, like an unseen force is actually opposing me and the completion of my foray into the unknown world all around us.  It's almost as if it is not just a story anymore, but a brush with Truth that is too close, that something, or someone does not want told just yet.  Completing this series has taken on an almost sinister quest that --This text refers to the paperback edition.

You can learn more about the author at his website:  TotallyWriteousCopy.com --This text refers to the paperback edition.

youtube.com/watch?v=5yi1qNbd1k4 --This text refers to the paperback edition.
Read more

PHILLIP T. HOPERSBERGER was born in Detroit, Michigan (100 years ago to the day that Lincoln gave his first inaugural address) and graduated from Michigan State University (1984). After working for Knight-Ridder Newspapers for four years, he went into the ministry and became a pastor (Penn State & Michigan State Universities). In 1998, he resigned his pastorate to pursue a writing career.

His novel, XPOSURE, and his Civil War screenplay converted into an eBook, SOMETHING GRAY, and 52 THINKS ABOUT GOD, are all available on Amazon:

He lives with his family in Michigan where he writes, hunts, fishes, and chases History tales (www.TotallyWriteousCopy.com).

abshepherd
3.0 out of 5 stars Disappointed.
Reviewed in the United States 🇺🇸 on March 23, 2014
Verified Purchase
I went searching through Amazon the other day looking for something that would pique my interest. I've been in a bit of a mood lately where really just nothing looks good. I've got literally over 1,000 books on my Kindle but don't want to read any of them at the moment.

I came across Xposure while perusing sci-fi books and using keywords aliens and post-apocalyptic. I read the sample on Amazon and it looked like something that would be right up my alley - a cross between "Ancient Alien" theories and conspiracy theories. It didn't hurt that the author was from Michigan - my home state.

The concept was awesome - biblical theory, government cover-ups, plus aliens. The execution didn't quite match up. I did like this book - but it had flaws. The biggest of those was the ending. No sense of closure - left open for a sequel that I haven't found any evidence of to date. It didn't dig deep enough into the promised story. I don't know if the author plans a sequel, but this book just doesn't really stand alone very well.

The whole book took place in a matter of maybe three days, and yet the main characters met and fell in love in those three days. Although such a thing can happen it is still a bit far fetched, but it is made even more so considering neither main character is even a very likable character. Sure, you've got the strong military type of guy, but he hates kids and he's trained all his life to be a traitor to his country. Then you've got the pushy reporter. You may feel a little sympathy for her because of the "seizures", but not enough to make up for her personality deficiencies.

Also, the male lead is the only person in the entire military with strategic information that can be useful to an enemy force - and he carries it on his person? Very, very far fetched. I know this is science fiction, but a small amount of believability is still required.

Overall, it was a good story concept, and well written but, for me, it had the potential to be so, SO much more. I liked it, but I was disappointed with it.
Read more
7 people found this helpful
Helpful
Report abuse

John J. Palmer
4.0 out of 5 stars Good book, wanted different ending.
Reviewed in the United States 🇺🇸 on July 11, 2014
Verified Purchase
This was a well written story that kept my interest the entire time. The characters are well developed (though some still shrouded in mystery) and relatable.

I was a little surprised that the "science fiction" in the book was not very prevalent. It is really more of a spy/intrigue novel than scifi, but that is not necessarily a bad thing. However, if you are looking for just scifi you will be let down.

I liked how the story developed and progressed, but I was not very satisfied with the ending. I don't mind that not every question gets answered, but I really expected more resolution than I got. Still, I liked the author's style, and I enjoyed the read.
Read more
Helpful
Report abuse

Leinad Reuanesah
5.0 out of 5 stars Vivid! Worth the read
Reviewed in the United States 🇺🇸 on April 20, 2020
Verified Purchase
The author is a talented writer! His story was a vivid mental picture that played like a movie in my mind as I read each chapter. I rarely read a book in one sitting.....this was the exception! I hope they make a movie from this!!

JeffersonBroadhammer
5.0 out of 5 stars Readers of Left Behind series will enjoy
Reviewed in the United States 🇺🇸 on November 21, 2019
Verified Purchase
The author is a gifted writer which makes for a pleasant read. I finished the book in one night, because great writing makes for easy reading. If you enjoy the Left Behind series, I believe you will also enjoy Xposure. I look forward to the sequel.
Read more
Helpful
Report abuse

spartyfan86
5.0 out of 5 stars Only One Question for This Author
Reviewed in the United States 🇺🇸 on February 14, 2014
Verified Purchase
When is the seocnd installment going to be available???

Engaging supernatural thriller with snappy dialogue and intriguing characters. One of the best novels I have read in a long time. I really enjoyed the historical references to World War II and the present day twists. I would not be surprised if this becomes one of the few authors who get picked up by one of the big publishing houses after first publishing on Amazon. Way to go Mr. Hopersberger.
Read more
Helpful
Report abuse

d. kluth
5.0 out of 5 stars wow -- imaginative and riveting
Reviewed in the United States 🇺🇸 on August 9, 2013
Verified Purchase
Purchased this book from Amazon, for my kindle -- This book surpassed my expectations. Clever beginning to get you hooked, unique storyline with great momemetum that made it difficult to put down. I loved the author's style. Numerous twists and turns to hold your interest. I would love to see this book made into a movie. I seriously believe it would appeal to a wide audience. Rita K.
Read more
One person found this helpful
Helpful
Report abuse

klsurvivor
4.0 out of 5 stars Interesting concept.
Reviewed in the United States 🇺🇸 on July 1, 2014
Verified Purchase
This story is one that is very plausible and appropriate for the time we are in. I had a bit of trouble understanding the story at first but I finally found myself getting into the swing of things.
Read more
Helpful
Report abuse

Kindle Customer
4.0 out of 5 stars Interesting
Reviewed in the United States 🇺🇸 on July 3, 2014
Verified Purchase
Book has an interesting premise, but completely leaves you hanging at the end,so I have to assume there will be a sequel. If that's true I'll buy it. Would like to see the story concluded.
Read more
Helpful
Report abuse
See all reviews

Kindle Customer
5.0 out of 5 stars Great!
Reviewed in the United Kingdom 🇬🇧 on September 13, 2014
Verified Purchase
A very interesting theme for this book, it was very hard to put down and very easy to read! looking forward to the next book!
Read more
Report abuse