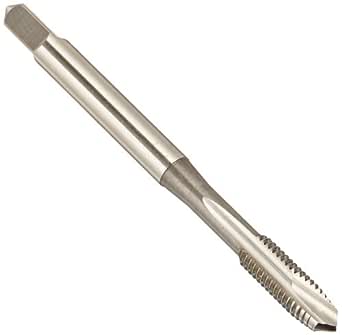 Add to Cart
$5.42
& FREE Shipping on eligible orders. Details
Sold by: Amazon.com
Have one to sell?
Sell on Amazon
Loading recommendations for you

Brand: YG-1
4.7 out of 5 stars 33 ratings
Available at a lower price from other sellers that may not offer free Prime shipping.

YG-1 L7 series vanadium alloy HSS spiral pointed tap for multi-purpose. High-speed steel tools are good for most general purpose applications, offering a combination of hardness and toughness for wear resistance. Uncoated tools feature just the base substrate without any additional treatment or coatings and are suitable for a wide range of applications. Round shanks allow use with a wide variety of toolholding systems. Straight flute tools allow chips to collect in the flutes as they cut and are well suited for most applications in shallow cuts. Right-hand cut tools have a cutting action that engages when they are run in a clockwise direction. Applications: Good for steel castings and forgings/heat-treatable alloy steels, free machining stainless steel, heat and corrosion-resistant stainless steel/valve stainless steel, aluminum alloy castings, nodular cast iron/chilled cast iron/meehanite iron/ductile iron. Excellent for low carbon/free machining carbon steel, medium to high carbon steel.

Curtis
5.0 out of 5 stars Like a hot knife through butter in Aluminum!
Reviewed in the United States on April 29, 2020
Verified Purchase
I had originally purchased comparatively expensive set of taps from another company, and found that those taps were incredibly dull, but decided to proceed with them anyway. I ended up breaking the dull tap in an aluminum extrusion.

After that happened, I went on the search for another brand that looked like they were pretty good quality, and landed on this guy. Fearing the worst, I ordered multiple so that I wasn't left without a tap in case one broke. When they arrived, I opened up the first one, installed it in my tap handle, and started tapping the first hole. This thing cut so easily, I thought I had messed up and grabbed one of the extrusions I had already tapped! After the first hole cut so easily, I decided to give it a shot with power tapping using my M12 drill, and to my surprise it cut all the way down without a single issue, even on high-speed (which has VERY little torque). I ended up tapping about 30 holes in a matter of minutes, with a single tap. I'm definitely keeping the rest that I ordered for future use, and I'm incredibly impressed by how sharp and well made these are!

I've recommended this tap to multiple people already that are using it for the same thing I am (building a 3D printer from scratch), as many of them have had poor experiences with taps themselves. This is a wonderful product, and I would recommend it to anyone!
Read more
2 people found this helpful
Helpful
Comment Report abuse

The Good Life
5.0 out of 5 stars Very sharp and great at clearing chips through a hole.
Reviewed in the United States on April 2, 2020
Verified Purchase
I was able to tap 1083 holes with this thing through 1/2" thick aluminum like a hot knife through butter. I was amazed it held up as long as it did. Normally I will snap a tap long before that many holes were tapped. If you are attempting to tap through holes and looking for a great tap then look no future you found it.
Read more
Helpful
Comment Report abuse

dmann
4.0 out of 5 stars Tapped in Stainless
Reviewed in the United States on May 28, 2019
Verified Purchase
I used this to tap a hole in stainless steel to hold a carbide tip for wood turning. Use cutting oil and go slow it will thread fine..My last HSS bit cracked it half so this was an improvement.
Read more
Helpful
Comment Report abuse

Fun Hobbies
5.0 out of 5 stars Nice tap..
Reviewed in the United States on July 10, 2019
Verified Purchase
Nice tap I wish they had more I would’ve purchased several. Mostly like the form taps for new threads but for recutting you need one of these and they’re good and sharp.
Read more
Helpful
Comment Report abuse

Jason Heiss
5.0 out of 5 stars Seems well made
Reviewed in the United States on April 29, 2019
Verified Purchase
Worked perfectly for cleaning up the rusty threads of the license plate holder on my BMW.
Read more
Helpful
Comment Report abuse

outcorneru
5.0 out of 5 stars Like a hot knife through butter
Reviewed in the United States on June 22, 2018
Verified Purchase
I use it on aluminum extrusions with a drop of Tap Magic Aluminum cutting fluid. Like a hot knife through butter! Couldn't be happier with the results. Very little effort and no binding or breakage. Will be buying more of these.
Read more
Helpful
Comment Report abuse

Healthy Skeptic
5.0 out of 5 stars Nice tap
Reviewed in the United States on January 9, 2020
Verified Purchase
Good quality tool. Did the job cleaning out some titanium threads on a $2000 bike frame.
Read more
Helpful
Comment Report abuse
See all reviews

Page 1 of 1 Start overPage 1 of 1
This shopping feature will continue to load items when the Enter key is pressed. In order to navigate out of this carousel please use your heading shortcut key to navigate to the next or previous heading.
Back
Next
Pages with related products. See and discover other items: Best Rated in Spiral Point Taps