Make it a bundle
We found 2 bundles with this item: 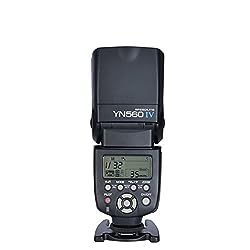 The YN 560IV speedlight took the 560III and introduced a built in controller as well. Now you can have it all in one nice package. Complete wireless radio signal control is built into the speedlight. Using this as a master flash you can control up to 3 groups of speedlights, 560iii or 560iv. You can make all the adjustment to the power output from this speedlight and it will send the information to the ones that you are using off camera. No need to walk over to make those adjustments.. Portrait photographers, Real Estate photographers and more love this speedlight for its ease of use and its tremendous light output.

The YN560 IV can be used as master unit, provides 3 independent groups with controlling ability, realizing remote control the flash mode, flash output and focal length of the YN560 IV and YN560 III.

The YN560 IV can triggered through the set top of the camera, 2.4G wireless triggering, S1 and S2 pre flash cancel mode.

The parameters on the flash will automatically save when the flash turned off; the users can customize setting the flash function as needed.

Sound Prompting System When the sound prompting system is enabled, the different sound ways will prompt different operating state of the flash so as to allow you focus on shooting.

4.4 out of 5 stars
4.4 out of 5
2,213 global ratings
How are ratings calculated?
To calculate the overall star rating and percentage breakdown by star, we don’t use a simple average. Instead, our system considers things like how recent a review is and if the reviewer bought the item on Amazon. It also analyzes reviews to verify trustworthiness.

mark
1.0 out of 5 stars Great product
Reviewed in the United States on September 9, 2015
Verified Purchase
I really like these lights. They're simple to use and give off a lot of light. I bought 6 of them to use with my Canon 5D MKIII. They don't have ttl metering, so if that's your need, they won't work. But for my use, they're great, and you can't beat the price. They're also very well built. I'd highly recommend this product to anyone considering buying a flash.

This is an update. 2-9-16 I have 6 of these units. 3 of them are stuck on full power. They have been that way for many months. The return through Amazon has expired. A google search showed many other users experiencing the same thing.
Read more
89 people found this helpful
Helpful
Report abuse

MN
1.0 out of 5 stars bad, don't do it.
Reviewed in the United States on January 27, 2015
Verified Purchase
I bought these in January 2015. Tested them, seems to work fine. Had no issues with it. I didn't really use it for a gig until April 2015. The one I thoroughly tested works well. The other two? Stuck at full power. The power setting won't change no matter what you set it to. I've owned four of the 560 II for years. After drops and heavy use, I never had an issue. Yet 2 out of 3 560 IV doesn't work right on my first gig and it probably was defective in the first place. I can't return it to Amazon because it's been 4 months and I am waiting to hear from them about the warranty. However, I've contacted them before with another product and got no reply. I expect this warranty to be useless.

EDIT:
Yep. Got a reply by Yongnuo basically telling me that I should take it up with the seller that my flashes are defective. Their 1-year warranty is basically worthless.
Read more
76 people found this helpful
Helpful
Report abuse

Rick
1.0 out of 5 stars Difficult to Turn On, Won't Work with 560 TX, Unreliable as Transmitter
Reviewed in the United States on March 4, 2018
Verified Purchase

I have quite a collection of Yongnuo products: two YN568EXII flashes, four YN560III flashes, YN560TX transmitter, two RF-603II units, and the MR-58 ring flash. They all have performed perfectly for the past 4+ years. I recently purchased the YN560IV so I could use on-camera flash while triggering the 560III units. The first one I received had issues staying on. It would just shut off after a couple seconds, even with fresh batteries. So, I sent it back to Amazon. I bought a replacement, but that one also had issues.

1. Turning it on is not the same as the 560III. Quick On mode doesn't work. If you release the on button too soon or hold the button a millisecond too long, it won't turn on. You have to hold the on button until all the data shows up on screen, otherwise it won't stay on. There is no difference between having Quick On on or off. The 560IIIs, no problem. I have them in Quick On mode, I hold the button until the panel lights up, and it's ready to go. The 560IV? I have to hold for several seconds.

2. When I do get it to turn on, there's a popping sound a few seconds later, almost like the flash tube is firing but it never actually fires. It's very odd.

4. I cannot get the 560IV to work with the YN560TX transmitter. I have the channels, groups and everything identical to the 560III units, set to RX mode, and when I hit the pilot button on the 560TX the 560IV fires along with the 560IIIs, but once I click the shutter on my Canon 5D, the 560IV will not fire. The 560IIIs fire perfectly, but not the 560IV.

VIDEO: I have included a video of the 560TX issue. You will notice all three flashes are in RX mode, same Group, same Channel, same Frquency. When I hit the pilot on the 560TX, all three flashes fire. The LED lights up blue first, to confirm communication with the 560TX, and then quickly turn red as they fire. Once I have the 560TX on my Canon 5D and press the shutter, the 560IIIs fire as normal, but the 560IV does not fire. The LED turns blue, confirming reseption, but never fires the flash. This is quite frustrating. And also, at 46 seconds the 560IV makes that popping noise. Right after I reduce power to 1/4 on the 560TX you'll hear the pop and see the LED turn green.

I will continue to buy Yongnuo products, as I think they are a great value brand. But I'm not the only one having issues with the 560IV. Buy at your own risk
Read more
9 people found this helpful
Helpful
Report abuse

Rolla Gravett
5.0 out of 5 stars Yongnuo Flashes are the Best! I have 5 of them and never had an problem with any of them!
Reviewed in the United States on March 15, 2015
Verified Purchase
I guess you could say I am a Yongnuo big fan. I have 5 Yongnuo flashes (YN 560 I, a YN560 II, and two YN 560 III's, along with this YN 560 IV.) and the TX Transmitter unit. I have never had a problem with any of them and they are very powerful flashes. They are manual, but with digital cameras today, it is very easy to set your flash to the proper amount of power. Just set the flash at mid power and take a shot. Look at it in the LCD or EVF (Electronic View Finder) to see if the exposure is right. If it ts too bright, turn the power down. If it is too dark, turn the power up. That is all there is to it. If you then move in closer, turn the flash down and if further away turn it up one setting.

The best part about the YN560 IV is it can act as a transmitter and a flash all at the same time. I have two YN 560 IIIs and set the YN 560 IV on the camera as the center flash, while at the same time use two YN 560 IIIs as side flashes. If you want the same settings for all the flashes, set all of them to one channel and group. In other words, if I want all of them to be at 1/64 power at a zoom level of 28mm, I set the YN 560 IV for that setting and press the Pilot button. You do have to initialize the YN 560 III flashes first. All the flashes will now be set the same way. If you want more or less power on the flashes on the side, for instance, then you need each flash in its own group. In other words, say Group A for the left flash and Group B for the center flash and Group C for the right flash. Now you can adjust them all individually Set them all on the same channel and they will all go off at the same time.

If you have all three flashes set to Group A, and want more power from the center one on the camera (YN 560 IV), just adjust the setting on that camera flash without pressing the Pilot button. That flash will then have more or less power without affecting the left and right flash units. If you want all the flashes to have the same settings again, press the Pilot button on the YN 560 IV, and it will synchronize the flashes to the YN 560 IV.

There are a bunch of videos on YouTube showing how to adjust or use the YN 560 IV flash. Just do a search on it.

The YN 560 IV will only work electronically with the YN 560 III or YN 560 IV. If you have one of the earlier YN 560 I or YN 560 II flashes, you can opt for the RF 603 II to control those flashes electronically or set them to slave flash to control them with a camera flash or an external flash. You need one RF 602 II for each flash unit. The YN 560 IV will automatically set off a RF 603 II, but they are not controllable, and the flash will have to be adjusted manually.
Read more
127 people found this helpful
Helpful
Report abuse
See all reviews

Kindle Customer
5.0 out of 5 stars Just the job!
Reviewed in the United Kingdom on March 28, 2019
Verified Purchase
This was to augment the yongnuo mkiii that I already own. I wanted a second speed light and this fills the bill at a sensible price. The two work well together.
Read more
Report abuse

Stu McGru
5.0 out of 5 stars Superb Non-TTL flash
Reviewed in the United Kingdom on October 18, 2018
Verified Purchase
If you don't need TTL (I do a lot of Macro, jewellery etc) this is an outstanding flas, never misses a beat and works seamlessly with the Yongnou flash controller YN560 TX II and TX/RX unit
Read more
Report abuse

Ian_H
5.0 out of 5 stars Yongnuo Flash
Reviewed in the United Kingdom on January 25, 2019
Verified Purchase
Works well with my bridge camera and while it is not dedicated it has the ability to vary flash power which is very useful for background lighting etc.
Read more
Report abuse

Page 1 of 1 Start overPage 1 of 1
Previous page
Next page
Pages with related products. See and discover other items: canon external flash, film lights, flash yongnuo nikon, fujifilm digital camera accessories, speed camera, speed flash
Back to top
Get to Know Us
Make Money with Us
Amazon Payment Products
Let Us Help You
EnglishChoose a language for shopping. United StatesChoose a country/region for shopping.
© 1996-2021, Amazon.com, Inc. or its affiliates