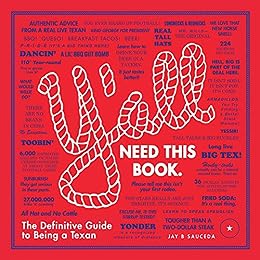 Y'all: The Definitive Guide to Being a Texan Kindle Edition

by Jay B. Sauceda (Author) Format: Kindle Edition
See all formats and editions
Sorry, there was a problem loading this page. Try again.
Read more Read less
Previous page
Next page
Due to its large file size, this book may take longer to download

Tags that will help you discover similar books. 8 tags
travelhumorhistorystate & localparodiessouthamericashumor & entertainment
Results for:
Page 1 of 1Start overPage 1 of 1
Previous page
Next page
Where do clickable book tags come from?
Book tags are created from a variety of sources, some of which are customer-generated. Amazon is not legally responsible for the accuracy of the tags represented. If you are an author or publisher and would like to remove a tag associated with your title, please contact your vendor manager or publisher support team.
Amazon Business: Make the most of your Amazon Business account with exclusive tools and savings. Login now

Jay B Sauceda is a photographer and lifelong Texan. He moved from La Porte to Austin to attend the University of Texas, and “stayed for the ample supply of patio bars and beer specials.” His clients have included BMW, Microsoft, IBM, the San Antonio Spurs, the Times of London, Texas A&M, Texas Monthly, and the University of Texas. He believes in “firm handshakes, Willie Nelson, and telling compelling stories.” --This text refers to the hardcover edition.

4.8 out of 5 stars
4.8 out of 5
461 global ratings
How are ratings calculated?
To calculate the overall star rating and percentage breakdown by star, we don’t use a simple average. Instead, our system considers things like how recent a review is and if the reviewer bought the item on Amazon. It also analyzes reviews to verify trustworthiness.

JKHero
3.0 out of 5 stars Funny -- Good Spirit -- Don't Expect Historical Accuracy
Reviewed in the United States on January 19, 2021
Verified Purchase
Jay Sauceda did a good job with this book, often catching the spirit of Texas and Texans while keeping it funny. Of course, what else would you expect from a man named Jay Sauceda?
He sums up the Texas experience well at the end of the book: "The Texas mystique wasn't built on mediocrity and small stuff ... It was built on the overwhelming...."
However, thou shalt not quote this book in any serious discourse. It contains errors on purpose and errors by accident. For example, he questions the use of armadillos to make boots. He flat-out declares that Lyndon Johnson was the first U.S.President born in Texas, despite Dwight Eisenhower having been born in Texas 18 years before Johnson. His Texas Road Simulator suggests that Texas highways are in a valley with a ridge on both sides. He credits the Comanche as living in Texas "for thousands of years" even though they entered the area about the same time as the Spanish. His CSA and USA flags don't have the correct number of stars. And, as a typical Texan, he has the San Jacinto Monument taller than the Burj Khalifa. His account of the Texas Revolution is more entertainment than fact. And, more ... If you read this book, feel free to add the inaccuracies that you find to this list.
So, with all those problems, why did I not give it just one star? Well, because it's a rip-roaring fun read. And, again, he does capture spirit and mystique of Texas.
Read more
5 people found this helpful
Helpful
Report abuse

Linda O
5.0 out of 5 stars You Truly Need this Book!
Reviewed in the United States on October 9, 2021
Verified Purchase
This book has been one of the most laugh-out-loud books I've read in a while. I am a native, 6th generation, Texan and I cannot begin to tell you how many of these things I say. Oh my word, the author has captured the boldness of the native Texan and has "done us proud". I will say that he did leave out one word that has crossed my lips more that once. "Y'ain't" meaning you are not gonna say, go or do whatever you are presently ponderin' (notice I dropped the "g"). A delightful read. I highly recommend it for Texans as well a other inhabitants of planet Earth. It's good to laugh at yourself.
Read more
Helpful
Report abuse

Kindle Customer
5.0 out of 5 stars The Best Book Ever for a New Texan!
Reviewed in the United States on July 31, 2019
Verified Purchase
This book is fantastic. It was purchased for our granddaughter who just moved to Texas. She loved the book! So many traditions, lots of history, fun facts, and even recipes. It's chuck full of Texas culture, sayings, and maybe some things new to Texans. All in all, it was the prefect introduction for a new Texas resident!
Read more
7 people found this helpful
Helpful
Report abuse

Cara Campora
5.0 out of 5 stars So fun and accurate
Reviewed in the United States on November 16, 2019
Verified Purchase
You guys, this is seriously the best book ever!! It highly exceeded my expectations! For only $13 it’s soooo worth it! I got it as a gift for my sister who just moved to Texas. It’s HILARIOUS and so accurate. We had a blast reading through the pages, laughing almost every page. It’s so fun and accurate, anyone would enjoy this book. My sister can’t wait to leave it on her coffee table for guests to read, I HIGHLY recommend this!
Read more
4 people found this helpful
Helpful
Report abuse

Bargain Shopper in TX
5.0 out of 5 stars FUN! This Book Will Make You Laugh!
Reviewed in the United States on February 12, 2020
Verified Purchase
I have lived here for 15 years and I do know some of the "Special" Texas language. But this book had a lot more that I had never heard. It's a fun read. Our good friends are moving here in June, so I will pass it on to them.
Read more
2 people found this helpful
Helpful
Report abuse

DDNH
5.0 out of 5 stars Definitive book for Texans or wanna be Texans - and it is humorous.
Reviewed in the United States on November 12, 2019
Verified Purchase
Loved this book. I spent a number of of formative years in Texas, and just visited for a couple of weeks. Saw this book on the table at a friend's - scanned through it - had to buy it. Whether you are native Texan, a displaced Texan, a wanna be, or just plan to visit - it's a must.
Read more
5 people found this helpful
Helpful
Report abuse

By Design
5.0 out of 5 stars Native Texan Approved
Reviewed in the United States on December 29, 2019
Verified Purchase
This came highly recommended from a fellow Texan. We gave a copy of it to friends who are moving here, just so they know about our wonderful State.
Read more
3 people found this helpful
Helpful
Report abuse

Dawn L.
5.0 out of 5 stars Great gift!
Reviewed in the United States on April 22, 2021
Verified Purchase
Purchased for my son as he was moving to Texas. It was enjoyed at the going away party, very cute and interesting information and also funnies in it.
Read more
One person found this helpful
Helpful
Report abuse
See all reviews