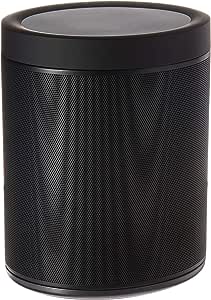 Visit the Yamaha Audio Store
4.1 out of 5 stars 188 ratings
| 52 answered questions
Amazon's Choice recommends highly rated and well-priced products.
Amazon's Choice for "musiccast 20"
Available at a lower price from other sellers that may not offer free Prime shipping.

Buy this product as Renewed and save $19.24 off the current New price.

The small wireless speaker that’s great on its own or as a part of a wireless MusicCast stereo, home theater or multi-room audio setup. Works with Amazon Alexa.

What Will Your MusicCast Be?

Get Music in Your Whole House

Use multiple MusicCast speakers to play music throughout your whole home. Stream and control multiple rooms with the MusicCast app for iOS, Android.

Add a pair to a MusicCast Surround-capable AV receiver to provide wireless surrounds for a 5.1-channel home theater experience.

Add a MusicCast SUB 100 for a bass boost.

Use your Alexa or Google Assistant devices or Siri via AirPlay 2 to listen to music without lifting a finger.

The MusicCast app lets you stream popular music services and listen to downloads or music from your computer or other devices.

Connect with Your Music

Play to your MusicCast 20 speaker through Bluetooth, Wi-Fi, AirPlay 2 or Spotify Connect. The choice is yours.

The MusicCast 20 makes your music and movies more enjoyable - maybe in ways you never imagined.   it's a perfect fit for any space, any decor, and can even be wall-mounted. Pair two together to create a powerful wireless stereo sound. The MusicCast app makes your MusicCast 20 even more versatile. Add a pair to a MusicCast surround-capable AV receiver to provide wireless Surrounds for a 5. 1-Channel home theater system. Or listen to music in any room in your home with a MusicCast multi-room setup. Voice control with Alexa through any echo device adds more flexibility for your life.

4.1 out of 5 stars
4.1 out of 5
188 global ratings
How are ratings calculated?
To calculate the overall star rating and percentage breakdown by star, we don’t use a simple average. Instead, our system considers things like how recent a review is and if the reviewer bought the item on Amazon. It also analyzes reviews to verify trustworthiness.

Stephen
5.0 out of 5 stars Steps to add Speakers to 5.1.2 Surround Sound
Reviewed in the United States on November 27, 2018
Verified Purchase
Great speakers once you get them connected, the problem is that was a huge headache for me (at first). So much so, that I spent 3 days tinkering with these and my wireless network settings to no avail, only to box everything up in frustration with the intent on sending it all back. Fortunately, once I cooled off and waited for the holiday weekday to pass I called Yamaha, and thankfully they got me working.

Initially, I could only get one speaker to add to my wireless network, but the second speaker simply would not add. I thought maybe it was a bad speaker, so I exchanged it at the store, but sure enough the new speaker also would not connect. After 3 days of trying, I finally called Yamaha, and they said it was common, and that a better method was available (though not in any manuals or guides).

1) HARD WIRE the receiver over ethernet and add it to the Yamaha Music Cast app.
2) Temporarily HARD WIRE the first speaker via ethernet as well, then add the device in the music cast app (give it a specific name like “Surround Left”)
3) Click on the SPEAKER in the music cast app, and go to information > network settings (then notate the IP address)
4) Open a browser on your PC, and go directly to the IP address of the speaker
5) Click on network settings
6) Click on "wired" and it should let you change it to "wireless"
7) Enter the SSID, security type, and password of your wireless network, then click OK
8) Disconnect the ethernet cable, & reboot the speaker (it should connect on its own over wireless now)
9) Now REMOVE the speaker from the music cast app altogether
10) Since the speaker is still connected to your wireless network, you should be able to reconnect it back into the music cast app by holding down “connect” on the top of the speaker for 5 seconds.
11) Repeat steps 2-10 with the second speaker
12) Once the receiver and two speakers are showing up in the app, CLOSE the music cast app completely (swipe up on an iOS device)
13) Re-open the app, click on the receiver, choose "music cast surround speakers" and now add the two speakers.
14) Once you see the “successful” message you should be set with wireless surround.

Why these speakers have so much trouble being added wirelessly, or why Yamaha does not add the above steps in their manual is beyond me, but now that everything is connected properly they work great!

ALSO: While the advertisement of the Yamaha Receiver and these speakers say they only work in 5.1 setups, the receiver DOES allow adding two extra "front presence" (i.e. height) speakers, making it 5.1.2 ....... (which is basically like 7.1), FYI

I noticed after a while the speakers began going "in and out" occasionally. To fix this (which may have been overkill, but it worked for me) I moved everything wireless in my house to my 2.4Ghz "N" network, and reserved my 5Ghz "AC" network for nothing but these speakers. I also put a network extender in the room where these speakers are, so that the signal was uninterrupted through walls. Once I did those two things they've never once sounded choppy.

Hope this helps others =)

bbm
4.0 out of 5 stars As wireless surround speakers for a 5.1 setup
Reviewed in the United States on October 2, 2018
Verified Purchase
UPDATE 11/7: Yamaha recently released a firmware update that appears to have corrected the issues I was experiencing with lipsync. I now give this 4.5 stars as wireless surround speakers. If you want a receiver-based surround system, rather than a soundbar, this is really your only real option and frankly I now notice very little difference with these wireless speakers than with my previously fully-wired setup.

I did not see a review yet regarding these speakers when used for wireless surround speakers for a 5.1 setup, so here are my views.

The speakers do a good job but initially I was having some lip-sync problems with the audio for movies and TV, which I did not have when I had wired surround speakers. There is an option on the phone app to adjust the speakers for lip-sync that on the whole does a good job but I notice with some sources that the problem can sometimes persist, though it is a close call (i.e., within a couple of milliseconds off). Why these speakers cause any problems whatsoever with lip-sync -- which implicates the center speaker (which is wired) of a surround setup -- to begin with with is beyond me.

Setup was initially a problem and I did have to re-set them up again when I did not use them for a few days, as for some reason they can became dissociated with the receiver. Price is obviously a lot to pay for the privilege of wireless surround speakers that are for a receiver, but it is very hard to find this feature elsewhere without going the soundbar route.
Read more
22 people found this helpful
Helpful
Report abuse

Fred
5.0 out of 5 stars Easy setup - 15 mins total
Reviewed in the United States on July 17, 2019
Verified Purchase
I just ordered a pair of those to add Surround Sound to my Yamaha RX-V685. I already had MusicCast app on my phone (after having installed it for the receiver 6 months ago).
I followed the instructions on the small one page provided: Turn the speaker on, add a new device on the app, press the connect button for 5 secs, it asked me to switch my wifi to the Musiccast one, connected the speaker, confirmed the Wifi network to connect to, done.
Repeat that for the second one. I now have the Receiver, back left and back right devices in.
I tried to set the surround sound using the app but it was not detecting a compatible device...
Simple fix: I overlooked "Update firmware" info on all these devices including my receiver. Click on update, let it complete, repeat for back left and back right speaker, update completed.
Go back to surround sound setup and everything is available. Select the two speakers and off you go.
Tried a movie, and it worked perfect!!
These speakers sound very good by themselves. As a surround sound add-on, they sound great!
After years of 3.1 due to no wires behind my couch, I finally have my 5.1 setup up and running!!

Update 07/30/19:
I upgraded my Wifi at home, changed my SSID and password. The steps to update the settings in these speakers are as follow:
Go to your Musicast app on your phone, release the speakers from the surround sound setup.
Update the Wireless info on your receiver first (if wireless)
Then redo the steps above for each back speakers (turn on, press connect 5 secs, connect to the speaker wifi, choose the new Wifi SSID, password) and done.
Go back to your app and re-add your back speakers to your surround setup and you're done
Read more
14 people found this helpful
Helpful
Report abuse
See all reviews