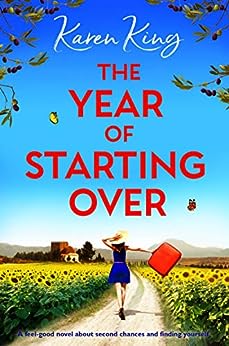 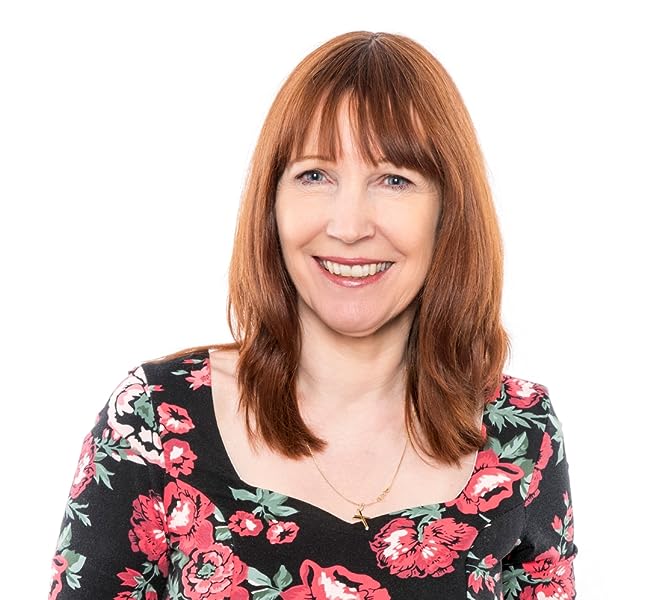 The Year of Starting Over: A feel good novel about second chances and finding yourself Kindle Edition

4.5 out of 5 stars
4.5 out of 5
94 global ratings
How are ratings calculated?
To calculate the overall star rating and percentage breakdown by star, we don’t use a simple average. Instead, our system considers things like how recent a review is and if the reviewer bought the item on Amazon. It also analyzes reviews to verify trustworthiness.
Top reviews

Tracy A Nelson
3.0 out of 5 stars Typical predictable romance
Reviewed in the United States on February 28, 2019
Verified Purchase
The predictable girl and guy break up, girl runs away to find herself, meets new guy who she hates at first then they fall madly in love. I liked the setting. It was a fine light read just nothing new.
Read more
Helpful
Report abuse

Southern Sugar
3.0 out of 5 stars Quick read
Reviewed in the United States on May 21, 2019
Verified Purchase
The ideas ,descriptions and characters are all enjoyable. I love that Holly makes a list to help her grow and progress. I just found the writing...a little stiff, not natural.
Read more
Helpful
Report abuse

love matt and nat
3.0 out of 5 stars Kept my interest
Reviewed in the United States on March 14, 2019
Verified Purchase
Well developed characters. However, it was too predictable , unrealistic for life. Yet in the unrealistic setting, it gives one hope for true love, with a real catch!
Read more
Helpful
Report abuse

Angel Hatfield
4.0 out of 5 stars Good Story and Good Characters
Reviewed in the United States on February 7, 2019
Holly groaned as she seen it was 2:30 am and her boyfriend Scott had just come home and he was drunk. He had obviously went to the club with his friends and she had specifically asked him to be home early as she had to work in the early shift at Sunshine Lodge nursing home. But Scott had protested it was Friday night and not his fault she had to be at work the next morning. Scott worked as an assistant manager of a game shop and often had to work weekends. But than Holly reminded herself she didn’t like going clubbing . She liked making things to brighten up their apartment or creating mugs, clocks, and phone covers that she sold on Dandibug- an online arts and crafts marketplace. Holly hoped she could eventually turn it into a full time business. Holly hated conflict of any kind. Scott and Holly had been living together almost a year and together almost two years. Scott had yet to propose to her and she wanted to be married and have a family. Holly thought he was going to propose later that evening after he had cooked her a nice dinner and was dressed nicely but after dinner he grabbed his coat and said he was going out with his friends as it was paul’s birthday. Holly was mad as he told her he wouldn’t be gone long. But holly awoke the next morning and Scott had not come home and she had no phone messages. Than when he called he said he was in Amsterdam and would need a ride home once he got to the airport and could she pick him up. Holly had enough told Scott she wouldn’t pick him up they were through and she would be gone by the time he got home. Holly was finally done with Scott. Holly went to her mothers to stay until she got herself straightened out. Holly talked to her best friend Susie who had told her a while ago to leave Scott and they agreed to meet. While having coffee Susie told Holly to make a list of things she wanted to do. Afterwards Holly came up with a list of twelve things. One a month should be possible to do Holly thought. She was inheriting some money form her grandfather and had thought she would use for a bigger place with Scoot or even her wedding but not now. She would get a place of her own again soon.Furst to her list and no men. Holly wanted to find herself and who she really was. She had a friend in Spain- Fiona who’s man was Pablo they had bought a place and wanted to turn ot in ot a artist retreat. They had to do a lot of the work themselves. Holly gave notice at her job and then went to Spain, while going up the mountain and Holly was very afraid of heights she almost got into an accident with a man on a motorcycle-Matias- as he raced around the track Holly wasn’t at all happy about driving on the mountain as it was. Once there Holly offered to help make things to brighten up the rooms that had beautiful but dark furniture that had come with the place. Also anything else she could do. Fiona gave her a small apartment close to the big house and Holly was happy about that. Matias was on his way to see his father. While there his father told him to change and join the family law firm or he would be disinherited Matuas choose not to change. Matias is Holly’s neighbor and not a very nice one at least initially. The place was great fiona and Pablo wanted to open it up for an artists retreat - to paint, sculp, and write. Holly and matias spend more time together as time goes on and he has changed how he treats Holly and how he feels about her and she him. Matias also tries to help Holly achieve the things on her list.
I enjoyed this book. I loved the authors description of things like the furniture, and countryside just everything. I did find this dragged for me at times and was a predictable. But in this instance it was pretty much okay with me. I kept reading as I wanted to see how Holly ended up and what she managed to get done on her list. I really liked the characters and the ins and outs of this book and I recommend it.
Read more
One person found this helpful
Helpful
Report abuse

brin.t.murray
4.0 out of 5 stars Feel-good read, about finding yourself
Reviewed in the United States on February 8, 2019
This is a real feel-good read, about finding yourself. Holly has always been desperate to find Mr Right, to the extent of changing herself to find a man. When it turns out that the man she’s been bending over backwards for is a selfish, thoughtless jerk, she finally gets up the courage to walk away and sets about trying to find a different set of life goals, which ultimately coalesce into one simple aim: find out how to be Holly again.
She does this by working through her list of things to do: some big things like live abroad, and learn a foreign language, some smaller things like sample 50 different flavours of ice cream, and ride on the back of a motor cycle. I quite liked that her list was achievable and in a way low-key, based around new experiences and overcoming her fears.
Of course Holly meets a man with some baggage and problems of his own – his ex walked out on him when he was in a terrible accident, and thought he might never walk again. I don’t quite like the fact that in fiction, recovery from an SCI (spinal cord injury) is often rather cast as sheer will and determination on the part of the patient. As someone with personal family experience of SCI, I have to say – if that was all there was to it, there would be no one in wheelchairs. Everyone, but maybe especially a young man, is desperate to walk again. Some people do the physio hard out for years, just to stand still – not deteriorate. Neural damage is neural damage.
But apart from that small caveat – which is not over-laboured at all – this is a gentle, good-hearted read. Not a great deal of dramatic tension – it’s clear quite early on which way the story is going, but there are the usual bumps in the road, mainly brought about by the main protagonists’ own reservations – ‘He’s so cute and thoughtful, it’s almost as if he loves me, but he can’t do can he? We agreed to be just friends so I can’t fall in love…’ But it’s not the sort of story you read for dramatic tension. Holly is a sweet and endearing character and I was gripped by her journey right till the end.
Perfect for curling up in an armchair by the fire, or reading on the beach.
Read more
Helpful
Report abuse
See all reviews

Tina J.
5.0 out of 5 stars Lovely story
Reviewed in the United Kingdom on February 13, 2019
Verified Purchase
OK, when I started this, I really didn't think much of Holly, all she wanted was to "please her boyfriend and get married!" But then the story took off properly and I realised that she was a clever, talented, feisty young lady, and I immediately started to like her,
I also loved the descriptions of Spain (where I was hoping to go on holiday this year but now can't).
I have read most of Karen King's books, and can definitely recommend them all, including this one.
Read more
Report abuse

Toscana
4.0 out of 5 stars Escape to a dream
Reviewed in the United Kingdom on March 7, 2019
Verified Purchase
I enjoyed being transported with the heroine to her new life in the mountains of Spain.
It was fun to experience her ticking off the items on her wish list and even more fun meeting the hunky Matias - also on a mission to change his life.
I read this in a couple of sittings. A light-hearted, escapist read.
Read more
One person found this helpful
Report abuse

Ketto
5.0 out of 5 stars LOVED it!
Reviewed in the United Kingdom on March 6, 2019
Verified Purchase
This is probably my favourite Karen King book so far. I loved Holly and Matias, loved the feeling of being in Spain (so authentic) and all the little details about Holly's designs. It made me want to visit Spain, which is something I haven't done for a long time. I read the book in two sittings and was sorry when it was over.
Read more
One person found this helpful
Report abuse

Doting grannie
5.0 out of 5 stars Sexy and romantic
Reviewed in the United Kingdom on March 7, 2019
Verified Purchase
Love, love, loved this book - sexy and romantic. Holly didn’t want to compromise in her relationships any longer and wanted to be an independent woman. She certainly did that - and met the utterly gorgeous Matias. If only men like him existed and real life could be like that! Complete escapism
Read more
One person found this helpful
Report abuse

Miss K Wilkinson
5.0 out of 5 stars Refreshing read
Reviewed in the United Kingdom on March 9, 2019
Verified Purchase
At first I was unsure of this book at the first few chapters it wasn't grabbing me, but how wrong I was I was left page after page wanting more not being able to wait for the next, thoroughly enjoyed and fell in love with each of the characters, inspiring read and made me think of writing my own life wishes list. Would definitely recommend.
Read more
Report abuse
See all reviews