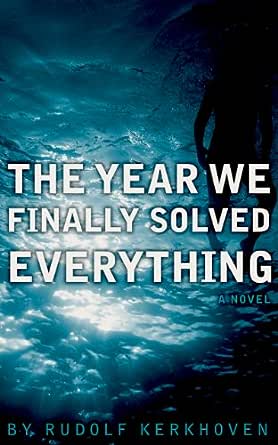 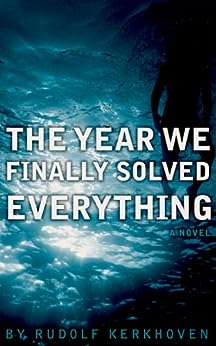 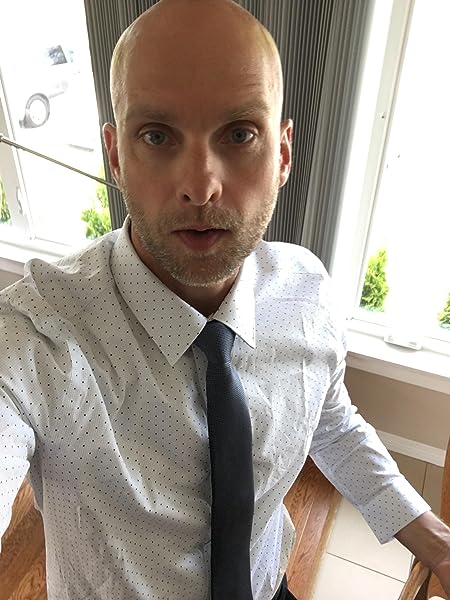 The Year We Finally Solved Everything Kindle Edition

But what is life when we have nothing left to strive for? The Year We Finally Solved Everything will make you ask that question and many more.
--Writing, Reading, and Everything in Between (11/10/2010)

I found the writing style of this author to be excellent.  I enjoyed the natural dialogue, and the imagery was sharp.
--Red Adept Reviews (13/01/2011)

There was never a moment when I thought I should put it down and trysomething else for awhile.  And the end was completely unexpected.
--Shawn Davis Writes (12/10/2011)

Rudolf Kerkhoven is the author of the choose-your-own-adventure ebook comedy, The Adventures of Whatley Tupper (with Daniel Pitts).

3.6 out of 5 stars
3.6 out of 5
29 customer ratings
How does Amazon calculate star ratings?
Amazon calculates a product’s star ratings based on a machine learned model instead of a raw data average. The model takes into account factors including the age of a rating, whether the ratings are from verified purchasers, and factors that establish reviewer trustworthiness.
Top Reviews

Lynxie
2.0 out of 5 stars I liked the idea, but loathed the execution of the book.
Reviewed in the United States on December 26, 2016
Verified Purchase
You know when you have a great idea, and you're really excited to explore that great idea, delve deep into it and have a poke around to see if it really is a great idea?! Well, sadly, I fear that Rudolf could have done a bit more digging and a bit more polishing of what he found.

The outline of the story is reasonable. In fact I'd argue that it's a rather ingenious idea, but alas the way in which it was executed fell far, far below the mark.

The main character, Richard, is a useless imbecile. He's not even funny when he thinks he's being funny. He's abrasive and immature and immediately put me off reading the story. The female characters also leave little to be desired, Mia is snarky and rude, Anna: a poster child for mental health issues managed poorly and don't even get me started on Richard's best friend...

The writing is stilted and repetitive to the nth degree. At several points in the book there's about 15 lines that start with the same few words. The same ideas and concepts are hashed and rehashed and driven so far into the reader's face it's almost as invasive as having your eyes examined by an optometrist.

The way in which society crumbled in the book seemed rather explosive, but not so far outside of the realm of possible that it wasn't believable, at least a little. If the writing were more palatable I might have allowed some of the other issues, but sadly all together this was a pretty average read. I'm quite glad it was a freebie.

I liked the idea, but loathed the execution of the book. I honestly couldn't recommend it, unless you wanted editing practice.

morehumanthanhumanTop Contributor: Graphic Novels
TOP 1000 REVIEWER
4.0 out of 5 stars Original and suspenseful
Reviewed in the United States on October 8, 2014
Verified Purchase
Sometimes I tell people that my hobby is reading and reviewing self-published books and they'll usually respond by asking how many terrible books I read. Well, the answer is -- a lot. But it's all worth it when you find something interesting and original you probably never would have read otherwise.

This is one of those books.

Although Shan-Won, the country that "solved everything" is the catalyst for the story, readers expecting a classic utopia tale will probably be disappointed. This is more about what the announcement that a country HAD solved everything would do to everyone else. Would people leave their homes in the hope of finding something better? Would people try to deny that it had happened? By focusing on the turmoil this announcement unleashes in a single person (and his small circle of friends), Kerkhoven creates a provocative and engaging short novel.

Dan B.
4.0 out of 5 stars Thought-Provoking Novel about Paradise Found
Reviewed in the United States on November 11, 2010
Verified Purchase
What if there were one perfect place on the planet: a place without sickness, hunger, work, or worry? How would the rest of the world respond to that perfection? In The Year We Finally Solved Everything, author Rudolf Kerkhoven attempts to answer these questions - and I think he comes pretty close to the truth.

Richard, the narrator of the novel, lives in Canada, but he could really be in any city across North America. Perfection has been discovered, in the form of Shan Won, a small island nation off the coast of China. Shan Won's perfection is simultaneously attracting people from all over the world and destroying the lives of those who don't want to go. As the world around him swirls into destruction, Richard seeks to become one of the Disappeared - the world's name for those who leave everything behind for Shan Won.

The sparseness of Mr. Kerkhoven's dialogue struck me as uniquely effective, with simple spoken sentences frequently followed by long but readable passages describing the speaker or the setting. His descriptions are so vivid that I had no problem seeing through Richard's eyes. My one complaint is the apparently random use of commas throughout the novel - sometimes they are there when they shouldn't be, and vice-versa.

In the end, this reader was left saddened but not surprised by the world's reaction to Shan Won. But what is life when we have nothing left to strive for? The Year We Finally Solved Everything will make you ask that question and many more.
Read more
2 people found this helpful
Helpful
Comment Report abuse

The Galloping Horde
5.0 out of 5 stars Yearning for Perfection Can Create a Horror
Reviewed in the United States on December 12, 2011
Verified Purchase
The world is falling apart. The economy is in the tank, people are losing jobs, civil society is starting to break down, and people are disappearing. But there is a glimmer of hope - letters and postcards from "The Disappeared"; succinct and to the point, they have found paradise.

Shan Won, a small island near China, doesn't need money. They don't have disease. They are engaged in no wars. There is no hunger. But there is also proof other than the short notes from The Disappeared who make it to the island. Until a CNN journalist returns to tell them that the assumed paradise is Paradise indeed.

Richard wants to go. He needs to go, and as he prepares to go he witnesses the further collapse of society. The world is spinning out of control faster than he ever thought possible.

Surprisingly, since I really liked this book, I have to admit that I really didn'tlike the main character. Richard is simple, vapid, and lazy. Or, perhaps he was depressed, which made him look like he was lazy. In any case, he seemed to drift through his life and just let things happen to him. Even arranging for his passage to Shan Won is an exercise in making plans without actually making plans.

At heart, this story is about the yin and the yang of existence. As Shan Won, the perfect place, grows, the rest of the world decays. The balance of the world is upset.

Although there are moments when this book seemed to drag, there was never a moment when I thought I should put it down and try something else for awhile. And the end was completely unexpected.

Well, except for the love story aspect of the end. I saw that part coming.
Read more
2 people found this helpful
Helpful
Comment Report abuse
See all reviews from the United States

Lianne
4.0 out of 5 stars Dark but enjoyable
Reviewed in the United Kingdom on February 13, 2013
Verified Purchase
This is a pretty intriguing story, and one that struck a chord with me in these tough economic times. Just how would society react to the promise of a perfect place to live, especially when it seems the rest of the world is falling to pieces? Does it really exist, is it right that it does, and what about those that get left behind?

It's quite a short book and not without its faults (it may seem a bit mundane to some, and the main character isn't someone you really warm to, but both seem deliberate by the author to me). However, I read it in just a couple of days, not just because it was short short, but I was hooked right from the start and couldn't wait to finish it.
Read more
Helpful
Sending feedback...
Thank you for your feedback.
Sorry, we failed to record your vote. Please try again
Report abuse

Yeti
5.0 out of 5 stars Loved this book...
Reviewed in the United Kingdom on July 1, 2011
Verified Purchase
I loved this book and could not put it down. It was recommended as an excellent read on Big Al and Pals blog and it did not disappoint. Nothing else to say except read it and hope you love it as much I did!
Read more
2 people found this helpful
Helpful
Sending feedback...
Thank you for your feedback.
Sorry, we failed to record your vote. Please try again
Report abuse