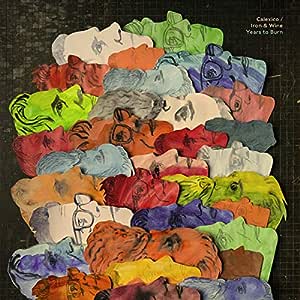 Secure transaction
Your transaction is secure
We work hard to protect your security and privacy. Our payment security system encrypts your information during transmission. We don’t share your credit card details with third-party sellers, and we don’t sell your information to others. Learn more
Details
Ships from
Amazon.com
Sold by
Amazon.com
Return policy: This item is returnable
In most cases, items shipped from Amazon.com may be returned for a full refund.
Read full return policy
Years To Burn has been added to your Cart

Calexico and Iron & Wine first made an artistic connection with In the Reins, the 2005 EP that brought Sam Beam, Joey Burns and John Convertino together. The acclaimed collaboration introduced both acts to wider audiences and broadened Beam’s artistic horizons, but it was the shared experience of touring together in the tradition of Bob Dylan’s “Rolling Thunder Revue” that cemented their bond. Their roads diverged in the years that followed, but they kept in touch and cross-pollinated where they could. Although they often talked about rekindling their collaboration in the studio and on the stage, it wasn’t until last year that their schedules aligned. Years to Burn can’t help but be different from In the Reins. Back then, Calexico entered the studio with a long list of previous collaborations (first in Giant Sand, then backing the likes of Victoria Williams and Richard Buckner), but wondering if Beam’s material was so complete and self-contained that it lacked a way in. Beam had been intimidated by Calexico’s virtuosic playing and their deep comfort in an encyclopedic array of styles. Those fears were dispelled quickly. Calexico was bowled over by Beam’s many talents: “The arranging, the writing, his sense of rhythm, the quality of his vocals—and then there’s the experimental side of Sam,” Joey says. “They were the perfect band at the perfect time for me,” Sam adds. “I loved all their different sounds. They’re musical anthropologists, not regurgitating but absorbing what they discover.” Beam, Burns and Convertino reconvened in Nashville for four days of recording in December 2018. Nobody was keen to retread old ground. The change of venue—In the Reins was tracked in Tucson—was one part of the effort. Together with steel guitarist Paul Niehaus, Calexico trumpet player Jacob Valenzuela and frequent Beam cohorts Rob Burger (Tin Hat Trio) on piano and Sebastian Steinberg (Soul Coughing, Fiona Apple) on bass, they settled in at the Sound Emporium, a fabled studio founded in the sixties by Cowboy Jack Clement. An added ingredient was Grammy-winning engineer/co-producer Matt Ross-Spang (Margo Price’s Midwest Farmer’s Daughter, Al Green, Jason Isbell’s Something More Than Free). As on In the Reins, Beam took the lead on songwriting for Years to Burn, but Burns added one of his own in the end. They took differing approaches: Sam shared meticulous demos ahead of time and was ready with arrangement ideas and instrumental parts, while Joey came in with concepts and an eagerness to improvise. “Life is hard. Awesome. And scary as shit. But it can lift you up if you let it,” Sam offers. “These are the things Joey and I write about now. And the title can encapsulate a lot of things. ‘Years to Burn’ could mean you’re cocky, you’ve got it made. Or, our life is ours to burn, to be inspired. Or you’re burned by life, brutalized. It’s an ambiguous title, because life is complicated.”

4.4 out of 5 stars
4.4 out of 5
174 global ratings
How are ratings calculated?
To calculate the overall star rating and percentage breakdown by star, we don’t use a simple average. Instead, our system considers things like how recent a review is and if the reviewer bought the item on Amazon. It also analyzes reviews to verify trustworthiness.
Top reviews

Tom Goodwin
2.0 out of 5 stars A different approach than other Calexico music.
Reviewed in the United States on August 9, 2019
Verified Purchase
I am a big fan of Calexico but I think their teaming with another group may be an interesting idea that does not work. I miss the vocals of Calexico as well as the instrumentals. I have listened to it once and probably will not listen again. A big disappointment. Maybe others will enjoy it and if so good for them but for me, I prefer the other music of Calexico.
Read more
7 people found this helpful
Helpful
Report abuse

Moi
4.0 out of 5 stars Not a favorite ... Yet
Reviewed in the United States on July 27, 2019
Verified Purchase
This is a decent offering but not my favorite of the recent Iron & Wine offerings. I have not gotten hooked as I normally have. Maybe there is something to be said about quality over quantity. Or perhaps putting out music so fast feels overwhelming and feels disingenuous. I don't know. I wanted to love it but I'll have to come back to it later and try again.
Read more
3 people found this helpful
Helpful
Report abuse

HooDoo
5.0 out of 5 stars Utterly satisfying
Reviewed in the United States on November 5, 2019
Verified Purchase
One of my favorite albums in many years and worth many repeated close listenings. Brilliant lyrics, well-arranged musical flights. Utterly satisfying.
Read more
2 people found this helpful
Helpful
Report abuse

hk
3.0 out of 5 stars Only 8 songs ?!?
Reviewed in the United States on September 9, 2019
Verified Purchase
I wanted to love it and play it ten times in a row as with other Calexico and Iron & Wine releases. Disappointing there were only 8 songs...what can I say?
Read more
2 people found this helpful
Helpful
Report abuse

EyewandersTop Contributor: Camping
5.0 out of 5 stars Ear-candy. I've been waiting for this follow-up for years. Thank you.
Reviewed in the United States on February 1, 2020
A lovely album. The previous collab from these folks is still one of my favorites ("He Lays in the Reins" is one of my all-times ever) and this delivers. I've only had a couple listens and thus far prefer the older one, but more listens are coming.
Read more
Helpful
Report abuse

ositotejano
2.0 out of 5 stars Musical melatonin
Reviewed in the United States on October 24, 2019
I'm more a fan of Calexico than Iron and Wine, and I wanted to love this, but it just does nothing for me. It sounds like musicians making music because they have to, because it's what they chose as a career and not because they're truly inspired. Frankly, it's just dull.
Read more
2 people found this helpful
Helpful
Report abuse

david smythe
5.0 out of 5 stars Outstanding
Reviewed in the United Kingdom on August 6, 2019
Verified Purchase
The combined forces of Calexico and Iron and Wine don't disappoint. I've been a fan of Calexico since The Black Light and they are consistently good. This collaboration with Iron and Wine continues the strong back catalogue and I would recommend both these bands thoroughly. Outstanding.
Read more
2 people found this helpful
Report abuse

Sumo
3.0 out of 5 stars Is 32 minutes of music an album?
Reviewed in the United Kingdom on June 25, 2019
Verified Purchase
I am big fan of Calexico and the “album” is really good. It is shame that it is only 32 minutes long. It might be 8 tracks but it is hardly an album. A bit cheeky by the band to be marketing this as an album.
Read more
5 people found this helpful
Report abuse

M. Roberts
3.0 out of 5 stars Not as good as the band think they are
Reviewed in the United Kingdom on December 11, 2019
Verified Purchase
My first album from this band although I'm a fan of Americana. Watched the band live in London in November and have to confess that I was disappointed. The record itself is not bad but merely emphasised the poor sound quality experienced live.

Come on guys it was the Festival Hall and sound technology has moved on.
Read more
Report abuse

The Gracious Few
4.0 out of 5 stars Mostly good
Reviewed in the United Kingdom on November 21, 2020
Verified Purchase
Two of my favourite artists, could have been a bit longer and could have featured more vocals from Joey (Sam does nearly all vocals) but nothing these two do could ever be less than good and I have been enjoying this album.
Read more
Report abuse

tony smith
5.0 out of 5 stars A well crafted album worthy of ownership
Reviewed in the United Kingdom on July 16, 2019
Verified Purchase
Something a little different from Calexico as you would expect with a collaboration but very much in a good way. I didn’t know much about Iron & Wine before but I feel that it works well. If you like Calexico or Iron and Wine I strongly recommend this well crafted album.
Read more
One person found this helpful
Report abuse
See all reviews