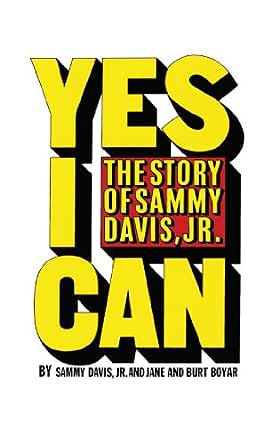 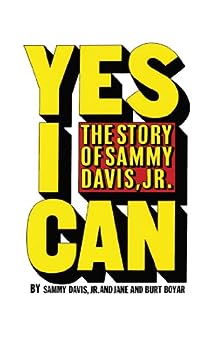 Yes I Can: The Story of Sammy Davis, Jr. Kindle Edition

4.4 out of 5 stars
4.4 out of 5
163 global ratings
How are ratings calculated?
To calculate the overall star rating and percentage breakdown by star, we don’t use a simple average. Instead, our system considers things like how recent a review is and if the reviewer bought the item on Amazon. It also analyzes reviews to verify trustworthiness.

sieler
3.0 out of 5 stars Great autobiography, but the Kindle version is likely unauthorized & RIFE with scanning/OCR errors!
Reviewed in the United States on November 1, 2020
Verified Purchase
TL;DR 5 stars for content, 1 star for the OCR/Kindle due to countless errors.

Through this autobiography, I've learned a lot about Sammy Davis, Jr ... and, surprisingly, about
many of his friends. People like Frank Sinatra, Eddie Cantor, Mickey Rooney, Milton Berle come out as
incredible examples of *good* people. Anyone would be lucky to have friends like them.

In the book, we learn life lessons along with Sammy, as well as some very good tips about performing on stage
(as a magician, I really appreciate these!)

We also see the darker side of his life ... the continual struggle with racism, and the effect on his life.

The Kindle version is the second worst OCR'd book I've ever purchased. I'd be shocked if it was produced by the copyright owner ... it's bad. Really, really bad. Not a paragraph lacks one or more typos (the most consistent is "die" for "the"). In some places, the errors are so bad the reader has no idea what was written or meant.
In a couple of places, it's clear that one or more lines or paragraphs simply disappeared.
Amazon should yank this from sale and ask the copyright owner to create a faithful OCR'd version.

Note: this goes from his birth to about 1962 ... there is a sequel which deals with the second half of his life.

As some reviewers pointed out, there is some duplication of theme ... but I think most of it is forgivable, particularly the sections dealing with racism and segregation.
The book would clearly have benefitted from an editor and footnotes ... at times, he'll mention a name and the reader has no idea who he's referring to. Some details are omitted (e.g., *when* did he get a divorce from
his first wife (Loray)?).

One of my favorite lines: (on racism) "I don't want people to dislike me before I've earned it."

One fascinating insight about racism / freedom in the U.S.A. vs. the UK:
"Social equality is all they have for the Negro there [UK]. In America, although we have
far less social equality, we have constantly expanding opportunity, and that has to be the best."

C. Evans
3.0 out of 5 stars Severely disappointed
Reviewed in the United States on November 27, 2020
Verified Purchase
I was expecting to open and dive into one of the greatest stories of all time about one of the greatest entertainers that has ever lived. Unfortunately I feel like this book was the victim of blatant racism and I’m not talking about the things that happened to Sammy. I’m referring to the amount of typos and incorrect
grammar.

If a publishing company is fortunate enough to have the pleasure of printing the Sammy Davis junior story you would thing it would be written by a bunch of great ghost writers.

However, this is how they paid tribute to him by pairing him with writers who couldn’t write a fifth grade level book. I think this was done intentionally cause there is no way a professional would publish this kind of autobiography. The lack of continuity, scene changed without warning. It was difficult to follow the story. I love Sammy and his story was intriguing I just wish somebody else would have written his story. Sequence was skipped. It wasn’t consistent. One paragraph he was married and the next he was engaged to some one else. No continuity.
Read more
Helpful
Comment Report abuse

C. L. Page
5.0 out of 5 stars A good read and sometimes painful realization about race relations in the USA
Reviewed in the United States on June 9, 2018
Verified Purchase
The first time I read this book, I was seven and I'm glad I purchased it this century, as so much of the racism between skin colors in the USA remains. Mr. Davis led an interesting life, plenty of behind the scenes celebrity anecdotes, and lots of revelations of Mr. Davis from various times in his life. Hard copy and a little too large to read during commute times. I read this one once I was home at night, or while my laundry was washing or drying. Cuidate, CL Page
Read more
5 people found this helpful
Helpful
Comment Report abuse

Francie Nolan
3.0 out of 5 stars What a Life!
Reviewed in the United States on March 1, 2017
Verified Purchase
I love Sammy Davis and loved the beginning of his book. He was a very good writer, but less than halfway through--the book becomes almost entirely conversation. It was too much for me so I give the first part 5 stars and the second half 2 stars. He's great at narrating the conversations, but it quickly became too too much for me.

That said, What a life!! What perseverance!! And strength and talent and heartbreak and dazzling achievement. Oh man.

What is absolutely disgusting is the racism he received. When he was in the army, some of the white soldiers did something so abhorrent, it made me sick. What is wrong with people? Of course, it goes on today, and not only to African Americans. But because of people like Sammy Davis, Jr., it is perhaps not as prevalent as it was.

algoffard
5.0 out of 5 stars Incredible story - incredible man
Reviewed in the United Kingdom on July 13, 2016
Verified Purchase
I bought this book wanting to learn more about Sammy, but ended up learning also about life and society back in the day. Sammy describes in detail the racial discrimination he and his family faced, which warped throughout his periods of fame as a black entertainer. His frustration was clear, and his candid writing does not try to hide it.

The book will leave you disheartened at times, but will ultimately bring you through a journey of triumph. Sammy broke standards and stereotypes, and this book is truly a testament to his work.

I have a much greater appreciation for Sammy after having read his biography. I highly recommend.
Read more
One person found this helpful
Report abuse

A M Harris
2.0 out of 5 stars Sammy
Reviewed in the United Kingdom on November 23, 2020
Verified Purchase
This is a 4 Star biography if it could be read properly I have the kindle edition It is appalling full of typos Whole sentences not making sense Letters and symbols mixed together Starts off okay then gets worse and worse I assume the paperback is Okay as No one else has mentioned it
Read more
Report abuse

Kelly A19
5.0 out of 5 stars A remarkable man. An incredible read. Would make a wonderful movie!
Reviewed in the United Kingdom on December 28, 2016
Verified Purchase
A deeply honest, self-aware, and intelligent man, Sammy Davis Jnr takes us on a journey through the history of his life, but also of Civil Rights. He is brutally honest about the deeply personal impact that racism had on his own actions.
In a book with a perspective more usually shared by amazing women like Carrie Fisher, he strips bare his faults and examines the causes of his debt, his need for recognition and applause. It's an absolutely fascinating book which should be required reading for any student of the Civil Rights movement.
Read more
Report abuse

Amazon Customer
4.0 out of 5 stars Very Interesting Read
Reviewed in the United Kingdom on June 5, 2013
Verified Purchase
The first time I went to the US in the 80s I was shocked at the attitude I saw towards African Americans. This book throws this situation wide open with the story of how Sammy D was treated . As a star in Vegas he was not able to walk through the front door of the casino he was appearing in . Could not buy a drink or place a bet. What a world!!!! A good read
Read more
5 people found this helpful
Report abuse

Tom W
5.0 out of 5 stars Good Present
Reviewed in the United Kingdom on February 16, 2020
Verified Purchase
Got this as a present for a relative, great book, they loved it.
Read more
Report abuse
See all reviews