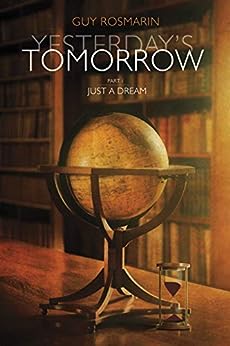 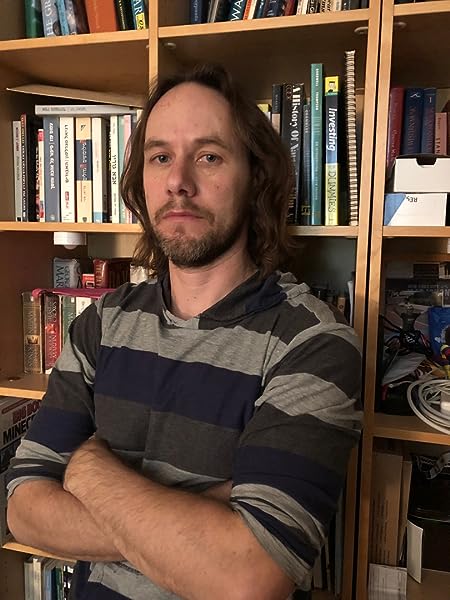 Guy Rosmarin is a writer with a very distinctive style. The first installment of his novel, Yesterday's Tomorrow, was released this past fall and is already generating much interest for its unique fusion of historical fiction with realism, mystery, suspense, and fantasy. Guy is a lover of music - from Bach to Pearl Jam and much in between, a world traveler who backpacked South America, launched a spiritual journey in the Himalayas, learned to scuba in Honduras, found the perfect beach in Thailand, and surfed the perfect wave in Costa Rica. In constant search of his inner voice, Guy often struggles to find the right words, but on good days they end up finding him.
When Guy is not writing, he works as a post audio engineer, recording and mixing short films and commercials for television, radio, and the web.
Guy lives down the Jersey shore with his wife, two kids, their cat and their dog.
If you're down there on a pre-dawn hour beach stroll, you may run into Guy surfing.

Review Rating: 5 Stars
Reviewed By Divine Zape for Readers' Favorite
Professor Andy Spencer has just received a book deal from a reputable publisher. But he has grave problems. He is stuck while the publisher puts pressure on him. He can't find the information he needs to justify the theory that the Nazis' invasion of Russia wasn't Hitler's idea. While he works on finding the information he needs to justify such a thesis, something strange begins to happen. He starts having vivid dreams of being in Nazi Germany, dreams where he gets hurt and is shot at. But then when an elderly lady who survived the Holocaust shows his psychotherapist, Nate, a picture taken during the Nazi era that looks so much like Andy, she knows there is more to Andy than an obsessive writer with a book. Who is he, really? The answers are surprising.

Yesterday's Tomorrow is the first entry in the Just a Dream series, and while the book is listed as sci-fi, it has strong hints of the paranormal and time travel. Guy Rosmarin is a great storyteller and Yesterday's Tomorrow is filled with many plot layers. The suspense is strong and, as I read on, I couldn't help wanting to know when Andy's dream would intersect with his real life. The narrative has strong psychological underpinnings, with a protagonist that is as mysterious as he is complex, but one that readers will definitely want to follow. I loved this story and the unique idea that a character could be unwittingly investigating himself. It is intelligently plotted and written to a satisfying denouement.

Reviewed By Jack Magnus for Readers' Favorite
Yesterday's Tomorrow: Just A Dream, Part 1 is a historical time travel novel written by Guy Rosmarin. Harvard professor Dr. Anderson Spencer had a theory about World War II and was researching the possibility of an internal coup that was behind Hitler's disastrous incursion into Russia. He had spent the last seven years researching it, and the publisher who had hoped for a best-selling follow-up to his first history book was getting impatient. The FBI was also interested in one of the contacts Spencer was using for his investigation, a German named Karl Heime. Some of his friends were concerned about his future and offered ideas for alternative career opportunities befitting the expertise of a man whose knowledge of the Nazi party and the Third Reich was unparalleled. Spencer was determined to get to the resolution of his theory, one way or the other. But something strange started happening to him. His world would suddenly turn dark without warning, leaving him conscious but insensible of where he was or what he was doing. It would come and go, often at the worst possible moment, such as when he was standing before his lecture class as they waited for him to finish so they could go on spring break.

Yesterday's Tomorrow is a riveting and thought-provoking entree into the realm of historical books written about World War II and the rise of the Third Reich. I've long been a student of that conflict and was intrigued by the premise offered by Rosmarin's storyline. Dr. Spencer's time travels into Czechoslovakia are darkly real and stark, and scenes from his real life and those past life episodes merge eerily and seamlessly at times, making this a most compelling read. Rosmarin's characters are authentic and real. Those moments Spencer shares celebrating with his friend Nate's family at their Passover Seder are unforgettable in their warmth and sense of tradition and history. Likewise, his dream episodes, set in war-time Czechoslovakia, have an immediacy that is intense and powerful. This well-written and enthralling story kept me on edge and eager to read on, and I'm quite pleased that it's only the first book in the author's series. Yesterday's Tomorrow: Just A Dream, Part 1 is most highly recommended. --This text refers to the paperback edition.

Harvard historian Andy Spencer has spent his career struggling to unravel the truth behind the Third Reich downfall. On Spring 2001, his research is on the verge of a breakthrough, but life takes a mysterious turn.
Right before sending his class off to spring break, professor Spencer blacks out. The lights suddenly turn off. It turns out it's in his head. Locked out of all his senses, Andy floats in complete darkness for what seems like hours, but when he regains his eyesight, he realizes the ordeal was instantaneous. Though he chooses to dismiss the odd episode as a one-time neural glitch, it is only a sign for what is yet to follow.
The next day he is in the jungles of Costa Rica, trying to land himself an interview with one of the last living witnesses who could support his ground-breaking theory. When they finally meet, the old ex-Nazi commandant swears he recognizes Andy from the war and collapses before giving him anything of substance.
Exhausted and empty-handed, Andy returns to his Boston apartment. He wishes for nothing more than a good night sleep, but the minute he shuts his eyes, he falls through the same dark tunnel he did earlier that week. Only this time, when he reaches the light at the end, he finds himself in a raging battlefield, entrapped in a trench with a group of Czech resistance fighters surrounded by a Wehrmacht battalion. A massive explosion sends him back to his bedroom. It's JUST A DREAM, he sighs, but when he falls asleep again, he is back at the same place to face the devastation - the entire company of Czech fighters he has just met a few minutes earlier is wiped out by the blast.
For the next five nights, Andy keeps returning to war-torn Europe sixty years in the past in a timeline parallel to his present-day life. Everything he experiences in the dream registers in his mind with such clarity and realism, it feels more like he's living an alternate reality in his sleep. Andy fears it's a sign he is losing his sanity, but every visit brings fresh revelations and clues that connect his dream world with the real world, assuring him there's more to it than just a mental disorder. --This text refers to the paperback edition.
Read more

itsme
5.0 out of 5 stars Awesome!
Reviewed in the United States on April 22, 2019
Verified Purchase
A great story. Easy to read and understand. Loved the way it flowed. The only problem, it just whetted the appetite! Where is part two!?l
Read more
Helpful
Report abuse

bark00
5.0 out of 5 stars Fascinating Story
Reviewed in the United States on September 17, 2018
Verified Purchase
I really enjoyed reading this book. The storyline immediately caught my attention and held it throughout. The book is unlike anything I have ever read. I would highly recommend this! I can't wait for the next two parts to find out what happens!
Read more
2 people found this helpful
Helpful
Report abuse

Mom in NJ
5.0 out of 5 stars Great story - good choice for a book club, too!
Reviewed in the United States on October 15, 2018
A compelling read from cover to cover. The mystery slowly unravels and you’re carried through the journey with Andy. I loved this book and heard there are 2 more parts. I can’t wait to see where those take me. Well written and vividly descriptive, you feel like you can smell the scents, see the images and scenes as the characters are and feel like you have entered into the story. Every character is relatable and interesting and the relationships are rich. The story is unique and I felt like I even learned some history. I highly recommend Yesterday’s Tomorrow.
Read more
3 people found this helpful
Helpful
Report abuse

David &Milen Mahn Amar
5.0 out of 5 stars Interesting and surprising
Reviewed in the United States on May 25, 2019
Andy Spencer…Professor of History at Harvard University….studying Nazi Germany and the Holocaust

• Nate…Andy’s best friend who is Jewish

• Andy goes to Costa Rica to interview a an old Nazi General..The general claims he recognizes Andy from a war time experience.

• Any has dreams that he is back during Nazi Germany..they seem very real

• Invited to a present day Passover Seder…..he meets Nate’s grandmother…Grandmother shows him a picture that looks just like him wearing a Harvard sweatshirt from 70 years ago and she too is in the picture

• She wants to go home to Poland but he convinces her to escape to Russia by train as he knows what will happen/has already happened to the Jews in Poland.

• He tells her to go Moscow knowing the Nazi’s will not capture Moscow and the Jews there will relatively safe.

• The book is the first part of a series of books and ends at this point. The dream sequences are very well written. The tension and the suspense are excellent. It makes you want to know the whole story of Andy’s dreams and the outcome of Nate’s grandmother ‘s escape from the Holocaust
Read more
Helpful
Report abuse

Brian Fallon
5.0 out of 5 stars The perfect blend of history and sci-fi.
Reviewed in the United States on March 26, 2019
I truly enjoyed this book. Rosmarin's in-depth knowledge of WWII provides a solid foundation for this wonderful tale of time-travel and adventure. It is well written, imaginative and suspenseful. I anxiously await the next book to see what lies next for Andy Spencer.
Read more
One person found this helpful
Helpful
Report abuse

yula
5.0 out of 5 stars the next netflix hot bestseller
Reviewed in the United States on December 17, 2018
I was so impressed, never heard of this author, but such a fun experience, smooth thriller, couldn't drop the book, and cant wait for the next chapter.
Read more
Helpful
Report abuse

BookReader
5.0 out of 5 stars Great Read!
Reviewed in the United States on October 29, 2018
This book was compelling from page one. A very well written book that leaves you on the edge of your seat.
Can't wait for part II.
Read more
Helpful
Report abuse
See all reviews
Back to top
Get to Know Us
Make Money with Us
Amazon Payment Products
Let Us Help You
EnglishChoose a language for shopping. United StatesChoose a country/region for shopping.
© 1996-2021, Amazon.com, Inc. or its affiliates