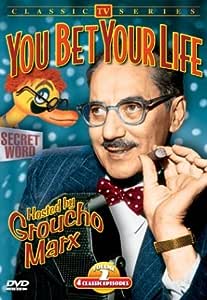 Save with Used - Very Good
$5.99
FREE Shipping on orders over $25.00 shipped by Amazon.
Arrives: Saturday, Jan 30
Ships from: Amazon
Sold by: Katie's stores

You Bet Your Life, Volume 2

Groucho Marx matches wits with the American public in four episodes of this classic game show. Starting on the radio in 1947, "You Bet Your Life" made its television debut in 1950 and aired for 11 years with Groucho as host and emcee. Sponsored rather conspicuously by the Dodge DeSoto car manufacturers, the show featured two contestants working as a team to answer questions for cash prizes. Another mainstay of these question and answer segments was the paper mache duck that would descend from the ceiling with one hundred dollars in tow whenever a player uttered the "secret word." The quiz show aspect of "You Bet Your Life" was always secondary, to the clever back-and-forth between host and contestant, which found Groucho at his funniest. It's in these interview segments that "You Bet Your Life" truly makes its mark as one of early television's greatest programs.

Daniel J. Fiebiger
1.0 out of 5 stars RE-HASH OF OTHER DVDs
Reviewed in the United States on November 21, 2010
Verified Purchase
I wish the DVD producers would get organized and list the episodes by the date they originally aired, the secret word for each episode, and the names of the first two guests, on both the DVD covers and on Amazon and other sales web sites, so collectors of "YOU BET YOUR LIFE" episodes can figure out which ones they have, and which ones they still need to buy,

Far too many 'YOU BET YOUR LIFE" DVDs are just re-hashes of the same episodes that have appeared on other DVDs, and VHS tapes, repackaged with different artwork and names for the covers, some leaving out some episodes to cash in on the interest in "YOU BET YOUR LIFE" episodes by splitting them into multiple volumes from larger compilations.

Several hundred episodes were filmed and aired over a period of almost 14 years, and so it's frustrating to find the same relatively few episodes cropping up again and again on almost every DVD compilation.

This is another one of those re-hash collections, and thus isn't worth the effort to buy.

Until it's re-released with the above-mentioned specifics about all the episodes contained in it, this gets only one star in my book.

Alsatian
3.0 out of 5 stars Disappointing Groucho collection . . . only four episodes.
Reviewed in the United States on October 13, 2014
Verified Purchase
Somewhat disappointing because I really expected more than four shows . . . I had to scroll to nearly the end of the description to see that I had missed that fact. The programs are of high quality and the price was right . . . nearly nothing. But I'd rather spend my money on collections that include a wider survey of the twelve years Groucho held court on this program.
Read more
One person found this helpful
Helpful
Report abuse

B. Chandler
5.0 out of 5 stars Great
Reviewed in the United States on August 26, 2017
Verified Purchase
The best of Groucho
Read more
Helpful
Report abuse

henry vii
4.0 out of 5 stars funny II
Reviewed in the United States on December 29, 2010
Verified Purchase
I really enjoyed seeing the old " You Bet Your Life Videos" . Groucho is very amusing and witty while interacting with the contestants. Being from the 50's and 60's it was interesting to hear some of the politically incorrect comments. Also, the DeSoto commercials are included--hilarious!!
Read more
One person found this helpful
Helpful
Report abuse

jf hacock
1.0 out of 5 stars Buyer Beware
Reviewed in the United States on March 12, 2002
Verified Purchase
I bought Vol. 2 because I was told that the featured set of tapes was no longer available. I figured that since the featured set had 21 episodes on 7 tapes, I'd probably get 8 episodes in Vol. 2. Wrong. This set has ONLY FOUR EPISODES; it's not worth the price. I wonder why the featured set is still being advertised as available in 6 weeks. Can anybody say "BAIT AND SWITCH"?
Read more
3 people found this helpful
Helpful
Report abuse

J. V Wagstaff
4.0 out of 5 stars Groucho doin his job right
Reviewed in the United States on July 23, 2004
Verified Purchase
Volume 2 is a very good DVD to have around the house. It includes 4 episodes just like the first one, but it isn't as funny as volume 1. But for the way it sells at that price, buy it and you wont be mad.
Read more
3 people found this helpful
Helpful
Report abuse
See all reviews

MacGoo
5.0 out of 5 stars MacGoo says
Reviewed in Canada on July 16, 2013
Verified Purchase
They don't get any funnier or smarter than Groucho. His TV show was the forerunner to Johnny Carson comedy on the tube.
Read more
Report abuse
See all reviews

Page 1 of 1 Start overPage 1 of 1
Previous page
Next page
Pages with related products. See and discover other items: groucho marx