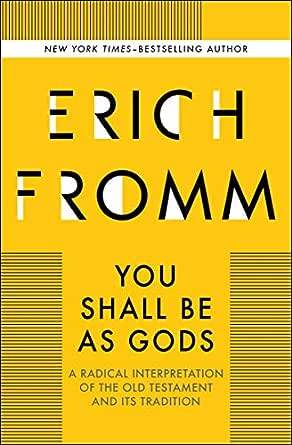 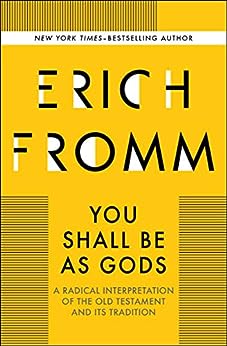 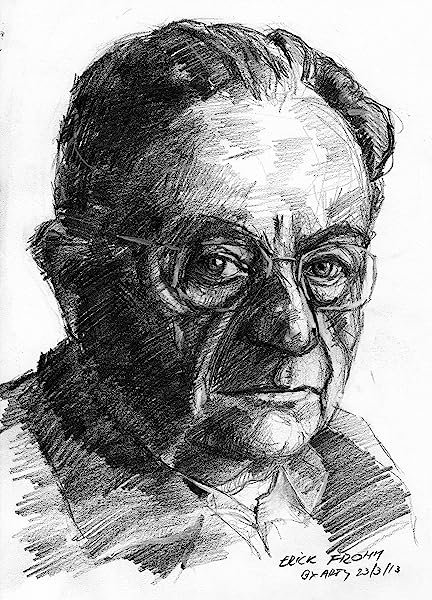 You Shall Be as Gods: A Radical Interpretation of the Old Testament and Its Tradition Kindle Edition

“Erich Fromm is both a psychologist of penetration and a writer of ability.” —Chicago Tribune

Erich Fromm (1900–1980) was a bestselling psychoanalyst and social philosopher whose views about alienation, love, and sanity in society—discussed in his books such as Escape from Freedom, The Art of Loving, The Sane Society,and To Have or To Be?—helped shape the landscape of psychology in the mid-twentieth century. Fromm was born in Frankfurt, Germany, to Jewish parents, and studied at the universities of Frankfurt, Heidelberg (where in 1922 he earned his doctorate in sociology), and Munich. In the 1930s he was one of the most influential figures at the Frankfurt Institute of Social Research. In 1934, as the Nazis rose to power, he moved to the United States. He practiced psychoanalysis in both New York and Mexico City before moving to Switzerland in 1974, where he continued his work until his death.

4.1 out of 5 stars
4.1 out of 5
19 customer ratings
How does Amazon calculate star ratings?
Amazon calculates a product’s star ratings based on a machine learned model instead of a raw data average. The model takes into account factors including the age of a rating, whether the ratings are from verified purchasers, and factors that establish reviewer trustworthiness.

James E. Egolf
5.0 out of 5 stars "Cheap Grace" vs. Ultimate Values
Reviewed in the United States on August 21, 2013
Verified Purchase
Erich Fromm (1900-1980)wrote a facinating study of the Hebrew Bible or Old Testament. His book YOU SHALL BE AS GODS is an interesting view of Old Testament literature. Fromm focused on the concepts and convictions of the Old Testament as opposed to formality and fixation on traditions. Fromm's book was an attempt to integrate such ideas as compassion, kindness, mercy, etc. with traditions to make the Old Testament literature a call to action rather than comfortable apathy. Fromm cited interesting quotes from the Rabbincal Midrash and Talmud.

The beginning sections of the book provided an interesting study of interpretations of God. Fromm argued that God changed from an unrestrained tyrant to a constitutional monarch Who was bound by His own convenents and rules. For example, even God repented re the Flood Story when He repented via Genesis 9:11. When Abraham confronted God re Genesis 18, Abraham bluntly asked God if God would act unjustly by condemning the innocent with the guilty. Fromm cited Moses' attempt to undermine God's wrath. An interesting interpretation of these confrontations is intimacy with the Supreme Being. Closeness to God and His "laws" is a thoughtful analysis.

Yet, Fromm was clear that closeness to God was NOT an attempt to define God. The phrase in Exodus 3:14 that, "I AM WHO I AM" was attempt to deter idol worship. Fromm noted that idols are dead while God and people are creative and active. Men and woman should act and should act according to God's commands and rules. Basically, as Fromm knew, the Ancient Hebrews had different views of God. God could be tied to the land and race of the Hebrews. Or God could be universal as suggested in the narrative re Noah when God made a convenent with the human race. The Hebrew Prophet Habakkuk was probably the first to separate the concept of God from the land and race. Supposedly King David's father was Hebrew, but his mother was a Moabite woman.

Not only did Fromm write about the concept of God, Fromm wrote about the concept of man (men and women). Fromm cited the Creation Story in that everything God created was good except man. God created men and women in His Image, and Fromm interpreted this view that people had to the capacity for good or evil. The goal was for people to live according to the Image of God, but people had freedom to make a choice. God's call that people should be a "Holy Nation" meant that men and women should be better than their current status.

Are men and women predestined? According to Fromm the answer was "No." As Fromm noted, a difference exists between predictions and predestination. In other words, careless behavior and evil acts will eventually result in terrible consequences. Since people are free to make decions, their acts have consequences-good or evil. Much of The Decalogue dealt with social relationships such as murder, theft, adultry, etc. Fromm alerted readers that some of the Old Testament "heroes" had serious character flaws. Noah was confused. Cain was irresponsible. Abraham was a coward when he let the men of Sodom and Gomorrah violate his wife and daughters. King David committed unforgiveable crimes. In other words, men and women can overcome their evil inclinations if willing to recognize their weaknesses and their potential to be better people.

The Epilogue of the book dealt with the 22nd. Psalm and Christ's Passion. From argued that he found the usual interpretation unsatisfactory. Yet, as G.K. Chesterton (1874-1936)noted, Christ's depair was as radical statement as could be, and God was complaining to God. This is obviously a matter of interpretation, and this writer will leave the theologians to debate the issue.

Fromm's book is a good book especially for those readers who are not familiar with the Hebrew Bible or Old Testament. Fromm provided what may be a radical assessment of the Old Testament, but such assessments can force people to carefully read and think which was Fromm's intention.

Alex a customer
3.0 out of 5 stars A humanist interprets the Old Testament
Reviewed in the United States on April 10, 2018
Verified Purchase
It is refreshing to see the Old Testament read as a search for freedom. And yet Fromm's book is too orthodox to satisfy humanists and probably too humanistic to satisfy the religious. Fromm holds a very Jewish perspective; the ideas behind "You shall be..." are peppered throughout his work.
Read more
2 people found this helpful
Helpful
Comment Report abuse

Aron Mueller
4.0 out of 5 stars Makes the best out of religion
Reviewed in the United States on December 11, 2014
Verified Purchase
It demonstrates that if one understands religion and tradition properly as a way to rekindle the human fire not just as a way to dig in its ashes, it can be everlastingly beneficial.
Read more
5 people found this helpful
Helpful
Comment Report abuse

pat allen
5.0 out of 5 stars A radical interpretation indeed but a true one
Reviewed in the United States on September 30, 2018
Verified Purchase
To interpret the bible as an instruction manual to becoming God! Its pretty bold and quite correct I believe simply brilliant.
Read more
One person found this helpful
Helpful
Comment Report abuse

johnny13
5.0 out of 5 stars Eric Fromm is insighful as usual
Reviewed in the United States on September 10, 2013
Verified Purchase
Erick Fromm's exploration and explanation of the old testament is very interesting. He supports his thesis which centers around an interpretation that man will reach God when he accepts and acts in a Godly manner. Although many part are a bit antiquated in terms of the progress of humans and their acceptance of others, it is an insightful look behind the concepts that both the modern and conservative Jews still ponder and debate. If you want to understand some of the driving concepts of Judaism then pick up this quick read.
Read more
6 people found this helpful
Helpful
Comment Report abuse

Burton
4.0 out of 5 stars Four Stars
Reviewed in the United States on December 12, 2016
Verified Purchase
An interest take of the OT.
Read more
Helpful
Comment Report abuse
See all reviews from the United States

Jim Keys
5.0 out of 5 stars Great Service
Reviewed in the United Kingdom on April 3, 2014
Verified Purchase
Great to get this book. I really value the second hand market. It's condition was even better than described. A grateful customer!
Read more
One person found this helpful
Helpful
Sending feedback...
Thank you for your feedback.
Sorry, we failed to record your vote. Please try again
Report abuse

Byron L.
5.0 out of 5 stars Humanism and freedom in the Old Testament
Reviewed in Japan on April 19, 2018
Verified Purchase
In regards to the kindle edition, a few typos here and there but otherwise it is a good edition. As for the work itself, it is enlightening and liberating, among many other things. Of all the books I've read written by Fromm this one has perhaps made the biggest impact to me.
Read more
Helpful
Sending feedback...
Thank you for your feedback.
Sorry, we failed to record your vote. Please try again
Report abuse
Translate review to English