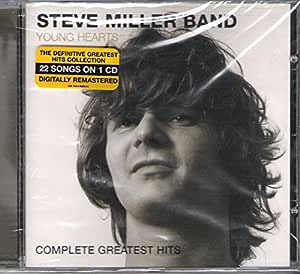 Add to Cart
$25.74
& FREE Shipping on eligible orders. Details
Sold by: RapidPrimePros
Have one to sell?
Sell on Amazon

Subtitled - Complete Greatest Hits. Finally, a Steve Miller best-of with 'Livin' in the USA', 'Abracadabra!', 'The Joker', 'Jungle Love' & much more. 22 remastered cuts covering his 35 years with Capitol all on one CD! 2003.

4.7 out of 5 stars
4.7 out of 5
176 global ratings
How are ratings calculated?
To calculate the overall star rating and percentage breakdown by star, we don’t use a simple average. Instead, our system considers things like how recent a review is and if the reviewer bought the item on Amazon. It also analyzes reviews to verify trustworthiness.
Top reviews

Virtuoso
5.0 out of 5 stars Very thoughtfully anthology of that 70's pop phenomenon
Reviewed in the United States on May 31, 2018
Verified Purchase
I was really surprised that someone could or would put together such a fine compendium of Steve Miller's career. Practically all of his monster AM/FM hits are here, including 'Abacadabra' (which on other greatest-hits releases does not appear). The sound quality is an A. I am very pleased with this CD, and hope to rock-out with it for years to come.
Read more
4 people found this helpful
Helpful
Comment Report abuse

Brian C.
5.0 out of 5 stars All In one Cd.
Reviewed in the United States on May 31, 2019
Verified Purchase
I was able to replace both of my Steve Miller greatest hits cd with this one. It nice to hear all the older songs remastered, and all at the same volume. I rarely rate an album 5 stars, but this one is great value for the money and take me back to a good place in time. "ENJOY" The space cowboy!!!
Read more
One person found this helpful
Helpful
Comment Report abuse

Stella CarrierTop Contributor: Writing
TOP 1000 REVIEWER
5.0 out of 5 stars Fun Hearts
Reviewed in the United States on March 24, 2011
Verified Purchase
This compilation by the Steve Miller Band is very good to listen to. This cd has a very eclectic mix of fun songs to listen with the 22 songs that were chosen for this cd. My personal favorite songs on this greatest hits set are "Abracadabra", "Fly Like An Eagle', and "Jet Airliner". I enjoy the lyrics and the hard rock song of the guitars that are used in those songs. "I Want to Make the World Turn Around" and "Dance, Dance,Dance" are very great to listen to as well. What I enjoy the most about this greatest hits compilation by the Steve Miller Band is the positive message of making the best of your life regardless of what transpires. For example, to me "Fly Like an Eagle" symbolizes the unlimited possibilities of solutions available to make the world a better place (as exemplifed with the lyrics feed the babies, shoe the children, and house the people). "Fly Like An Eagle" also is a good concept for a musical reminder to always be aware of, and be open to following your dreams with lyrics used in the song such as: "Fly Like An Eagle, Let My Spirit Carry Me". I would say to definitely get this cd if you are open to listening to 70's rock music because the songs have a classic rock type of feel.
Read more
6 people found this helpful
Helpful
Comment Report abuse

frankfarkel
4.0 out of 5 stars almost complete
Reviewed in the United States on October 23, 2018
Verified Purchase
pretty comprehensive overview of steve's entire career. ya, there were a few tracks that probably could have been replaced by better ones, but overall a pretty good selection of all the ones you want
Read more
One person found this helpful
Helpful
Comment Report abuse

Johnny Boy
4.0 out of 5 stars Title is misleading, but still a good listen
Reviewed in the United States on June 22, 2009
Verified Purchase
The Steve Miller Band. With a career spanning over three decades, the Steve Miller Band created some of the finest guitar pop/rock around. The group have always been classic rock radio staples, and it's not hard to see why.

In 2003, the group's longtime label, Capitol, released 'Young Hearts: Complete Greatest Hits.' The album contains tracks from the SMB in their psychedelic blues days of the '60s, their radio hits in the '70s, and their mainstream hits of the '80s.

So let's face the facts: As far as single disc compilations go, this one is pretty great. 'My Dark Hour,' 'Space Cowboy,' among others, are here from his early years in the late-1960s, and all of his radio hits are here from the '70s. 'Space Intro/Fly Like An Eagle,' 'Take the Money and Run,' the full length version of 'The Joker' all appear on this set for your listening pleasure.

The sound quality is excellent, too! These tracks were digitally remastered and they sound just amazing!!!

There are some flaws here, too.

Ah sigh. It seems there will never be the perfect Steve Miller Band compilation. 'Abracadabra,' his big hit from 1982, is edited down from five+ minutes to 3:41. And 'My Dark Hour' is edited from three minutes to 2:36.

And there are plenty of tracks missing. For a single disc, this is great. About as good as it gets, actually, for a single disc. But what about 'Heart Like A Wheel,' 'Going To Mexico,' 'Gangster of Love,' 'Mercury Blues,' or perhaps 'Sacrifice'?

The point is, if you are going to have a 'Complete Greatest Hits' for the Steve Miller Band, it can't be a single disc. You need two discs. So in a way, this is a blown opportunity by Capitol. We could finally have a career retrospective of the SMB released on two CDs with all songs in their full length versions.

Overall, for now, this is as good as it gets for a fan of the Steve Miller Band. Now all we can do is wait for a comprehensive two-disc collection with all songs in their full length album versions.

Amazon Customer
5.0 out of 5 stars Excellent
Reviewed in the United States on June 17, 2019
Verified Purchase
This is a great Steve Miller compilation. I bought it for "Abracadabra" and "Living in the U.S.A." which were not on the Greatest Hits that I already had but there are many great songs here.
Read more
Helpful
Comment Report abuse

Jake R.
5.0 out of 5 stars The Name Say's It All.
Reviewed in the United States on March 30, 2013
Verified Purchase
This CD has every track you want from Steve Miller. There's 22 tracks on this CD, Take the money and Run, Abracadabra, Rockin' Me, Swingtown, The Joker, and Fly like an Eagle and that's the first 6 songs. There's also Jungle Love, Space Cowboy, Jet Airliner, Livin' in the U.S.A., and my favorite Shubada Du Ma Ma. This CD is RARE. Don't waste time find it and put it in your collection, now.
Read more
4 people found this helpful
Helpful
Comment Report abuse

dennis p kramer
3.0 out of 5 stars quality
Reviewed in the United States on July 28, 2019
Verified Purchase
I know it was used, but, the case was cracked, and the disc is damaged. I took a chance.DEcluttr usually sends good discs,not this time.however...
Read more
Helpful
Comment Report abuse
See all reviews

Mike Davey
5.0 out of 5 stars The best Steve Miller compilation
Reviewed in the United Kingdom on February 10, 2019
Verified Purchase
I have had a variety of Steve Miller albums over the years, including compilations. My collection has gone right back to the earliest material, through Sailor and up to Fly Like An Eagle, Book of Dreams when he hit it really big commercially.
So a Best Of covering the whole lot is quite a challenge - but this really does do exactly that. If I had to pick a selection it would look much like this. It is not in chronological order, something that bothers some listeners but the running order is well chosen with earlier tracks like The Joker, Livin' in the USA, Space Cowboy well integrated into the overall set. There are hefty selections from Fly Like an Eagle and Book of Dreams, as is to be expected.
Highly recommended as the best of all Best Ofs. I am playing it and marveling again at the absolute consistency and musicianship on display. Unbeatable.
Read more
3 people found this helpful
Report abuse

T.C.
5.0 out of 5 stars Keep On Rockin' With Steve
Reviewed in the United Kingdom on December 27, 2018
Verified Purchase
I saw Steve Live at the O2 with John Fogerty in October and I decided to buy this CD and I wasn't disappointed. It is a good overall of this long career.
Read more
Report abuse

cm
4.0 out of 5 stars Music makes the world turnaround
Reviewed in the United Kingdom on June 20, 2015
Verified Purchase
Product arrived within schedule well packaged and undamaged. Steve Miller is cool and can make the world turn around.
Read more
Report abuse

Bendy
4.0 out of 5 stars Four Stars
Reviewed in the United Kingdom on July 18, 2014
Verified Purchase
Really glad I chose this compilation. I think it gives you everything and is a perfect Steve Miller collection.
Read more
Report abuse
See all reviews

Page 1 of 1 Start overPage 1 of 1
This shopping feature will continue to load items when the Enter key is pressed. In order to navigate out of this carousel please use your heading shortcut key to navigate to the next or previous heading.
Back
Next
Pages with related products. See and discover other items: heart rock band, the eagles band, the eagles