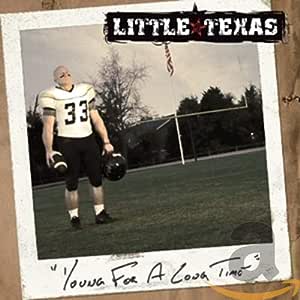 Young for a Long Time

Little Texas Format: Audio CD
5.0 out of 5 stars 18 ratings
See all 7 formats and editions Hide other formats and editions
Includes FREE MP3 version of this album.&nbspProvided by Amazon Digital Services LLC. Terms and Conditions. Does not apply to gift orders.&nbspComplete your purchase to save the MP3 version to your music library.
Available at a lower price from other sellers that may not offer free Prime shipping.

The long-awaited brand new album from country rock superstars Little Texas, their first since 2007's Missing Year. The album includes two bonus cuts - brand new recordings of the band's blockbuster hit singles 'God Blessed Texas' and 'What Might Have Been!'

Since its debut album in 1992, Little Texas has sold over 7 million albums, earned 3 Grammy nominations, won a CMA Album Of The Year award and earned the title The Hardest Working Band In Country by playing over 300 shows a year!

On 11 all new compositions, these veteran rockers celebrate the joys and triumphs of kicking ass in the latter years of life and offers listeners a window in to the real lives of the band that has truly been Young For A Long Time!

Also includes 2 bonus cuts - brand new recordings of the band s blockbuster hit singles God Blessed Texas and What Might Have Been! --Epk

mrmrkie
5.0 out of 5 stars Worth Purchasing
Reviewed in the United States on December 17, 2016
Verified Purchase
I knew Duane when we were young (pun intended) so I decided to buy this after hearing only one song ( Slow Ride Home ). I was surprised that all of the songs are easy to listen to and most are very good songs. At least 4 would be top 10 for at least a few weeks on my Chart Busters. Worth the money for sure.

Corinne Opiteck
5.0 out of 5 stars Sensational CD.
Reviewed in the United States on November 7, 2019
Verified Purchase
I hadn't bought one of their CDs since 1990. I am really enjoying this new one and would recommend it.
Read more
Helpful
Comment Report abuse

Michael Gallagher
HALL OF FAMETOP 1000 REVIEWER
5.0 out of 5 stars Good Drive Time Album
Reviewed in the United States on April 14, 2015
Verified Purchase
It’s been a long time since an album was released by Little Texas. I’ve listened to this one several times already and with its guitars, melodies, and lyrics it’s one of those CD’s you can put in the car and drive for a while tapping along on the steering wheel or catching your right hand air guitar strumming along.

The majority of the songs will remind you of moments in your life whether it be the people, situations, or snapshots in time as, for example, the single “Kings of This Town” reminds me of good times hanging out at a high school friend’s cabin off of the Sabine River in Northeast Texas. The single “Nothin You Can Do” has the traditional LT harmonies that make you want to hit the rewind button and sing along: if today’s radio execs would give this one a chance, I could see it having LT return to the charts.

The last two tracks are reissues of the LT staples of “What might Have Been” and “God Blessed Texas’ with a couple of minor arrangement changes that are nice. Traditional LT fans may be hesitant to purchase this album because after the reunion of the band neither Tim nor Brady are associated with the group – I wouldn’t let that bother you because if you enjoy listening to great musicians with tunes you can hit the highway with or enjoy your favorite outdoor activity, I’d say give this one a shot.

Amazon Customer
5.0 out of 5 stars Great to hear new Little Texas! Awesome album!
Reviewed in the United States on July 20, 2017
Verified Purchase
I was anxious to hear some new Little Texas and they did not disappoint! This was a great mixture of their upbeat/fun songs as well as some nice ballads. I really enjoyed this album!
Read more
Helpful
Comment Report abuse

Everett Britton
5.0 out of 5 stars Well Worth It
Reviewed in the United States on March 31, 2017
Verified Purchase
One of the best comeback records by an artist in recent memory.
Read more
Helpful
Comment Report abuse

Amazon Customer
5.0 out of 5 stars Five Stars
Reviewed in the United States on March 29, 2016
Verified Purchase
My sister was excited to get all her cds ahead of schedule.
Read more
Helpful
Comment Report abuse

Rockmaf
5.0 out of 5 stars Five Stars
Reviewed in the United Kingdom on September 7, 2015
Verified Purchase
Many thanks
Read more
Report abuse