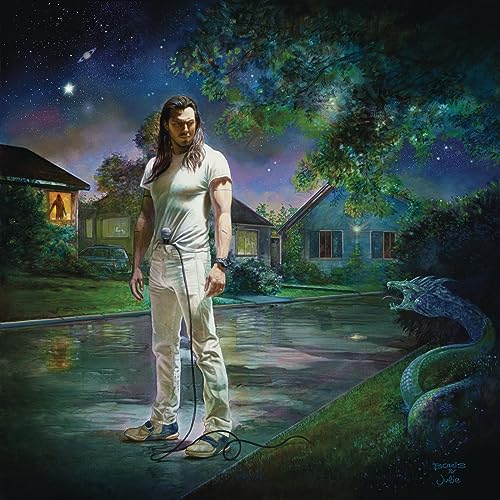 4.7 out of 5 stars
4.7 out of 5
137 global ratings
How are ratings calculated?
To calculate the overall star rating and percentage breakdown by star, we don’t use a simple average. Instead, our system considers things like how recent a review is and if the reviewer bought the item on Amazon. It also analyzes reviews to verify trustworthiness.

FRANK D
2.0 out of 5 stars Andrew WK = Thelema & the Great Beast 666
Reviewed in the United States on November 3, 2018
Verified Purchase
I wanted to like it because Andrew WK makes good music. When I got to the songs "the devils on your side" and "break the curse", I realized there was a darker side of Andrew WK. I've experienced this before and he's referencing Thelema, OTO, & Chaos Magick. Andrew WK even holds up a copy of Liber Al Legis in one of his videos. These are the teachings of Allister Crowley, one of the most evil men to exist. Crowley even referred to himself as The Great Beast 666... this isn't for me.
Read more
6 people found this helpful
Helpful
Report abuse

Richie
5.0 out of 5 stars BUY THIS RECORD
Reviewed in the United States on April 23, 2018
Verified Purchase
This is without a doubt my favorite, and in my opinion, most important album that Andrew W.K. has recorded. This record is a beacon of sunshine breaking through the storm clouds of the negativity that surrounds us all, and it reminds us what really matters in life. I have never before owned a record like this that makes me simultaneously want to cry and climb a mountain, instilling a sense of self value that was always there but needed the right touch of party to come to the surface.
Read more
9 people found this helpful
Helpful
Report abuse

Alex
5.0 out of 5 stars Uplifting and empowering
Reviewed in the United States on April 3, 2019
Verified Purchase
I listen to this album during bouts of deep depression and it fills me with such happiness that I'm literally moved to tears. Some of the spoken word tracks, the first time made me bawl because I'd been having a hard time finding meaning to go on, and he said some of the thoughts aloud that I'd previously thought only i had. A really wonderful, power album.
Read more
Helpful
Report abuse

handsome dan
5.0 out of 5 stars but i'm glad you are
Reviewed in the United States on March 2, 2018
Verified Purchase
andrew rules again- his music is infused with energy, passion and conscientious- plus it kicks a$$

thank you so much for this andrew wk- it's been far too long, but i'm glad you are back
Read more
3 people found this helpful
Helpful
Report abuse

KR
2.0 out of 5 stars Underwhelmed
Reviewed in the United States on July 6, 2018
Verified Purchase
Not the Andrew W.K. I was expecting. I really liked "I Get Wet" and "The Wolf." This was neither. The new album sounds like a soundtrack to a very cheesy musical. Some songs have spoken word sections that literally made me cringe. And I don't use the word "literally" lightly.
Read more
One person found this helpful
Helpful
Report abuse

JFer
5.0 out of 5 stars Best Andrew W.K. Album ?
Reviewed in the United States on December 12, 2018
Verified Purchase
I was dealing with some difficult things on my personal life. And this album really helped me. a lot. every song is a wonderfull celebration of life. Of the power of music, of partying and of love to defeat sadness and depression. Thanks Andrew W.K. this is my third Album . The wolf was ma favorite until now. This is now on first place for me.
Read more
Helpful
Report abuse
See all reviews

Amazon Customer
5.0 out of 5 stars A masterpiece
Reviewed in the United Kingdom on March 5, 2018
Verified Purchase
Andrew W.K. a rockstar with a love for partying who had his biggest hit with rock anthem ‘Party Hard’ back in 2001 returns with his first album in 8 years, ‘You’re Not Alone’.
The albums focus is based around positivity in life, trying not to worry and love each other, all of which Andrew W.K. manages to tie in with partying.
The album starts off with a beautiful instrumental that instantly tells the listener that this will be a cracking listen, then it erupts into the epic ‘Music Is Worth Living For’ an anthem with a massive chorus and uplifting sound. In fact the vast majority of this album is uplifting, there are even spoken word tracks from Andrew W.K. between some songs which probably tie in with his other job as a motivational speaker. Most of what is said in these speeches give fantastic advice and even though some parts are unrealistic, the overall message of them is lovely and positive.
The albums ridiculousness dosent stop there, there are songs that sound like chants, some that sound like hymns and some moments that are plain batshit crazy, but every idea works and after only a couple of listens the tracks will stick in your head.
From the tears of joy wonderful ‘Total Freedom’ with a huge powerful chorus, to the absolutely epic almost theatrical Freddy Murcury esque track ‘Give Up On You’. This album brings in huge anthems left right and centre, this is an album of massive proportions, the songwriting on here is genius.
In ‘Ever Again’ the lyrics are based around Andrew W.K.s own struggles, basically saying that hes been there with mental health problems, he understands and thats why he is using his knowledge to try and help others.
In this hard world we live in, Andrew W.K. brings a beautiful and uplifting album, sure he may be over doing it on the positivity, but then why not, he is saying how life is hard, but you have to try and enjoy it as best you can (which of course is easier said than done, but it is a wonderful message)
I liked Andrew W.K., I had seen him live and he was excellent, but for me, this album has taken his music to that next level, it is crazy, full of variety, full of heart, has epic anthems and is overall an absolute masterpiece.
Read more
10 people found this helpful
Report abuse

Gavin
4.0 out of 5 stars Depression Cure
Reviewed in the United Kingdom on March 29, 2018
Verified Purchase
It's no "I Get Wet" but it has some awesome choons!
Although I have to say the inspirational quotes get old quickly, not being a particularly sad or depressed individual myself.
Read more
One person found this helpful
Report abuse

Clairebeargothicchick
5.0 out of 5 stars Surprising album!
Reviewed in the United Kingdom on March 9, 2018
Verified Purchase
Great album my husband loves it and is seeing him live next month also i was surprised that it wasnt andrew w.k.s well know themes it was a little but more serious I like it too well Andrew to u did great.. thank you Amazon for the pre order!
Read more
One person found this helpful
Report abuse

louisacampbell
5.0 out of 5 stars A very good album
Reviewed in the United Kingdom on October 6, 2020
Verified Purchase
I have been wanting this album for some time to add to my collection and I'm very pleased with it. It met all my expectations it is a really good album.
Read more
Report abuse

Joe Leon
5.0 out of 5 stars Overwhelmingly positive album
Reviewed in the United Kingdom on December 13, 2018
Verified Purchase
Such an incredible album, love it when I go to the gym. I genuinely find that this album improves my mood and inspires me as well as them being brilliant songs. Definitely my favourite Andrew W.K. album and one of my favourite albums of the year
Read more
Report abuse
See all reviews