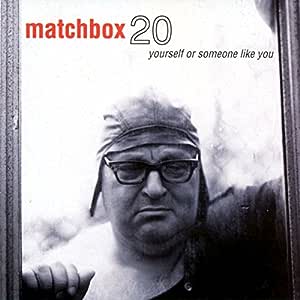 4.7 out of 5 stars
4.7 out of 5
704 customer ratings
How does Amazon calculate star ratings?
Amazon calculates a product’s star ratings based on a machine learned model instead of a raw data average. The model takes into account factors including the age of a rating, whether the ratings are from verified purchasers, and factors that establish reviewer trustworthiness.
Top Reviews

Jake M
5.0 out of 5 stars This is definitive Matchbox Twenty
Reviewed in the United States on March 26, 2019
Verified Purchase
Matchbox Twenty has always been one of those bands who had hits scattered throughout their discography. Unlike their contemporaries like the Goo Goo Dolls, whose Dizzy Up The Girl has hits like Dizzy, Slide, Black Balloon, Broadway, All Eyes On Me, and, of course, Iris, Matchbox Twenty usually only had one or two hits per album. To me, their best songs are If You're Gone, Unwell, and 3 am, which are on three different albums. But Yourself or Someone Like You is THE album. Their first big one, and the one with the most consistently great songs. While I'm a fan of the whole album, its standouts are 3 am, Push, and Real World. It's definitely their biggest album, and as their debut album it established their sound. And the translucent red vinyl is beautiful and somehow perfect for Matchbox Twenty.
Read more
5 people found this helpful
Helpful
Comment Report abuse

Nunny Erbidniss
5.0 out of 5 stars So Good to Finally Get a Reissue!
Reviewed in the United States on September 8, 2017
Verified Purchase
This Vinyl Reissue of a (previously) rare LP has been long overdue, I think. It sounds really good as it must because if you are doing a new vinyl of this particular recording, you have no options but to get it right. The copy my postman delivered today on the release date and on time sounds as good or better than anything. I'd only be 'a little bit angry' if I had paid the price this vinyl was running on the market before today! You don't even wanna' look at that!
I'll say nothing of the artistic content of the music, it is well reviewed elsewhere. Great!
I'll just say that if you like to look for flaws in a record, I challenge you to find anything wrong here.
I use a fairly midrange hi-fi with discreet tube amplification. Grado Gold pickup on a MusicHall mmf2.2 turntable. Using hi-fi power tubes from electro-harmonix matters (ON MY SYSTEM). Which is mentioned to point up the fact that a record is only as good as the system that ATTEMPTS to accurately deliver what the listener thinks sounds right or good.

Leedizzal
3.0 out of 5 stars Make sure your vinyl is not warped like mine
Reviewed in the United States on July 11, 2019
Verified Purchase
Honestly one of my favorite albums ever, even though I don't like to admit it. I was super stoked to be ordering the 20th anniversary vinyl edition of this. 5 stars for the actual album! However got to say the sound quality of the vinyl is not amazing at least to me I feel as though it just sort of sounds strange almost a muted type sound. Also the vinyl pressing I received was fairly wrapped you can see it playing on my turntable, my tone arm looks like it's on a Rollercoaster. I'm getting a replacement and hoping it will be better than this first copy I received.
Read more
One person found this helpful
Helpful
Comment Report abuse

Deep Dish
4.0 out of 5 stars Vinyl review - second copy is a winner
Reviewed in the United States on March 24, 2020
Verified Purchase
The first copy was extremely warped. It was one of the most warped new records I’ve encountered. The cover was bent in the corners as well. The second copy had a decent amount of noise during Hang, but after I cleaned it with my Squeaky Clean, it sounds perfect all the way through. Never in a million years would I have guessed that it’s easier to find a good copy of this album than Wish You Were Here (4 bad copies before I gave up).
Fantastic sounding pressing.

Amazon Customer
1.0 out of 5 stars if you are a Vinyl buff skip this one
Reviewed in the United States on February 17, 2018
Verified Purchase
not a good vinyl record sounds like it was a digital format transfer to analog
Read more
4 people found this helpful
Helpful
Comment Report abuse

Amazon Customer
5.0 out of 5 stars If you Love the Album, You'll Love it on Vinyl
Reviewed in the United States on July 29, 2020
Verified Purchase
To be clear, this is a review of the vinyl and not a review of the album. If you're reading this and haven't heard the album, don't bother reading the rest. As the title reads, if you love the album, you'll love it on vinyl. Why? Because playing an album on vinyl is a purposeful act. At present, no voice assistant will appreciably facilitate that process for you. If you play it on vinyl, you'll listen to the whole thing (or at least the first half) and let it bring you back to how you felt back in late 90s. Forget about whether vinyl sounds better, worse, or the same. It's about the experience. Fantastic album.
Read more
Helpful
Comment Report abuse

Jess Wittman
5.0 out of 5 stars Love this CD
Reviewed in the United States on February 13, 2019
Verified Purchase
My mom used to have the 8-track of this album and all throughout my childhood every time we would go on a long ride we would listen to this until we wore out the tape, that was years ago; so I decided for Christmas this year, I would get my mom this CD and she loves it, now keeps it in her truck and listens to it all the time. Definitely brings back memories and we loved hearing this album again.
Read more
Helpful
Comment Report abuse

Alexzander
5.0 out of 5 stars Looks/Sounds Great!
Reviewed in the United States on June 4, 2018
Verified Purchase
This translucent red LP looks and sounds great! It arrived packaged well. I don't think there is much else to say about an album without reviewing the music itself, which is going to depend on your personal taste... Not sure why someone would order an LP for a band they don't like! haha This would definitely make a good gift for someone that likes Matchbox 20.
Read more
Helpful
Comment Report abuse
See all reviews from the United States

Joadka
5.0 out of 5 stars Who is this singer?
Reviewed in the United Kingdom on November 13, 2018
Verified Purchase
I heard rob Thomas sing If you’re gone, and suddenly I wanted to know more about Matchbox. I bought the cd for that reason. I must say I wasn’t disappointed.
Read more
One person found this helpful
Helpful
Sending feedback...
Thank you for your feedback.
Sorry, we failed to record your vote. Please try again
Report abuse

dave
5.0 out of 5 stars Amazing!!!!!
Reviewed in the United Kingdom on June 6, 2014
Verified Purchase
One of the best albums in my collection, every track is wicked, buy this album! Stand out tracks are 3am, long day and back to good but every track is really good! If you like this check out Tabitha's Secret which was their first band name before matchbox 20 some of their songs are similar to this album and they have the same singer!
Read more
Helpful
Sending feedback...
Thank you for your feedback.
Sorry, we failed to record your vote. Please try again
Report abuse

N. Robbins
5.0 out of 5 stars yourself or someone like you
Reviewed in the United Kingdom on February 1, 2011
Verified Purchase
Where do I start with an album this fantastic.

This is matchbox twenty's debut album released in 1996 and I must say I only heard of the band two years ago and am 17 years old.
This would be an album expected by a band's 3rd or 4th release but for a debut it's simply amazing!

My personal favourites include real world (great opening track for the album), 3AM, Push, Back 2 good, damn & hang - not a bad song on this album, they all could be singles. Rob Thomas is a lyrical genius.

I cannot recommend this album enough, just buy it if you haven't heard of the band before & you won't be disappointed.
I also recommend Third Eye Blind's debut too as it is up to the standards of this record.

Scot mackie
5.0 out of 5 stars Not a single bad track on this album
Reviewed in the United Kingdom on October 22, 2018
Verified Purchase
This is not my first copy of this awesome album. It plays so often I’ve had to replace the worn copy.
Read more
Helpful
Sending feedback...
Thank you for your feedback.
Sorry, we failed to record your vote. Please try again
Report abuse

Veronica
5.0 out of 5 stars NEW MB20 FAN
Reviewed in the United Kingdom on September 18, 2019
Verified Purchase
As someone new to Matchbox 20, I was very impressed with this album, being their first. I love Rob Thomas's voice and the band's passion and energy. Their videos are great too!
Read more
Helpful
Sending feedback...
Thank you for your feedback.
Sorry, we failed to record your vote. Please try again
Report abuse

Cassie White
5.0 out of 5 stars One of the best albums ever
Reviewed in the United Kingdom on March 19, 2006
Verified Purchase
If you dont know who Matchbox Twenty are yet, buy this album.
You wont be disapointed
There are some amazing songs, inculding the bands biggest hits Push and 3 am and ending the album with the beautifull Hang.
Rob Thomas (lead singer) has am amazing voice, whih is still raw and less polished than on the later albums
It defintly deservs the title of one of the best albums ever
Read more
3 people found this helpful
Helpful
Sending feedback...
Thank you for your feedback.
Sorry, we failed to record your vote. Please try again
Report abuse

Amazon Customer
5.0 out of 5 stars Five Stars
Reviewed in the United Kingdom on June 8, 2016
Verified Purchase
Brilliant first album for this band. Rob Thomas has an exceptional voice.
Read more
Helpful
Sending feedback...
Thank you for your feedback.
Sorry, we failed to record your vote. Please try again
Report abuse

Rachel's Grandma
4.0 out of 5 stars Su's views
Reviewed in the United Kingdom on December 8, 2011
Verified Purchase
Loved this CD, stumbled across artist on Real radio and wanted to hear more of them. A good sampler CD. Delivery and price excellent.
Read more
Helpful
Sending feedback...
Thank you for your feedback.
Sorry, we failed to record your vote. Please try again
Report abuse