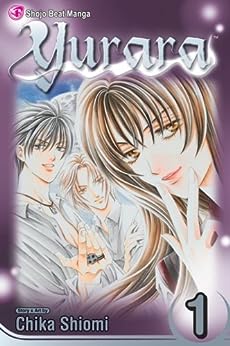 by Chika Shiomi (Author, Illustrator) Format: Kindle Edition
Volume 1 of 5: Yurara
See all formats and editions
Sorry, there was a problem loading this page. Try again.
On Yurara's first day of high school, she finds her assigned seat is occupied--by a ghost! Mei and Yako cannot banish the spirit, and Yurara's other self is released...
Read more
Previous page
Next page
Kindle e-Readers
Fire Tablets
Free Kindle Reading Apps
Available on these devices

In Shiomi's third title to come to the U.S., title character Yurara Tsukinowa is a high school student with the unique talent for seeing ghosts and for feeling their pain. Preceded by her weird reputation (her gift often has her bursting into tears or staring off into space), she's shunned by her classmates—all except for the handsome and playful Mei Tendo and his best friend/arch rival, the cool, attractive Yako Hoshino. As it turns out, the two hottest guys in school share not only the same class as Yurara but also the same ghost-seeing ability. Together, the threesome form a yin and yang type of ghost busting. With Mei and Yako, Yurara discovers her inner self—a self-confident and compassionate girl who can release spirits from their suffering. As in many shojo narratives, the outer Yurara struggles with her insecurities and appears meek and helpless. Shiomi develops her characters in an entertaining and intricate manner and presents the story with clean, detailed art. For readers who like their shojo with an edge, Yurara is Land of the Blindfolded with teeth. (June)
Copyright © Reed Business Information, a division of Reed Elsevier Inc. All rights reserved. --This text refers to an alternate kindle_edition edition.

Chika Shiomi lives in Aichi Prefecture, Japan. She debuted with the manga Todokeru Toki o Sugitemo (Even if the Time for Deliverance Passes), and her previous works include the supernatural series Yurara and Rasetsu. She loves reading manga, traveling and listening to music. Her favorite artists include Michelangelo, Hokusai, Bernini and Gustav Klimt. --This text refers to an alternate kindle_edition edition.

Kuro_Neko003
3.0 out of 5 stars New Manga Review: Yurara vol 1
Reviewed in the United States 🇺🇸 on June 24, 2007
Verified Purchase
"Yurara" by Chika Shiomi is a manga under the Shojo Beat brand from Viz in the US. The first volume introduces the main characters, Yurara, Mei, and Yako. Yurara is an innocently dense high school girl who can see see ghosts and sense their emotions. Mei and Yako can also see ghosts and they have fire and water "magic" that can elimate ghosts. Yurara is protected by a guardian spirit that comes out and covers Yurara in the body of a tall beautiful woman when Yurara in is danger. The guardian spirit is fiesty and rowdy, the very opposite of Yurara. This guardian can also point lost spirits to "the other side." Mei is a very flirty with Yurara and her guardian spirit while Yako is more reserved. Of course, since there are three main characters, there is a triangle relationship between the three. This, though, is more like fan service than an element that furthers the story along.

After reading the first volume, I would say that this is not a compelling manga to me. There's no depth to Yurara or the male leads, although, they are trying with the sensitive Yako character. There also appears to be no underlying story arc, but rather a series of day-to-day accounting of ghost stories. I will read the second volume when it comes out to confirm this. I think, though, "Her Majesty's Dog" is a better series if you like shojo ghost-mystery manga.
Read more
4 people found this helpful
Helpful
Report abuse

Robbie B.
5.0 out of 5 stars Good Story!
Reviewed in the United States 🇺🇸 on January 7, 2009
Verified Purchase
Yurara may not be for everyone, but it was for me. I really liked this first volume and am interested in all the characters. Yurara Vol. 1 made me laugh, but I laugh at almost everthing (what is funny to me may not be to you). Chika Shiomi draws manga very 80's but her work is clean and only has what there needs to be not a detail more. Pick up Yurara, it might surprise you. It surprised me.
Read more
Helpful
Report abuse

mikoyoukai
4.0 out of 5 stars Good.
Reviewed in the United States 🇺🇸 on March 31, 2013
Verified Purchase
This series was an interesting read. You'll be voting for Mei or Yako! I felt bad for Yako, but I was a Mei fan...
Read more
Helpful
Report abuse

Since being a child, high-school girl named Yurara Tsukinowa, has been able to see, hear and feel ghosts and spirits. What she doesn’t know is what’s inside of her in relation with her strong ability and powers of sensing spirits. Upon arriving to another year at school, she encounters three issues: one: a popular girl is complaining on being in the same classroom with her, two: the two most popular and handsome boys at school are sitting at her row and she’s in the middle of them, and three: there’s a very angry spirit sitting on her desk. As the days passes, the spirit gets more and more violent against her, who supposedly has taken her seat; meanwhile Yurara gets to know more about this popular guys who aren’t that normal: they both can see and fight spirits. Yako Hoshino tells the story of the boy who stole money and committed suicide in the same classroom they are studying which may be related with the spirit of the girl haunting her, but to her dismay, after she starts to run as she got scared of the tale, she gets attacked-but to Yako’s surprise he sees the head of a woman with long black hair appearing to protect Yurara. But the issue doesn’t end there, the spirit decides to attack a second time in which Yurara sees the story of the spirit, and when she’s about to fall to the floor a new strange person appears instead of the cute, shy, blond haired Yurara, instead, is found a long black hair beauty with long legs and arms- very tall and powerful woman who helps the spirit to go to heaven. After Yako explains what must be that strange beauty that emerges sometimes from Yurara, she will encounter different situations that involves, high-school girls jealous of her, boys and spirits. Her strange transformation will save her from drying in the water while trying to pass to heaven a small child found in the swimming pool. And, with this two completely personalities the boys start to unravel their feelings and emotions when it comes to being one or another. What and how will they react every time this strange phenomenon happens again?

Opinions:
I may have a long list of mangas that I love but I have to say that Chika Shiomi is by far one of my top 5 most loved and adored mangaka. Since I read this manga (long time ago) I have always loved it- you don’t know how many times my heart goes ‘doki-doki’ and heart-broken at the same time. I ALWAYS cry at the end of the story. This story besides the beautiful art, it caught my attention that Yurara, a very young girl who has to deal with ghosts, spirits and more frightening things, with school, boys and girls, is a girl who wasn’t scared of the spirits, rather one that wanted to help them; one that wanted to have the power needed to give them aid. Also, while the stories are a bit sad in this volume, I still laughed SO much when I saw their faces and how well I can imagine the way they would use a tone and their expressions are. Believe me, you can even notice the slight differences of expressions made by the ever stiff Yako! And while I was rereading this I got tears in my eyes when I saw the last page; “Today Yako… seems a bit more… kind than usual”. The reason is because I remember always when I finished the whole series, I was very, very sad. That is, until I saw that a new series that would have my favorite character: Yako, would appear- I was truly happy to have more bits of his amazing world and life even though is …well, sad. And a very particular scene in the other series called Rasetsu, she says the same about him. Enjoy!
Read more
Helpful
Report abuse

Lesley Aeschliman
4.0 out of 5 stars A story of a girl who can see spirits
Reviewed in the United States 🇺🇸 on November 28, 2010
I came across a copy of this manga volume while browsing the shelves at my local library. Out of curiosity, I checked it out to see what it was all about.

The main character of the series is Yurara Tsukinowa. She's a quiet girl who has the ability to see spirits and sense their emotions. However, she tries to keep this talent hidden, hoping that her peers won't see her as someone weird or abnormal. However, after she meets Mei Tendo and Yako Hoshino (two guys with spiritual powers to ward off vengeful spirits), she reveals her secret to them. When she reveals her secret, Yurara discovers she has the power to release souls.

While there are a number of manga where the protagonsists can see spirits or ghosts, I really liked how the concept was executed in this manga volume. If you have an interest in manga where the protagonist can interact with the supernatural, and you have an appreciation for the shojo genre, then I would recommend Yurara. If I can ever come across future volumes of this manga, I wouldn't hesitate to read them.