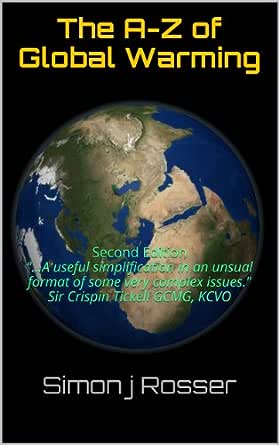 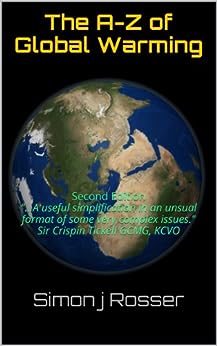 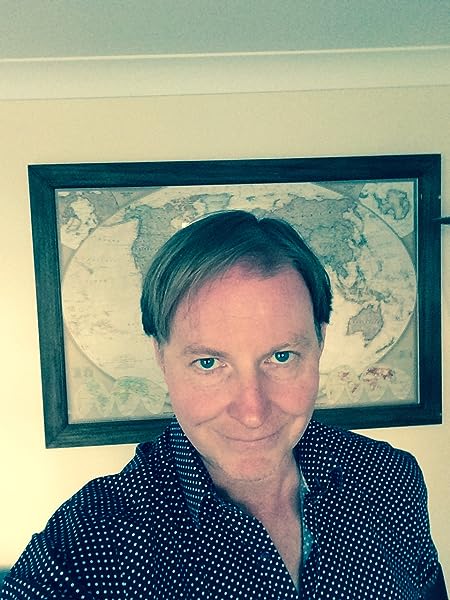 Si Rosser is also the author of TIPPING POINT, the first book in the Robert Spire series, IMPACT POINT and MELT ZONE, the third Spire novel. The adventures don't necessarily need to be read in order, but it is preferable. The author is currently working on the fourth Spire thriller - CATACLYSM Of The ANCIENTS, together with apocalyptic thriller, VAPORIZED

"The chapters I have seen amount to a useful simplification in an unusual format of some very complex issues." ----Sir Crispin Tickell GCMG, KCVO

"This is an excellent, witty and imaginative book that looks at climate change through the lens of simplicity without the jargon and scientific detail which so often dogs this subject. It has a humour and tongue in cheek approach which highlights both the importance of the subject, but the need to engage the reader and not fill him or her with a hopeless sense of guilt. Enjoy!" ----Tim Smit CBE Chief Executive of the Eden Project, Cornwall UK. --This text refers to the paperback edition.

3.9 out of 5 stars
3.9 out of 5
11 customer ratings
How does Amazon calculate star ratings?
Amazon calculates a product’s star ratings based on a machine learned model instead of a raw data average. The model takes into account factors including the age of a rating, whether the ratings are from verified purchasers, and factors that establish reviewer trustworthiness.
Top reviews

Hill Country Bob
2.0 out of 5 stars Comprehensive and informative
Reviewed in the United States on December 6, 2013
Verified Purchase
Interesting and informative book.

The basic premiss of the book is that Global Warming is real and it is caused by the actions of man kind. Man kind has been burning more and more carbon based fuels and this has led to the increase in CO2 in the atmosphere from the historic of around 280 ppm or so to about 400 ppm as measured in Hawaii. This increase in CO2 is considered by some to be the cause of the increase in temperature on the earth. The argument is that if we continue to emit CO2 that the earth will continue to warm until we reach a tipping point and there will be run away global warming, and great damage to mankind and the earth, and possibly the extinction of mankind, etc. Since about the turn of the century, there has been no more global warming, the earth has stopped warming up for reasons that are not well understood or documented. No evidence is presented that mankind is the cause of the increase in the earth temperature, and that it is not a naturally occurring event.

That being said, the author does a good job in addressing a complex topic to a level the should be understandable by the lay person. He deals with many relevant topics in this book.

*Amazon dealing with trees, plants and their use of CO 2 to grow;
*Biofuels their forms and uses and whether or not they are really friendly to the earth as the are pluses and minuses; *Carbon Dioxide and where it all goes and how forrest destruction is a factor;
*Electrical vehicles and transport where he addresses transportation and emissions that are associated;
*Fossil Fuel definition and where they are used including transportation, homes and industry;
*Greenhouse Gases where he addresses the different types and their effects;
*Historical climate change where he looks at some history from the records left in ice cores and other indicators on the earth and what they tell;
*Intergovernmental Panel on Climate Change (IPCC) which was created by government to look at only narrow issue and reports generated;
* Jet Trails and cloud formations nad what they mean;
*Kyoto Protocol signed by many countries in the world. It is interesting that no country who signed met the goals. Only the US who did not sign met the goal in reduction of CO2 mostly due to the use of natural gas in place of coal; *Level of the Oceans and how it is measured, and how much change is projected in coming decades;
*Milankovitch Cycles which must be understood to understand what they mean to the earth;
*No More Ice addressing sea ice and its importance;
*Ocean Thermocline Circulation where the ocean temperatures and water movement are addressed;
*Population Growth where the earth's population growth and its impact on water, food and temperature are addressed;
*Quelccaya Ice-Cap where glaciers are addressed;
*Renewable energy where solar, wind, geothermal, etc are addressed. Nuclear is addressed kind of as an oh by the way. To properly address the energy sources and energy needs for now and the future, hard numbers must be addressed. The hard numbers are not addressed in this book. If they were addressed, nuclear has a lot to recommend it as compact power source, competitively priced and with no CO2 emissions from an operational plant;
*The Sun and solar cycles, sun spots and its role which is very complex and contains many nuances is addressed; *Temperature where the earth's current and prior temperature are addressed;
*Unconvinced is where arguments are assembled which he finds convincing and believes everyone should;
*Vectors for Disease where mosquito borne diseases which he believes are affected by global warming are addressed. This is not a strong part of the book as other people have shown mosquito borne diseases are not tied directly to the temperature;
*Weather effects, statistics, sea temperature, hurricanes are addressed. It should be noted that the number of hurricanes and their strength are not increasing in recent years;
*Xtinction is where he addresses extinction of life on earth in the past. The effect of an asteroid impacting the earth is addressed;
*You Can Help is where the author gets into addressing things that readers can do to mitigate the production of CO2 etc. This issues are small ball that people can do to minimize their individual CO2 footprint and usage;
*Zero Hour is where he pitches the paradigm shift on energy required.

All in all an interesting and informative book. It seems to me that based on what he believes and argues in this book that he would be a enthusiastic supporter of moving all electricity generation from coal to nuclear, either uranium or thorium for base power in the long term. However, this is not addressed. In the shorter time period, supporting the use of natural gas which only generates about half the CO2 as coal in generating electricity would seem to be attractive to him. Somehow, we need to provide cheap and plentiful energy for everyone in the world. This include those who have adequate electricity, and those who have little or none in the world.
Read more
One person found this helpful
Helpful
Comment Report abuse

Alan D. Eastman
4.0 out of 5 stars Interesting, but could be better organized
Reviewed in the United States on May 14, 2016
Verified Purchase
Very interesting, but the alphabetical organization is not especially satisfying. It's difficult to progress from one area to another with the topics scrambled.
Read more
Helpful
Comment Report abuse

Marti
5.0 out of 5 stars Clear and accessible
Reviewed in the United States on April 16, 2014
Verified Purchase
An easy to use explaination of what is coming our way. Good references lend credibility. Good place to start for many.
Read more
2 people found this helpful
Helpful
Comment Report abuse

A. King
4.0 out of 5 stars Did the job
Reviewed in the United States on April 14, 2012
Verified Purchase
It gave me some helpful tips for my anthropology paper. However, my instructor was not a fan. She said she found this to be overly bias and too crowded with rhetoric, whatever that means. I got a B so that is all that matters. Thank you Simon for your work. I found it to be helpful.
Read more
5 people found this helpful
Helpful
Comment Report abuse

Dallas Fraser
5.0 out of 5 stars Great Book
Reviewed in the United States on February 24, 2013
Verified Purchase
it explained what I knew a bit about to a higher level.. now I've got info to debate about with sceptics (although they won't be convinced) easily understood . and liked the links to further information
Read more
One person found this helpful
Helpful
Comment Report abuse

Tyler R. Lemburg
1.0 out of 5 stars Not very scientific
Reviewed in the United States on February 20, 2013
Verified Purchase
I was looking for a non-biased book discussing the science of global warming, and one that would display, in understandable terms, the current climate science. First of all, this book is not written by a scientist. The author is a lawyer who cites his ability to pore through documents as enough to write a treatment on them, summarizing global warming. If you have any scientific background at all, I would stay away from this book. The author goes so far as to say that "carbon dioxide, or CO2, is a gas comprised of one carbon atom and two oxygen atoms," then cites this fact from Wikipedia.

Only buy this book if you have no science background, and want to get a very basic, top-level primer into what global warming actually is. The rhetoric and explanations are not meant for those who know what they're talking about.
Read more
6 people found this helpful
Helpful
Comment Report abuse

Emappeal
4.0 out of 5 stars Creative, Inspirational, Educational
Reviewed in the United States on October 1, 2008
Mr. Rosser's passionate and "ordinary person" approach to this subject is refreshing. He explains concepts of global warming in plain terms and the key points at the end of each chapter are very helpful.
Evidently, the author is also the artist. The drawings throughout the book are very appealing and nearly tell the story all on their own.

The book is just the right length and has nice feel to it. With so many books currently available on this subject, this one stands out as a favorite.
Read more
3 people found this helpful
Helpful
Comment Report abuse
See all reviews from the United States

Kkat
5.0 out of 5 stars Excellent book
Reviewed in the United Kingdom on February 8, 2013
Verified Purchase
I have read this book for my science project and anything I needed I found in this book. Excellent source of information. I would buy more science book from this author !!!!!!!!!!!!!
Read more
2 people found this helpful
Helpful
Sending feedback...
Thank you for your feedback.
Sorry, we failed to record your vote. Please try again
Report abuse