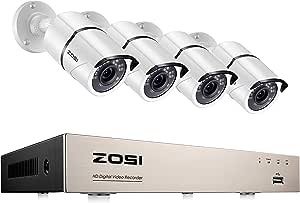 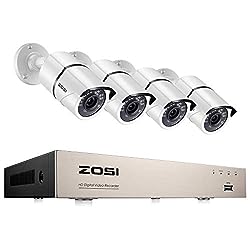 4.2 out of 5 stars
4.2 out of 5
495 global ratings
How are ratings calculated?
To calculate the overall star rating and percentage breakdown by star, we don’t use a simple average. Instead, our system considers things like how recent a review is and if the reviewer bought the item on Amazon. It also analyzes reviews to verify trustworthiness.

Denali Dad
5.0 out of 5 stars Great system for the price - please read
Reviewed in the United States on February 4, 2018
Style: 8CH+8Cameras+2TBVerified Purchase
I got the Zosi 8-channel 1080p camera system with 2TB DVR. Given the affordable price, I considered this system to be entry level, but likely good enough for surveilling my home. I was right; I’ve had it installed for a few weeks now and I am satisfied with it.

I did not want a wifi camera system so I bought this hard-wired system. Wires are more reliable and I don’t need 8 or 9 more devices on my wifi router. I bench-tested every camera and wire before permanently installing anything. The cameras work well. The resolution is good but since the lens has a very wide angle, the corners of the image are less sharp than the center. But this is acceptable to me because the wide lens covers a lot of area.

The BNC cables work acceptably, but I found that 65 feet was not long enough. To get to the four corners of my home’s exterior (3200 sq ft), I needed to purchase some other-brand 100-ft and 150-ft cables. I found that both the Zosi and the aftermarket cables are susceptible to visible feedback in the images, especially when the wires are bent near the connectors. I got them all to work acceptably, but you get what you pay for.

The DVR I initially received was easy to set up and worked well, except that it would reboot itself every couple of hours. Zosi customer service helped me address it and eventually shipped me a new DVR unit at no cost. This has solved the problem. They are helpful and responsive, but they are located in China so emails generally have a 1-day turnaround time. Reviewing recorded footage works but it is not intuitive. There are a lot of unmarked icons to figure out. But it works.

The app works but it is a little clunky. Each time I open it when away from the home wifi, I have to tell it to connect to the cameras. At first the app couldn’t see the cameras away from home. Zosi had to help me tweak settings on the DVR and my router (like disabling the firewall!) to get it to work. It does work reliably now. Again, you get what you pay for.

There is also a desktop application for viewing the cameras, but you can only load it via the supplied mini-CD (what is this, 1999?) and it only shows the footage in low resolution. But it works.

Overall, for the price I am happy with this system. I can view my house at home live on my TV, away from home on my phone, or later via playback. A high-end professional system would have cost several thousand dollars. This system meets my needs and could be used by any homeowner or small business.

Denis Dimick
5.0 out of 5 stars Here is the home security system for you.
Reviewed in the United States on December 24, 2017
Style: 8CH+8Cameras+2TBVerified Purchase
The I purchased this system, was someone broke into my son's new/used car 2 weeks after he bought it, stealing over $500 in electronics; GPS, Radar Detector, and Dash Camera, add in the cost to replace the broken window, and it's a no brainier to figure out I need a camera DVR.

First off the instructions to place the DVR on the Internet are nonexistent, however, a duckduckgo.com search will return more then enought help for you. The short answer is you have to open port (37777) on your firewall to allow the DVR to be seen via your cellphone or remote PC. The DVR presets allow for recording out of the box, and its internet settings are set to DHCP by default, so networking is pretty simple, its dealing with your Cable Modem or DSL modem that's hard; more on that later.

The camera's have a nice clean, clear picture, and during low light automatically turn on the IR LEDs and the camera switches to Black and White mode; there isn't anyway to see other then B/W using IR illumination, that's just the way the world is. If you try and use a camera at night pointing outside through a window, the IR LEDs will cause the window to act like a mirror and you won't see anything.

The cables that come with the unit are 18.3 meters or 60 feet for the rest of us in the free world. They sell additional cables at a very inexpensive price, so there's no need to make your own. The ends on the cables prevent you from plugging into the cameras wrong, so even with the addition of extra cables it's a simple installation; you will have to buy some female to female BNC barrels to use with the extensions.

There's a selection under "Networking" that is labeled "WiFi", however, it only works with a WiFi USB adapter sold buy some other vendor. There's 2 USB ports on the back of the DVR, the top port is marked "USB 2.0", I assume for a thumb drive for backing up recorded data, and the bottom is is labeled "USB Mouse", which was included; the optical mouse worked in both ports, so I'm thinking the DVR doesn't support a Keyboard. There is very little need for a keyboard since all the information to be entered is easily accomplished via a mouse and the only time I wanted a keyboard was to enter in the password.

There's a setting for allowing the DVR to obtain time off the internet using NTP, however, I still had to manually set the time the very first time, there's support for DST, however, you have to tell the DVR which days to start and stop DST.

Power for the DVR comes from a small wall wart, however, there are terminal connections to allow for the use of 2 wires to supply power, the cameras are supplied from a separate power supply, one power supply can support 8 cameras, and an octopus cable is supplied for this.

I used the HDMI connection to connect to my TV for use as a display, there's also a VGA port that could be used, however, at the cost of HDMI TV's it's probably the connection most users will use. The display allows you to see up to 9 cameras at once realtime, and double clicking on any one picture will expand it to full screen. I only own a 740p TV, however the cameras output 1080p to it without any problem.

Getting on to the internet : after reading the online documentation for getting the DVR to be seen from a device on the internet I found that I had to add a Port Forwarding rule to allow port 37777 to the DVR. This will require you to hard code an IP address into the DVR, which is very easy, its figuring out how to add the Port Forwarding to your DSL/Cable modem that may give you problems. If your modem supports adding a DMZ, you could also add the DVR to the DMZ and not bother with Port Forwarding. Each modem is different so once again duckduckgo.com may be need to find help on this. You'll need to remember to turn WiFi off on your cellphone when trying to test the remote viewing application, since when your cellphone is on the same network as the DVR the firewall rules don't apply.

The Android ZOSI viewing application isn't as easy to navigate as I'd expect, I don't own an iPhone so I can't speak to that application. One thing I DID NOT like about the ZOSI's Android application, is it requires you to give it an unreasonable amount of access to your phone's resources; why do they need access to your camera, contacts, and a host of other items? ZOSI, fix this, or at least explain why you need all of this access. The remote display is downgraded to prevent over use of your network data plan on your cell phone, I've played with it a bit, however, I can't say if this is a setting that can be changed. I did figure out that you can remotely capture video from a camera onto your cell phone, and also play back video as well.

As I learn more about the system I may post more.

I've yet to try and add a WiFi camera to the system, as I still have to install all 8 cameras, but I'll try that next and post the results.
Read more
66 people found this helpful
Helpful
Report abuse

Unavailable
5.0 out of 5 stars Don’t hesitate to purchase!!!!
Reviewed in the United States on March 7, 2020
Style: 8CH+8Cameras+2TBVerified Purchase
Let me start with saying I went with the 8channel 2T package, and not only is this better than Swann, Blink XT2 and Ring.... But it’s a fraction of the price!! (I’ve never tried any other companies besides those 3) but I was just like you if your reading this comment right now, and it didn’t seem there was enough information in the description or you weren’t sure if this is worth the money because it’s reasonably priced. I personally took 5 minutes of my time to type this specifically for you to know if your in the market for home security or security for you shop or business, then look no further because this is your best bang for you buck. Plug and play system that isn’t complicated, full accessibility to each cameras settings such as color, tint, zoom. When you hook the system up it will automatically be in motion detection mode, so anytime there is movement on any camera the system will save that file to your DVR, or You can change it to record 24hrs-7days a week and depending on what size hard drive you get let’s say that it only holds 1 month of recordings so 30days (each day 24hrs) on the 31st day the dvr will automatically rewrite over day 1 (or the oldest day etc) you can schedule recordings, save recordings and IF YOU HAVE INTERNET at you home you can download the app and be able to see your cameras on your phone, pc, or tablet. Hopefully this helped you decide
Read more