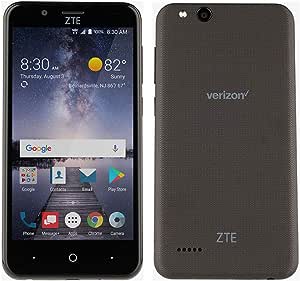 ZTE VZW-Z839PP Blade Vantage 5 16GB 1.1GHz 2GB Prepaid LTE Verizon Smartphone, Black . Carrier locked to Verizon Prepaid. Will not work on postpaid Verizon accounts that use contracts. Contact seller before purchase if you are unsure what type of Verizon acocunt you have

4.0 out of 5 stars
4 out of 5
806 global ratings
How are ratings calculated?
To calculate the overall star rating and percentage breakdown by star, we don’t use a simple average. Instead, our system considers things like how recent a review is and if the reviewer bought the item on Amazon. It also analyzes reviews to verify trustworthiness.

Kayla
5.0 out of 5 stars Cheap, but great!
Reviewed in the United States on July 2, 2019
Size: 16GBVerified Purchase
When my ZTE Grand X Max + finally crapped out, I hunted for a phone. It took me over a month to finally settle on 2 different ones. It was either ZTE Blade Vantage or Moto e5 Play. I tested out both phones and I found that I love the Blade Vantage much more than the Moto. I ended up sticking with the ZTE. When I got the product it was in the original package, unopened so that was a major plus, as I was not sure that it would be new or not.

Once I got the package open, it contained the charger, a charging cord, the phone, battery, sim card, and all the booklets. When I turned the phone on for the first time, the battery was at 85%, which was amazing and since my purchase I have put this phone to use. I did get a SD card for it and I was unsure if it would work with a post-pay plan, but according to Verizon, it will work with prepaid or post-paid plans. Which is another plus.

I have dropped this phone a few times already and still no issues. The camera works for everything that I need it for, which are basically a bunch of gym selfies and pictures of my food and the occasional video chat with my family. The battery holds a great charge and I have tons of apps installed and it is not slow, and it works really quickly.

The only issue that I had was the series of system updates that took about 2 hours to complete but other than that, no complaints what-so-ever. The screen is large enough for Netflix and gaming. The colors are great. Plus according to the paper work with the phone it has a warranty on it.

I also received this phone so much quicker than I expected. I ordered on June 15 and had it in my mail on June 17. If I ever need to get another phone, I am going with another one of these and for the price, it is totally worth it!
Read more
37 people found this helpful
Helpful
Report abuse

Joneill
4.0 out of 5 stars Good phone for the price!
Reviewed in the United States on March 20, 2018
Size: 16GBVerified Purchase
For the price you can't beat this little phone. If you are looking for a back up phone, or don't care too much about having the latest and greatest this is a solid phone. It seems to do most things well, but not anything great.

Pros
Calls sound great on it.
Works well enough to navigate without too many issues
Has enough power to run some basic apps and games

Always hot
1.0 out of 5 stars As long as all of you have a phone I don't need one and the hassle it brings.
Reviewed in the United States on May 7, 2019
Size: 16GBVerified Purchase
I'm not sure about this phone. Received it yesterday and cannot activate it. When I tried to enter the last 4 digits of my newly chosen phone number it would not accept them. The button didn't work. The system says the sim card that came with the phone is invalid. I don't have a car so I could go to the Verizon store or Walmart for help. I don't have another phone to use. I cannot reach Verizon online except via chat bot and those are useless. I wonder if this is a refurbished phone.
Read more
21 people found this helpful
Helpful
Report abuse

MJW
4.0 out of 5 stars Can't be beat for the price
Reviewed in the United States on December 11, 2018
Size: 16GBVerified Purchase
If you're like me you don't need some super expensive smartphone. These cheap Android phones do everything I need and this one is more of the same. A few warnings: the camera is terrible. Unless you have perfect outdoor lighting, the pictures always come out blurry, grainy, and highly compressed. If a decent camera is one thing you need then keep looking. Also, Google Maps is terribly slow and delayed. Use Waze for GPS instead. Sometimes the phone does feel a bit sluggish but for the most part it's snappy enough, I mean what more can you really ask for at $50. Otherwise this is a solid smartphone and probably the best value for the money you're going to get.
Read more
20 people found this helpful
Helpful
Report abuse

Star
5.0 out of 5 stars Perfect for my kids.
Reviewed in the United States on August 14, 2018
Size: 16GBVerified Purchase
I bought these phones for my tweens and my toddler. They love them! The camera isn't great but they use these phones to play Minecraft and Roblox with no issues. The battery is in the phone packaging and must be inserted before charging (I learned this the hard way).
Read more
22 people found this helpful
Helpful
Report abuse

Nicole
1.0 out of 5 stars Very Poor Materials
Reviewed in the United States on March 17, 2019
Size: 16GBVerified Purchase
If this is your first cell phone ever, a phone for your child, or you need a plastic toy phone, then this could work. Keep in mind that the plastic back, which you’ll have to remove to place the battery and SIM card in at least once, won’t fully reattach after. You will have to get a good enough case to close the gap exposing the phones hardware and to keep it in tact. From shopping around, there are much more solid phones than this one within the same price range. For me, this was a complete waste of $40 that is non refundable.
Read more
13 people found this helpful
Helpful
Report abuse

Brenda colston
1.0 out of 5 stars Junk
Reviewed in the United States on March 26, 2019
Size: 16GBVerified Purchase
I received this phone yesterday. Plugged it in and it said it was 88 percent charge but I left it to get to 100. After about 30 minutes I tried to turn it on and it said it needed to charge so ok I left it and about 15 minutes later I saw the screen come on but it went back of this continued for a long while I fell asleep and woke up to check the phone that had been plugged in now for 7 hours. It wouldn’t come on. I think I was sent a defective phone, with no instructions on how to return it.
Read more
11 people found this helpful
Helpful
Report abuse

* Phone screen is very low quality with a high degree of parallax.
* Call quality is high
* Internet functionality is great
* Plastic case is soft won't hold up to abuse
* Camera quality is low but as stated