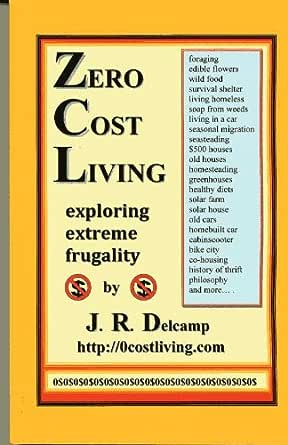 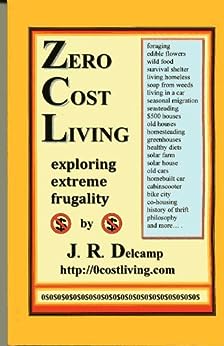 Cmdr Riker
3.0 out of 5 stars Zero cost of living
Reviewed in the United States on August 12, 2015
Verified Purchase
The book covers the topic of zero cost of living, but with some not great examples and somewhat dated financial information. The first few chapters are somewhat redundant in stating an idea or topic. Sometimes three or four paragraphs in a row will say the same thing slightly different, like it was written down to decide which to use but then not edited. Also the author keeps mentioning topics after topic, but then saying they will be covered later in the book. By the time you get through it, you are not sure if they were really covered or not.

Once past the first few chapters, there are some examples of zero cost of living. Some are doable but not desirable, like living homeless in the bushes in a city, dumpster diving, etc. later when explaining how the zero cost of living (zcl) methods could be used on a piece of land, the costs appear to be low. While it is possible to find inexpensive property, it may be really challenging to find something at those levels. Also when talking about the costs, the author refers to things like the income from savings will produce x dollars per year. However, at today's interest rates, you won't find 5% returns on your savings. That makes the methods mentioned that much more difficult to put into practice.

The last few chapters are better written and explain a bit more the philosophy of ZCL. The main idea is to have a piece of land and become self sufficient to the maximum extent possible. Invest in tools and such that will help you produce the food and things you need for ZCL.

Overall the book needs editing and more updated examples. While not an actual blueprint, it does provide a methodology for ZCL that people can tweak and maybe meet their needs. While not perfect, it does provide for an interesting read.
Read more
2 people found this helpful
Helpful
Comment Report abuse

O. McIntyre
4.0 out of 5 stars Not a great book but a good one
Reviewed in the United States on March 6, 2012
Verified Purchase
It took me several weeks to decide to upgrade from the "sample" to the full book, but I'm glad I did.

For the most part, the author provides a compendium of information that he has gleaned from other sources. He fully admits that his first-hand experience of "zero cost living" consists of a couple of youthful summers.

What if? What if we approached life as if we were living in our car, or a sailboat, or a wilderness homestead? What would we do? What would we do without? ZCL encourages readers to imagine different, more joyful, less conventional, less consumption-driven life. If you need encouragement to do this, then I highly recommend this book.
Read more
10 people found this helpful
Helpful
Comment Report abuse

Angel R.
5.0 out of 5 stars Great informative and practical book!
Reviewed in the United States on October 8, 2012
Verified Purchase
I have bought and read many books about frugality and they all give tips on how to save money here and there, but Zero Cost Living is very different from all the others in the sense that it also gives reasons about why the current global economy is collapsing and it also teaches how to fight inflation through frugality. At the same time it shows you how to build your own house, how to produce your own food, etc. It gives you thousands of great ideas on how to live very comfortably with very little or no money at all. This book is good for the homeless, the very poor, the unemployed, the low income person, the average income person. I highly recommended it. Best book I have ever read. Angel R.
Read more
8 people found this helpful
Helpful
Comment Report abuse

Tbacon
5.0 out of 5 stars Looking to save a LOT of money?
Reviewed in the United States on February 6, 2013
Verified Purchase
Even if you don't do everything in the book (I haven't yet), it is extremely informative. Anything and everything you might want to know about saving money, or living completely off grid it is here. The author even lists places you can get more information than is even in his book.
Read more
4 people found this helpful
Helpful
Comment Report abuse

Natalie A Normyle
3.0 out of 5 stars Decent but Dropped the Ball in Several Areas
Reviewed in the United States on March 7, 2014
Verified Purchase
I was excited to start this book, but had a hard time finishing it. Some decent information not found elsewhere,
however, it was all over the place, disorganized, often asking questions that the author then did not answer, being
too vague in some important areas like homesteading, and too detailed in others.
Read more
One person found this helpful
Helpful
Comment Report abuse

Kay R.
5.0 out of 5 stars A Civil Preparedness Book - extremely so
Reviewed in the United States on January 11, 2014
Verified Purchase
I ordered it as an E-book, but I need a hard copy. It is really long. Too much for the computer.

giocasa
3.0 out of 5 stars lots of useful information here
Reviewed in the United States on January 13, 2010
I downloaded this book in kindle form to my pc, first time for everything, and it worked. I would recommend that if you can to do so also, as the kindle version is much cheaper. Reading through the whole book took some time , there is a lot of information here. Being a big daily reader, and extremely poor myself, I knew a lot of what's here already. Most readers, I hope will find it very useful in helping them to get along a little better when broke themselves. I was not crazy about all the green living parts , but overall the author does the job well in presenting a lot of material that can ,and I hope will help get them a long a little better financially.
Read more
13 people found this helpful
Helpful
Comment Report abuse
See all reviews

Kindle Customer
5.0 out of 5 stars This book is full of information!
Reviewed in Canada on April 24, 2013
Verified Purchase
Worthwhile reading as it is a list of what is necessary to live without a home, job or savings. Also a good reminder of how to proverty proof your family, at least in the short term. Excellent!
Read more
2 people found this helpful
Report abuse
See all reviews