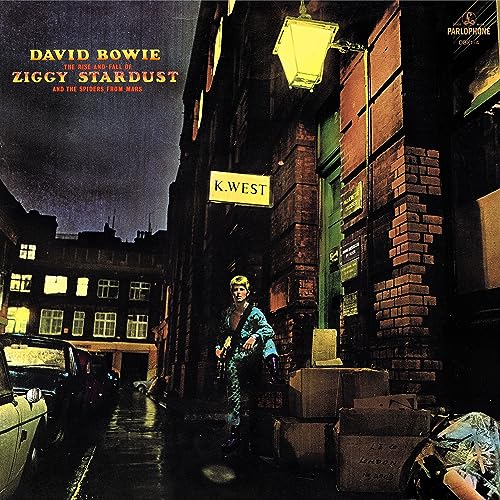 4.8 out of 5 stars
4.8 out of 5
202 global ratings
How are ratings calculated?
To calculate the overall star rating and percentage breakdown by star, we don’t use a simple average. Instead, our system considers things like how recent a review is and if the reviewer bought the item on Amazon. It also analyzes reviews to verify trustworthiness.

Joe Eastlack
5.0 out of 5 stars If You Love Bowie's Music, You Will Love These Two - Two Disc Sets
Reviewed in the United States on June 23, 2017
Verified Purchase
I have always loved this particular disc, whether on vinyl or cd, extra tracks or no extra tracks. The remastering on this disc is superb and Mick Ronson's guitar really rings out with a crystal clarity that can't be beat! There's no need to go through a track by track as far as the original album is concerned other than it has great remastering. But the extra tracks are wow! The Arnold Corns versions of "Moonage Daydream" and the even greater version of Arnold Corns "Hang On To Yourself" are really fantastic and if I might add are totally different from the originals. While "Moonage Dream" sounds a bit more funky, "Hang On To Yourself" is a more danceable acoustic version. When I first heard "Hang On To Yourself" I was floored I loved it so much. Also, "The Supermen" has an alternative beginning, a little more acoustic as compared to the original version on the album "The Man Who Sold the World". I suggest, if you can, get yourself a copy this 30th Anniversary Edition and also, the 30th anniversary edition of "Aladdin Sane".. If you love Bowie's music, you will love these two - two disc sets. Also, if you are able to acquire the other anniversary sets, Aladdin Sane and Space Oddity are also excellent. TheAladdin Sane that I have is just like the Ziggy Stardust cover - hardbound while the Space Oddity cover is a digipak cover that opens to reveal an angle cut puch with song list sheet and booklet. It also happens to be British whereas the other hardbound covers are domestic.
Read more
2 people found this helpful
Helpful
Report abuse

DT
5.0 out of 5 stars Really quite out of sight
Reviewed in the United States on September 17, 2020
Verified Purchase
You only see 5 paltry stars here....listen and you’ll see a lot more:) I can’t explain in words how beyond good this album is. I don’t have other pressings (yet) to compare it to And I’m not an audiophile with perfectly tunes ears, but it sounds Great. The acoustic tracks at the end are extra special. You owe it to yourself.
Read more
One person found this helpful
Helpful
Report abuse

Kevin Dragone
5.0 out of 5 stars Oldie but a Goodie
Reviewed in the United States on January 11, 2019
Verified Purchase
Bowie is one, if not, my fiance's favorite performer. Guy was a legent. And while looking for records to buy her for Christmas and our new record player, I knew I had to get this. Was nervous what condition this was going to arrive in and if it would make it on time, but it did. Earlier than expected and it sounds great! Very happy with overall experience.
Read more
One person found this helpful
Helpful
Report abuse

Dan Dreifort
5.0 out of 5 stars Got this for the cover art. Hanging in a frame. Excellent.
Reviewed in the United States on July 12, 2016
Verified Purchase
YES! It's a great album, but I'm never listening to this LP. (I have the tunes in other formats.) I got it to put in my album cover frame. The wife was broken up about Bowie's death, so I got this to display in his honor--and to make her happy. It worked. Looks great. Not as fun for me to look at as the cover of The Guitars That Destroyed the World, but I still like it.
Read more
One person found this helpful
Helpful
Report abuse

Apollo
3.0 out of 5 stars B side skipping
Reviewed in the United States on November 28, 2017
Verified Purchase
Great album but this pressing does skip on the songs star, hang on to yourself, and Ziggy stardust. Total bummer unless you're only listening to the A side.
Read more
3 people found this helpful
Helpful
Report abuse

L. Singletary
5.0 out of 5 stars One of the best!
Reviewed in the United States on July 31, 2020
Verified Purchase
Ziggy Stardust is one of the best albums of all time! Excellent delivery and condition.
Read more
Helpful
Report abuse
See all reviews

Nigel Carroll
1.0 out of 5 stars Ziggy Reversed???
Reviewed in the United Kingdom on October 10, 2017
Verified Purchase
The sound insn't great on the 30th anniversary remaster, but worst of all THE CHANNELS ARE REVERSED!?!?!?!?!? Who's idea- no, ERROR was this?
Read more
3 people found this helpful
Report abuse

Don Warrington
5.0 out of 5 stars The best just got better, Vintage vinyl
Reviewed in the United Kingdom on July 13, 2015
Verified Purchase
"To be played at maximum volume"
Says it all
Read more
Report abuse