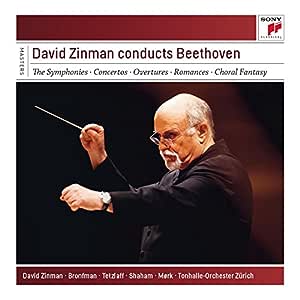 Drawn from the worldwide holdings of Sony Classical Music and re-mastered in 24bit High Resolution Audio, these smart, desirable and collectible EU (Germany) pressed import multi-disc editions, replete with legendary artists, offer many of the finest, most sought-after recordings in the classical discography. The slender, shelf-friendly box frontages feature large, prominently displayed photos of the edition's featured artist, work listings at the back, with the CDs themselves housed in protective sleeves that divulge the recording specifics for each performance.

3.7 out of 5 stars
3.7 out of 5
14 customer ratings
How does Amazon calculate star ratings?
Amazon calculates a product’s star ratings based on a machine learned model instead of a raw data average. The model takes into account factors including the age of a rating, whether the ratings are from verified purchasers, and factors that establish reviewer trustworthiness.
Top Reviews

David RoweTop Contributor: Classical Music
4.0 out of 5 stars Not remastered, despite the '24bit' claim on the box
Reviewed in the United States on December 31, 2015
Verified Purchase
I'll offer a word regarding the purported remastering of these recordings. I bought this box hoping that SONY could improve the sound heard on the original Arte Nova releases. I appreciated Zinman's approach to the symphonies when they were first issued, but found the recording quality less than ideal. They suffer mostly from a sense of congestion and boxiness in an ill-defined acoustic.

Alas, these discs in SONY's reissued box are identical to those originals. Not only do they sound absolutely identical to the originals, my universal disc player "recognized" and remembered the discs when jumping back and forth from the originals to these SONY discs. It resumed play from where I had stopped on the corresponding disc, confirming they are identical. So, the only thing SONY did was compile them into a box and change the cover art.

Still, it is convenient to have all of Zinman's Beethoven in one, tidy box. I was able to replace 12 CDs with this box, freeing up some much needed shelf space! Once again I was pleased to still hear these as being excellent performances of the Symphonies. The Overtures are not nearly as good. The Piano Concertos are so-so. And, incidentally, the Septet, which was originally coupled with the Triple Concerto on the Arte Nova release, has been excluded in this box (it wasn't "conducted" by Zinman). This is a pity; it is a glorious performance. And I now have to keep one of those original discs to retain this piece in my collection.

Presumably, there was really nothing that could be done with the original recording quality, so they didn't try. I wish SONY wouldn't advertise their 24bit remastering if they don't actually do it. That being said, I can confirm that the symphonies sound pretty good (actually, better than I remembered them being - but again, absolutely identical to the originals, which I still have, and compared today side-by-side). The Overtures sound absolutely horrible. They were recorded in 2005, several years after the symphonies (late 90s), and I'm at a loss as to why Arte Nova's sound got WORSE as they went along with the project. And they are no better in SONY's box (again, identical) - impossibly confused, congested, ill-focused, edgy and boomy at the same time - just a mess.

All in all, a great Beethoven set, marred by variable (and far from state-of-the-art) sound. Good to have, but not the set I will return to when in the mood for Beethoven. That will be Szell/Cleveland, Chailly/Decca and Vanska/Minnesota (in superlative SACD sound) for the complete symphonies, and Carlos Kleiber for the 5th, every time.

J. Roz
4.0 out of 5 stars A Bargain
Reviewed in the United States on April 30, 2016
Verified Purchase
Hard to beat the price on this set. All the symphonies, overtures, piano concertos, the violin concerto and more. Fine recordings, good performances.
Read more
Helpful
Comment Report abuse

Bernard Michael O'HanlonTop Contributor: Classical Music
2.0 out of 5 stars "A driver doesn't choose the car - it's the car that chooses its driver!"
Reviewed in the United States on December 15, 2014
David Zinman - God bless him - is the Bobby Bolivia of his profession. For those who saw the first Transformers movie (the half-watchable one), BB is the proprietor of Bolivia's Finest Quality Used Cars and Petting Zoo. He is (and I quote) "a car salesman of the tackily dressed, Hawaiian-shirts-'n'-sporty-hat-preferring, always smiling, overly friendly, back-slapping, smooth-talking, horsehockey-spewing variety." Bobby also has a tempestuous relationship with his mother (they communicate via sign-language).

With this exemplar in mind, David "BB" Zinman's sales-pitch is alluring. It does not matter whether it's Beethoven or Brahms or Strauss - offer a "Jump Start" guarantee; ditch metaphysics; lighten the vehicle in question; ship `em out fast; don't individualise anything - it slows things down; assure the prey that a two-stroke engine will get `em from A to B more reliably than a V12. The customer can have it in any tempo so long as it is warp-speed.

Exhibit Number One - Zinman's overhyped, road-runner Beethoven cycle. Look, if you`re in the market for a spruce 1993 Ford Fiesta that zips along nicely and undertakes the milk-run to Walmart with minimal impact on the environment, this does the job. The Millennium Falcon it ain't. No thought is required. Life's complicated enough without being bothered by pesky existential questions - leave `em to those disreputable old Germans in this domain. With this latterday Bob Bolivia and his soloists, you're in safe hands. Don't get lost in their slipstream.

Amazon Customer
5.0 out of 5 stars Masterly stuff!
Reviewed in the United Kingdom on January 5, 2017
Verified Purchase
I have owned the symphonies on the original CDs since their first release, and am delighted to have all the concertos & overtures as well. These are dynamic performances, well recorded, from a still under-acknowledged master. The boxed presentation will keep everything in pristine condition - and save a great deal of shelf space, too, compared to single discs - and the set represents astonishing value. Perhaps the absence of any booklet with analytical notes might bother some, but this repertoire is so well documented, in books or online, as to render this unimportant.
Read more
2 people found this helpful
Helpful
Sending feedback...
Thank you for your feedback.
Sorry, we failed to record your vote. Please try again
Report abuse