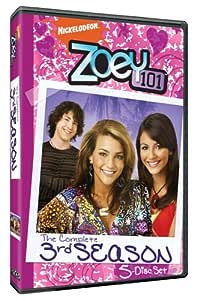 Surf's up! The entire Season 3 of the hit Nickelodeon teen series, Zoey 101 is making a big splash! Soak up the rays, ride the crazy waves, and get ready to sit back, relax, and enjoy the sunshine days at PCA with all 24 episodes in this 4-disc set! Features teen superstars Jamie Lynn Spears, and Victoria Justice, star of Nickelodeon's original movie, "Spectacular!" So grab your sunscreen and your Season 3 set and avoid getting totally left in the cold!

This disc is expected to play back in DVD Video "play only" devices, and may not play in other DVD devices, including recorders and PC drives.

4.8 out of 5 stars
4.8 out of 5
321 global ratings
How are ratings calculated?
To calculate the overall star rating and percentage breakdown by star, we don’t use a simple average. Instead, our system considers things like how recent a review is and if the reviewer bought the item on Amazon. It also analyzes reviews to verify trustworthiness.

crazymusic
5.0 out of 5 stars Great Nick Show!
Reviewed in the United States on December 31, 2015
Verified Purchase
Bought this from an Amazon seller. Got the Canadian version which Zoey in the front while Lola and Chase are behind her and has a light blue/teal background. This is the official retail release in Canada with pressed discs (don't worry it plays on US DVD player). The product image might have French writing but actually it's all in English. You have the option to flip it to French if you want too. It includes all episodes from the 3rd season on 4-discs.

The difference between the Canadian and U.S. release:

Canadian version discs are pressed just like every other DVD you buy in store while the U.S release is DVD-R where Amazon burns the episodes into discs (which anyone can do this if they record the show).
Also according to reviews the episode, "PCA Confidential" is missing on the U.S. release while the Canadian release this episode is included because it's part of season 3. For some reason Nickelodeon aired this episode when season 4 was airing not surprise since Nick likes airing their TV shows out-of-order.

Andrea
5.0 out of 5 stars Comes in Two Volumes
Reviewed in the United States on August 14, 2013
Verified Purchase
The third season comes in 2 volumes:

Chase's Girlfriend- Rebecca tells Zoey to stay away from Chase

Hot Dean- Zoey and her friends set their dorm adviser, Coco, up on a date with the new dean

Zoey's Tutor- Zoey secretly has Logan tutor her in chemistry

Michael Loves Lisa- Michael has a crush on classmate Lisa, who already has a boyfriend

Wrestling- Zoey is forced to join the school's wrestling team

The Radio- Zoey and Chase argue over an old, very valuable radio that was given to Chase by his grandfather

Paige At PCA- A new science whiz, Paige (played by Miranda Cosgrove), comes to PCA and bests Quinn at science

The Favor Chain- Zoey wants to meet her favorite author at the bookstore, but must complete a series of tasks in order to get Coco to drive her

Son of A Dean- Zoey begins dating the dean's son

Logan Gets Cut Off- After Logan's father cuts off his financial resources, he must learn how to fend for himself

Goodbye Zoey? (Double length episode)- Zoey's parents are moving to England and Zoey must decide if she wants to transfer to another boarding school

Some reviews have said the Season 4 finale PCA Confidential is on this disc, but on my version it's not. That may only be on the Canadian version of the disc. It will also only play in Region 1 DVD players. I own a Sony and it plays just fine, everything came in the right boxes and all the discs are in brand new condition. Got the full set for $18 which is a really good price for 2 volumes of 25 episodes. And in my opinion Season 3 is one of the strongest seasons of Zoey, lots of great episodes and you're getting more bang for your buck. Only problem I have is no special features and no PCA Confidential episode.
Read more
2 people found this helpful
Helpful
Report abuse

Ione
1.0 out of 5 stars I didn't order it
Reviewed in the United States on July 26, 2019
Verified Purchase
I didnt order it
I dont know what it is
Read more
4 people found this helpful
Helpful
Report abuse

Patricia Yochim
3.0 out of 5 stars AMAZON SLIME NICKELODEON !
Reviewed in the United States on January 25, 2015
Verified Purchase
The set is great. But lets be honest: "WHERE THE FLIP IS THE REAL SET FROM NICKELODEON". Is Nickelodeon stupid or what?! Seriously they are one of the laziest entertainment companies out there. I could run their network better than them. Can't they see they are loosing money or what?! I sure hope this isn't the work of Nick Cannon, because if so, I surely would pay his egotistical a$$ a visit. And YOU WOULD THINK Dan Schneider would want his money from his hit shows! Stupid I guess. You would think children are actually running the iconic network. Iconic in the sense that it gives you the good stuff -like bibble or blue dog soda- then takes it away. Man am I glad Amazon had the intelligence to make bank on Nickelodeons brain dead slime fart negligence.

If someone wants to explain the situation be my guess; but if you're going to try and persuade me it is all the work of the writer strike, save your breath. iCarly through season 1-4 was released and Sam & Cat has yet to be released. The consensus seams to be more of laziness or negligence. Someone tell Nick Cannon get off Maria Carney for two seconds and take a hint. I mean: he is the reason they created Teen Nick and replay all the old shows including the 90's are all that slot. So, Amanda PLEASE tell me and Clarissa EXPLAIN why these morons can't release simple DVD sets and cash in?!

Amazon needs to be commended; though they could of done better work on DVD art and quality they sure got the cover art and set to a T. If Amazon bought a professional DVD maker they would be set to have people throw money at them. Amazon if you work to that point you would see sales sky rocket. Man would I love to see that!
Read more
5 people found this helpful
Helpful
Report abuse

Retired Soldier/Sailor.
4.0 out of 5 stars My NIECE loves it!
Reviewed in the United States on March 11, 2016
Verified Purchase
Well, to be honest, I didn't watch ANY of the four seasons of this show,
but, my 25-year-old [German] niece L=O=V=E=S this series.
She recently requested seasons THREE and FOUR.
Laura loves it! Oh, here's a picture of my lovely niece, and me.
Read more

finnsgirl
5.0 out of 5 stars Zoey 101 must have
Reviewed in the United States on November 1, 2013
Verified Purchase
I love Zoey 101 and season 3 and 4 are my fave seasons and by far the best ones. This season showed the girls friendship with Quinn moving in with Zoey and Lola, it was really evident that Logan, chase, and Michael were friends more so in this season even though they bickered and razzed each other , no one could dispute the friendship between them . All in all and without analyzing every episode this is a must have dvd , awesome episodes and reasonable price. Came fast and am very happy with it .
Read more
3 people found this helpful
Helpful
Report abuse

holly
5.0 out of 5 stars awesome
Reviewed in Canada on November 16, 2014
Verified Purchase
I've been looking for these dvds for awhile now, so excited to finally find them, it's a great show for the family
Read more
Report abuse
See all reviews

Page 1 of 1 Start overPage 1 of 1
Previous page
Next page
Pages with related products. See and discover other items: zoey 101 videos