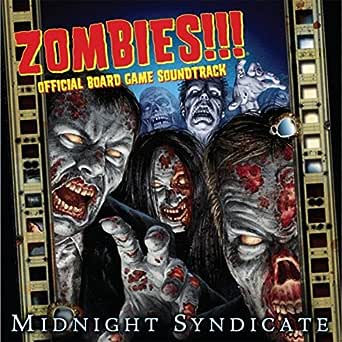 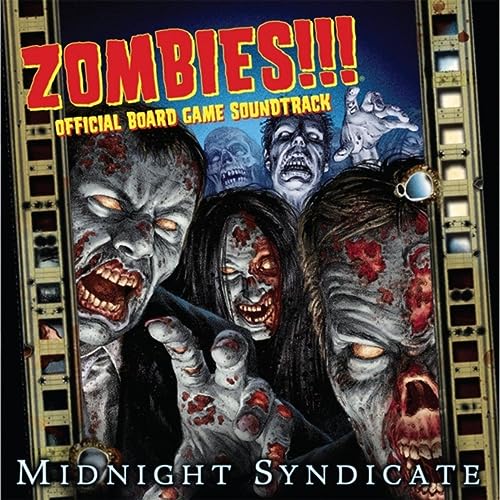 Danny
4.0 out of 5 stars Don't go into the tool shop!
Reviewed in the United States on September 9, 2016
Verified Purchase
Every year around this time I begin searching to see if Midnight Syndicate will be releasing some new material for the Halloween season. Last year's release of "Christmas, A Ghostly Gathering" was quite the surprise for sure. It was great being able to carry over the group's musical vision of a Christmas haunt into December and I've always been a fan of their atmospheric/storytelling music. Discovering the group several years ago in a seasonal Halloween store, their music has become a tradition at my Halloween gatherings ever since. The music certainly gets the imagination going and has often inspired me to watch a classic horror film or read a chilling story. Discovering that they were releasing a new zombie themed soundtrack this year really got me excited. This new release is actually a soundtrack that is meant to accompany a board game but it isn't the first time Midnight Syndicate has done this. Back in 2003 they released music for the roleplaying game "Dungeons and Dragons" as well. Whether you are playing the games or just listening to the music for what it is, I've always found the creativity and artistry of the group to be enjoyable and imaginative.

The opening track sets the pace for the zombie takeover with an almost march like tempo that is both thematic and layered with slight electronic pulses that are reminiscent of horror films from the 80's. The cue ends with the distant sounds of air horns and impending doom for mankind. Great stuff to kick of the zombie apocalypse! "Slight Miscalculation" (track 4) will have you envisioning a massive zombie horde making it's way through a city with it's lumbering and almost clumsy rhythm. Disjointed horns blast infrequently throughout the chaos and it only adds to this vision of terror. Listen closely and you can hear the sounds of the zombies chopping through flesh and growling in the background. One of the most memorable tracks for me personally is "Raiding Todd's Tool Shop" (track 10). It's like listening to an old time radio show where the music and sound becomes the only story you need. No dialogue needed on this one however as all you'll need is the "movie theatre of your mind" to bring you to this moment. It's an amazing piece that has someone seeking shelter in a store, finding a crackling radio that gives a short news broadcast and then....well....I'll let you listen and find out.

"Zombies!!!" contains 9 new tracks from Midnight Syndicate and 9 more that are a mix of previously released material or updated tracks with new sound effects that are a better fit for this particular genre. The updated tracks with new sound effects do provide an interesting twist to familiar pieces however and while they do a great job fitting right in with this "story", long time fans are always going to want new stuff. Previously released material on this soundtrack includes "No Escape" (track 6 - Axe Giant Score), "Veiled Hunter" (track 11 - 13th Hour), "Into the Abyss" (track 12 - Realm of Shadows), and "Dusk" (track 16 - Vampyre).

The updated "based on" tracks have new sound effects, minor musical changes, and are sometimes edited for length. These include tracks 3, 5, 7, 13, and 18. The cue titles have changed but they are based on tracks from "The Rage Soundtrack", "The 13th Hour", "Realm of Shadows", "The Dead Matter Soundtrack", and "Axe Giant Soundtrack".

While I would of preferred all new material, I'm enjoying this collection and the retooled pieces just fine. Those who are just discovering Midnight Syndicate and looking for some great music for their Halloween displays/parties will find this to be quite accommodating. I encourage you to check out their other releases as well. The CD version contains 18 tracks with a total running time of 48 minutes. There is a four page insert that has production credits, a special thanks section, an advertisement for the board game, and track listings.

Allen C. Huffman
VINE VOICE
4.0 out of 5 stars Good ambient tracks for Halloween. Artist grants cost-free license to use.
Reviewed in the United States on March 10, 2019
Verified Purchase
There were several tracks on the disc that were very useful for a Halloween attraction. I go with them because you can register on their website and get a cost-free license to use this music in your haunted house.
Read more
Helpful
Comment Report abuse

LordBlackwater
5.0 out of 5 stars Five Stars
Reviewed in the United States on March 2, 2018
Verified Purchase
Sounds awesome great for when we play the game
Read more
Helpful
Comment Report abuse

kenney browning
3.0 out of 5 stars Three Stars
Reviewed in the United States on October 6, 2016
Verified Purchase
great cd hoping for all new content but at least 3 or four songs repeated from other albums
Read more
2 people found this helpful
Helpful
Comment Report abuse

TammyJo Eckhart
VINE VOICE
3.0 out of 5 stars Not What I was Hoping for with Zombies
Reviewed in the United States on December 18, 2016
Let me first confess that I have not played the Zombies game before but because I've enjoyed much of the music from Midnight Syndicate in the past and I like a lot of other zombie board and card games, video games, tv shows, and some movies, I thought this might be good to check out. Given the titles of the songs I was expecting a build up that was creepy, sometimes scary, and then uplifting and I just didn't get that to the degree I wanted.

I didn't find that any of the songs were as creepy as the titles suggested they should be. Shouldn't "No Escape" really be scary and end on a sad note? I also didn't find that there was a strong build up between songs, no musical climax to keep me listening. I made myself listen through the album three times and no, I just never got that scared feeling I want from anything zombie.

5 of the 18 songs are from other soundtracks or based on a song from another sound track. Given that the album title is "Zombies!!! Official Board Game Soundtrack" this really surprised me. I think that might be part of the problem with the flow of the tracks, they need to be focused on the zombie atmosphere not on other horror genres and situations. Zombies are a depressing and intense genre because they are overwhelming and the ally who fights next to you may try to eat you minutes later. I never got those feelings from this album.

I'm curious to read what players of the board game think about the album and if it goes well with playing the game at all.
Read more
2 people found this helpful
Helpful
Comment Report abuse
See all reviews