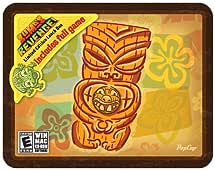 Reload the highly successful Zuma franchise, with an all new ribbeting limited edition sequel to the ball-blasting classic!

Zuma's Revenge Limited Edition is an arcade style single player Match-three casual game for PC and Mac in which players utilize the game series' iconic spinning frog idol to eliminate oncoming balls before they in turn are knocked out of the game by them. The game is a sequel to the originalZuma which has sold millions of copies worldwide and contains the series' trademark accessible, yet addictively frenetic gameplay. Additional features include: the collectible Zuma's Revenge Limited Edition tiki lunchbox, more than 60 levels, four game modes, new power-ups, new gameplay mechanics and compatibility with PC and Mac operating systems.

The Ultimate Version of the Ribbeting, Ball-Blasting Sequel

Zuma's Revenge introduces you to an all-new world of Zuma where evil tiki bosses rule the land. Conquer over 60 levels by firing stone spheres to make matches and destroy the deadly stream of balls, then take on six tiki boss battles and guide your agile amphibian to victory. Leap into action in four game modes with explosive new features and amazing new gameplay: Slide and hop for smarter shots, hit targets for exotic bonuses and detonate new power-up balls. Will you succumb to the perilous pitfalls, or can you tame the jungle in this PopCap ball-blasting challenge.

More than just a game, the Zuma's Revenge Limited Edition release also contains the limited edition lunchbox. Suitable for collecting, the lunchbox bears a kitschy tiki against a Polynesian background, as well as the PopCap logo that together immortalize the boss battles experienced in the game.

4.5 out of 5 stars
4.5 out of 5
64 customer ratings
How does Amazon calculate star ratings?
Amazon calculates a product’s star ratings based on a machine learned model instead of a raw data average. The model takes into account factors including the age of a rating, whether the ratings are from verified purchasers, and factors that establish reviewer trustworthiness.
Top Reviews

David
4.0 out of 5 stars Doesn't Play Fair
Reviewed in the United States on April 7, 2016
Verified Purchase
Zuma is a wildly addictive game, however if you play it for any length of time you do start to see patterns in how the game is programed. For instance you will sometimes get colored balls when there are no balls of that color in play. Also when you're attempting to do a gap shot the ball string will suddenly jump back to connect matched color balls, however this only happens when you shoot a ball for a gap shot. If you don't shoot the string begins slowly and builds speed until the matched color balls connect. This prevents you from gaining the fruit bonus or extra points from a gap shot. I've seen this in all of the Zuma games so I think this is a deliberate feature in the programming.

It's still fun and a great time waster, but after these things start happening it gets aggravating.

CryBabyArtist
4.0 out of 5 stars nice box!
Reviewed in the United States on February 4, 2016
Verified Purchase
nice box!! I got to add to my collection!! I have Bonanza, Curious George, Jungle Book, Harvey Toons and now Zuma. The game installed perfectly.. I only installed on my Windows so far.. I'm getting a new iMac tomorrow..so maybe I'll add something but I din't expect a problem.. these games from PopCap are just great.. this is a game you can play over and over and over and over again and it's not boring.. this is the perfect kind of game to play when you're all caught up and nothing to do and nothings on.. Zuma is HARD after like level 39 he he grrr I had 7 lives too!!
Read more
One person found this helpful
Helpful
Comment Report abuse

Larry G.
5.0 out of 5 stars Great Game...
Reviewed in the United States on August 12, 2019
Verified Purchase
I've played the original Zuma for years, but Zuma Revenge is more challenging, and exciting to play. I love the different options in playing this game, although my score for the original was over 15 million, I'm working my way up to beat all Ace scores.
Read more
Helpful
Comment Report abuse

idommah
5.0 out of 5 stars Great game for the price.
Reviewed in the United States on February 24, 2014
Verified Purchase
This game does not have any extra content over the regular edition. it just has a lunchbox. anyways. I found that this one is cheaper. so i got it. great for the price. I don't need to say anything about the game. it is just really good.

ONE TIP.
if your running this and getting an error. (also have a dedicated gpu) I use a laptop with a nvidia card. this game won't run on this. you have to set your default GPU as the intel gpu. or you just click the right mouse button and use the intel GPU while running it.

Welsh Dragonfly
5.0 out of 5 stars More Zuma and with a Lunchbox
Reviewed in the United States on May 2, 2013
Verified Purchase
Zuma is a bubble-pop-like game where a long line of balls wind their way around a track from start to finish. Your goal is to shoot your ball to make chains of 3 or more, and to eliminate the line before it reaches the end of the track. There are power-up balls which gives you special powers, like shooting 3 balls at the same time, or eliminating all balls of one color. A fun new addition to the classic Zuma are boss battles. There are 60 levels, 6 bosses to conquer, and a few mini-games. And the limited addition came with a free metal lunchbox! I love this game.
Read more
Helpful
Comment Report abuse

Furman O. Ashley
4.0 out of 5 stars Revenge This!
Reviewed in the United States on February 16, 2014
Verified Purchase
Another "match three" style game that is highly addictive and great fun. I love that you get the regular game as well as bonus challenge games to choose from almost at the very start. It's also nice that the game changes up the format so that you're not playing the exact same style all through the game. I recommend this product.
Read more
2 people found this helpful
Helpful
Comment Report abuse

Gail
4.0 out of 5 stars Love the game
Reviewed in the United States on March 7, 2016
Verified Purchase
Love the game, no directions to download on your computer. Everybody just assumes you don't need directions, everyone knows how to install a game on the computer, unfortunately I don't !!!! I was very disappointed couldn't get installed. When I got my other game, also from popcap it came with instructions so I was able to install it. It stated it was new, I had a feeling it wasn't. disc was in an opened envelope, lunch box could of been shrink wrapped again thats more an issue of who I bought it from.
Read more
Helpful
Comment Report abuse

cynthia goodman
5.0 out of 5 stars Zuma Revenge Game
Reviewed in the United States on March 22, 2014
Verified Purchase
This is my favorite game !!! I have a 27" Apple Mac Computer & this game is dynamic on the screen as it fills the whole screen up. It is the newest version & to my surprise has Iron Frog on it also. I have enjoyed this game immensely !!!
Read more
3 people found this helpful
Helpful
Comment Report abuse
See all reviews from the United States

Amazon Customer
5.0 out of 5 stars Five Stars
Reviewed in Canada on August 30, 2017
Verified Purchase
awesome price and I love the game that's why I purchased it
Read more
Helpful
Sending feedback...
Thank you for your feedback.
Sorry, we failed to record your vote. Please try again
Report abuse

Bogus Tripper
5.0 out of 5 stars A Large size lunchbox.
Reviewed in Canada on December 16, 2016
Verified Purchase
Love the game-The lunchbox arrived with quite a few dents though. I blame the Post Office.
Read more
Helpful
Sending feedback...
Thank you for your feedback.
Sorry, we failed to record your vote. Please try again
Report abuse

Donna F.
5.0 out of 5 stars Zuma
Reviewed in Canada on March 7, 2019
Verified Purchase
I love this game
Read more
Helpful
Sending feedback...
Thank you for your feedback.
Sorry, we failed to record your vote. Please try again
Report abuse