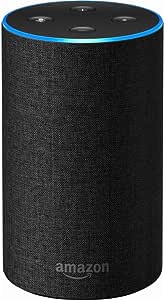 See what Alexa can do

Visit the Amazon Store
4.6 out of 5 stars 82,878 ratings
| 1000+ answered questions
Currently unavailable.
We don't know when or if this item will be back in stock.
Jump to:

Alexa has tens of thousands of skills and counting. Skills are like apps and help you do more such as playing Jeopardy!, meditating with Headspace, and falling asleep to rain sounds. Create your own personal skills and custom responses with Alexa Skill Blueprints. Just say “Alexa, help me get started with skills.”

New skills are being added all the time. Discover them in the skills section of the Alexa app or visit the skills store.

4.6 out of 5 stars
4.6 out of 5
82,878 global ratings
How are ratings calculated?
To calculate the overall star rating and percentage breakdown by star, we don’t use a simple average. Instead, our system considers things like how recent a review is and if the reviewer bought the item on Amazon. It also analyzes reviews to verify trustworthiness.

Sherry the Dog Lady
5.0 out of 5 stars AMAZING SOUND!!
Reviewed in the United States on July 20, 2018
Color: Charcoal FabricConfiguration: EchoVerified Purchase
I got some smart plugs so that I could turn on inside lights if we come home after dark with the app on my phone.
My 82 y.o. Dad lives with me & has a hard time walking & he's also losing his ability to see at all in the dark, because of Macular Degeneration. So the last thing I need is him tripping over something in the dark, trying to turn lights on!!
I have an Echo & Dot in my room, which I mostly use to stream music with my Amazon Music Unlimited.
I was controlling even his bedroom light & the hallway light with the app on my phone as well as my Echo.
So I bought two more Dots during prime day sale.
It's been a game changer!! My Dad struggled, even with the app on his phone to control the lights. Now that we have a Dot in his bedroom & an Echo & Dot in the living room, he's very easily learned how to ask Alexa to turn on the hallway light, his bedroom light when he's going to bed!! NO MORE STUMBLING AROUND IN THE DARK or trying to remember where he put his flashlight!!
Since the Echo Dots all sync together, once he gets to his bedroom, he tells Alexa to turn off the living room light & the hallway light when he gets to his bedroom!! This little device is a SAVING GRACE, not only for my Dad, but for me!! I don't have him calling me to "Show me again how to turn the lights on/off" with his phone app!!
It's like having someone else here that helps me take care of my Dad!!
I made a list of the commands for the lights, etc & hung one on his night stand & put the other beside his chair in the living room!!
He's also exploring, BY HIMSELF, different commands for Alexa. I've heard him ask her about the weather, baseball scores, etc. THIS LITTLE ITEM IS A TRUE GEM FOR SENIORS!! I love mine just as much & the quality of the sound thru the Echo is AMAZING for listening to music. I'm VERY PICKY about sound quality!! I have Bose speakers hooked up to my TV & have Bose ear buds as well. The quality of the sound from the Echo is just as good as Bose speakers!!
Read more
1,692 people found this helpful
Helpful
Report abuse

M. Moore
1.0 out of 5 stars My Echo was secretly listening in on me.
Reviewed in the United States on March 28, 2018
Color: Charcoal FabricConfiguration: EchoVerified Purchase
I have 3 Echo's and each one is now unplugged. If you go to the Alexa app and choose your device ---> settings and then history you'll find a long list of recordings the echo has made while secretly listening into your home. I had no idea this was happening and I find it very creepy. Nobody was using the wake word, etc. It just listened in and then recorded bits of conversation. I'm getting rid of them.

**UPDATE** I discussed this issue with Customer Service who, by the way, have the best Rep's in the world. Their engineers reviewed my data and concluded the sounds being recorded were coming from a TV in the room. At first it was hard to agree with them but after I listened over and over to a few of the recordings it was apparent it was from the TV. My Bad!! I'm back to being an Echo fan. 😊
Read more
1,326 people found this helpful
Helpful
Report abuse

Gaylord
5.0 out of 5 stars Remember GEN 2 is an updated version of the original. be sure you're reading reviews and online info that are up to date.
Reviewed in the United States on March 1, 2018
Color: Charcoal FabricConfiguration: EchoVerified Purchase
Let me preface this review by revealing a few facts about myself. I am male, aged 75 years old, and more tech savvy than most people my age, but if you can use a modern computer, and own one, you should have not problem using this device. IT IS SO FAR, MIRACULOUS, and intriguing! I bought mine about a week ago, and waited till a couple days ago to jump in with "both feet" and set it up. Even though I once did computer tech support for Dell computers, It was a long time ago now, and a lot of tech has evolved since then, and i have the same fear of new things as most people my age, though admittedly higher skills. I also own an Iphone 6s plus, of which I have mixed emotions. The Iphone is made by apple, and Apple's idea of "intuitive" and mine are very different. Microsoft is much better at designing "intuitive" into an operating system than Apple. Aniyway, You will need some type of connected WIFI device to use this product. (read that Cell Phone with it's own WIFI abilities, and Bluetooth built in) You will need to download the "Alexa App. " on that device to set up the Alexa products.

From that point on, simply plug in the Echo device into a regular 110V. wall outlet, it comes with a plug in adapter. There are no batteries in this device, although some have them. A NOTE HERE" YES, YOU CAN UNPLUG IT WITHOUT IT LOSING ITS BRAINS AND REQUIRING REPEAT SET UP. So though not specified anywhere I read it evidently has some on board nonvolatile memory built in that will allow this. ( i spent several research sessions attempting to find this out, and finally had to bite the bullet and just try it. ) I moved it from one room location to another and within a few seconds it greeted me and said it was operational. NOW I AM ONLY AN OLD GUY WITH PRETTY GOOD HEARING ABILITIES YET, (NOT EXACTLY AN AUDIOPHILE ) BUT WITH DOLBY DIGITAL SOUND, THIS IS ONE NICE SOUNDING SPEAKER SYSTEM,
FULLY AS GOOD AS MY 7 SPEAKER ALTECH LANSING ON MY PC. IT MAY EVEN BE BETTER.IF YOU HAVE A NORMAL EAR, YOU WILL BE AMAZED AT THE SOUND QUALITY!

Now I am still learning about this product. Every new thing I try I am pleasantly surprised. I plan to get at least a smart home door lock and thermostat to use with it in the future, and several light switches. I am no great fan of the "RING DOORBELL" (due to frequently needed battery recharging) at this point, but I understand Amazon has purchased that company and will soon have an interface app available to use with the "Ring System" If you want to keep up with the march of technology, this device is probably your best doorway to that end, since Amazon is committed to pursuing it. Others may drop out along the way. (NEW) I made a hands free phone call to my son this moring as a test of the phone capabilities. Sound on my end was like he was in the room. The Alexa app and it's capabilities are evolving technologies. Features will be added. (Mine did an update download while playing music) Don't be disappointed. It is attractively packed, and very capable, but the "instructions" are not detailed and are sketchy. Lean about it online as I did before you purchase it. Read as many reviews as your eyes and attention span will allow, and take the plunge! An education awaits you!
Read more
4,696 people found this helpful
Helpful
Report abuse
See all reviews