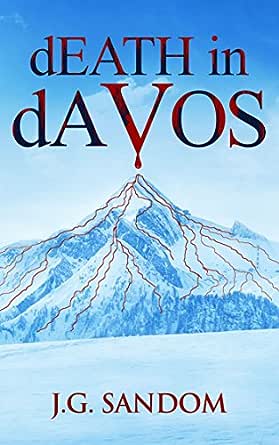 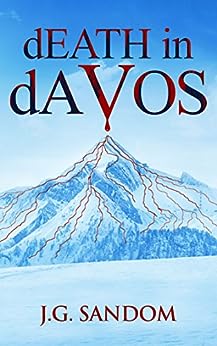 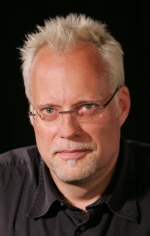 Make sure to visit my author page to view the book trailer of dEATH in dAVOS!

Born in Chicago, raised and educated throughout Europe, and a graduate of Amherst College (where he won the Academy of American Poets Prize), J.G. Sandom founded the nation's first digital ad agency (Einstein and Sandom Interactive - EASI) in 1984, before launching an award-winning writing career. J. has published eleven novels, plus several short stories and poems, including: The Blue Men, Gospel Truths - A Joseph Koster Mystery, The Wall Street Murder Club (optioned by Warner Bros., originally released with the title The Hunting Club), The God Machine - A Joseph Koster Mystery, The Publicist (a black comedy released under pseudonym Veronica Wright), The Wave - A John Decker Thriller and 404 - A John Decker Thriller; plus four young adult novels, including The Seed of Icarus, Kiss Me, I'm Dead (originally released under pseudonym T.K. Welsh, titled The Unresolved), Confessions of a Teenage Body Snatcher (originally released under pseudonym T.K. Welsh, titled Resurrection Men) and dEATH in dAVOS - A Robin Beauvais Manifesto. He is currently working on a new John Decker thriller tentatively called The Flower, and planning a new Robin Beauvais Manifesto called mURDER in mACAO. J. is also the Chairman and CEO of Mnemania, Inc., the company behind media capture and sharing app MemoryBox. Please visit the author @ jgsandom.com.

4.1 out of 5 stars
4.1 out of 5
7 customer ratings
How does Amazon calculate star ratings?
Amazon calculates a product’s star ratings based on a machine learned model instead of a raw data average. The model takes into account factors including the age of a rating, whether the ratings are from verified purchasers, and factors that establish reviewer trustworthiness.
Top Reviews

Carol A. Moore
5.0 out of 5 stars Be five steps ahead
Reviewed in the United States on December 1, 2016
Verified Purchase
If you want to know what hacking can do -- say, the day after tomorrow -- read J.G. Sandom's dEATH in dAVOS. As in his previous novel, 404, events he constructed will be real one day soon, as you're skimming Twitter or some tech-savvy site. Dastardly, but beautifully real.

Sandom Is five steps ahead of a loose set of nefarious (but can't-help-but-love-'em) nerds whose goal is to level global income inequality and have some fun doing it.

Robin Beauvais, a preternaturally brilliant young Haitian woman, is one of them. A popular blogger, she worms her way into the World Economic Forum in Davos to settle some old and deep scores with the global 1%, whose wealth insulates them from their serious criminal activity and what ought to be the pursuit of justice.

That she's developed an app to remove some of these folks and accommodate her own revenge makes for riveting reading, although I do worry that she doesn't get much sleep.

Throughout the novel, Sandom interjects well analyzed and shocking facts about global income inequality that will leave you boiling with indignation. But have faith. His scenario or something close to it will certainly happen and attract the serious attention of the world at last.

Ron Parker
5.0 out of 5 stars dEATH in dAVOS
Reviewed in the United States on January 5, 2017
Verified Purchase
dEATH in dAVOS
by J.G. Sandom

You can follow Sandom through social networks to learn his interests, his beliefs and anticipate his creative efforts much as his fictional character Robin Beauvais tracks the targets of her serial obsessions.

By mirroring the class separation of our real world, dEATH in dAVOS infuses the reader's imagination with the plight of the unprivileged and disenfranchised. Sandom's protagonist, a tech savvy killer, lives with a primordial instinct of justice for enemies who divide cultures with racism and ideology to execute their diabolical greed. Robin Beauvais delivers.
Read more
One person found this helpful
Helpful
Comment Report abuse

S.M. Joseph
5.0 out of 5 stars Deliciously evil and fun read!
Reviewed in the United States on September 22, 2016
Verified Purchase
This was a great thrill ride. I love strong women characters and this book gives us a great new strong teenage hero who's not a mutant or a vampire! A murder mystery in reverse Death in Davos made me miss my stop on the bus and cancel a lunch date just to finish it. If you've been looking for a book to get lost in this is the book. Please, please, please tell me that there's another installment coming with my favorite killer character!
Read more
Helpful
Comment Report abuse

James Charles Schroder
2.0 out of 5 stars The usual leftist pap complaining about leftist policies and blaming them on the usual 1 percent and the right.
Reviewed in the United States on October 24, 2016
Verified Purchase
The so called 99 percent more likely 10 percent would do much for themselves if they would stop blaming others for their problems and
quit waiting for a handout or a hand up and get up themselves and do
what they can to improve their lives. Getting a job that pays minimum
wage is a good start and doing that job the best they can and being
honest will soon lead to a better higher paying job. Every job is a good
reference. It takes time but can be achieved by anyone that takes a personal interest in themselves.
Read more
Helpful
Comment Report abuse

Omar Washington
4.0 out of 5 stars Holden Caulfield, Meets Harriet Tumbman, Meets Julian Assange - Meet Robin Beauvais
Reviewed in the United States on February 21, 2017
With snappy prose and an irreverence that belies the blistering and timely critique of global capitalism central to "Death in Davos", J. G. Sandom has crafted a captivating page turner. Murder, politics and a larger than life heroine drive this refreshing take on the international thriller. Rather than rely on the old tropes of the smooth Bond-like protagonist or the hard charging trench coat clad womanizing spook, we are introduced to an original character, Robin Beauvais a Haitian-American prodigy, who now introduced to the world - deserves her own sequel.

By setting his latest novel in Davos, Robin's originality is made all the more prominent and satisfying as she subverts a world of skiing, carousing and influence where white men are of course the normal denizens. But her ethnicity is only part of her story. A tech savvy 17 year old, Robin's essence springs more from her generational voice as she encounters a world where all the dice are loaded against her as she must make sense of it on her own terms.

And we must make sense of it along with her. Well researched, "Death in Davos" also tackles some of the intricacies of the Swiss security apparatus enough to ground us in reality. And of course the heartbreaking truth to this fiction is that reality is far more grotesque where issues of global capital and economic inequality are concerned. In this context one finds themselves snickering at her cleverness and rooting for the assasin as Robin befriends the Swiss inspector Celine Hirsch who is also portrayed with entertaining sensitivity.

Death in Davos is an ambitious novel where Sandom crosses the boundaries of race and gender with aplomb. In doing so, the author tackles important issues, heavy as a sledge hammer, delivered here with a light touch and in a story that once you start, you can't put down.
Read more
One person found this helpful
Helpful
Comment Report abuse

Mom of Three Boys
5.0 out of 5 stars Wickedly fun and suspenseful!! Left me wanting more!
Reviewed in the United States on July 6, 2017
If I thought my own teens were as fiendishly clever as Robin Beauvais I'd never sleep again! If you get lemons you make lemonade but if you're Robin and get billionaires who escape justice well then you make murder. A great read for young adults and adults. A great book to read as a family and discuss big topics like inequality, social anxiety and morality. I'm hoping this is a series cause I'd like to see what else and where else Robin gets up to!
Read more
One person found this helpful
Helpful
Comment Report abuse

jeannie brooks
5.0 out of 5 stars Brand new superhero!
Reviewed in the United States on July 17, 2017
Robin is a kind of Marvel superhero, with hacking skills, the ability to kick some serious butt, and her own YouTube channel where she interviews celebrities to find out about what kind of tech they like. She is young, really smart and murderously fun. If you liked Gone Girl and Dexter you'll love Death in Davos, it's like Agatha Christie and Gillian Flynn had a baby and she's a kickass! If you've ever wondered what Robin Hood would be like in the 21st century look right here.
Read more
One person found this helpful
Helpful
Comment Report abuse
See all reviews from the United States