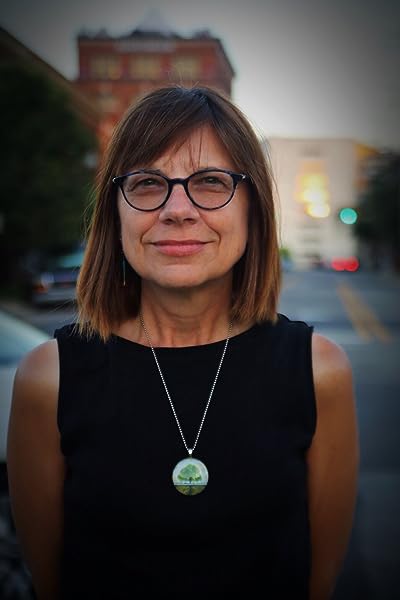 by Heidi McCrary (Author)
4.2 out of 5 stars 130 ratings
See all formats and editions
Sorry, there was a problem loading this page. Try again.

Germany, 1940. While struggling to survive at an orphanage, young Didi crosses paths with a rebellious, quirky girl who will either help her escape a life of abuse and uncertainty or lead her down an even darker path.

Fast-forward to 1970. With help from a worn leather journal, another young girl learns the story of Didi, who escaped war-torn Germany for a better life in America—except her life didn’t turn out as expected. The stories of these two girls intertwine and eventually collide one Christmas night when Didi, all grown up, finally remembers the secret she buried long ago.

Chasing North Star looks back at a time when four free-range siblings, cigarettes in hand, roamed the streets ’til sunrise and hid from a gun-toting, mentally ill mother who couldn’t help herself. Stingray bicycles, transistor radios, and late nights in the cemetery—just another day in Alamo. That is, until the youngest sibling stumbles upon Didi’s story.
Read more
Previous page
Next page

“Chasing North Star has heart and is packed with nostalgic cultural references from the Wonder Years era. Inspired by a true story, Heidi McCrary’s novel is no one’s fantasy of the perfect childhood. Part horror story, part love story, it keeps the reader engaged and lays bare what it’s like to grow up with a mentally ill mother who broke her children’s 45s but couldn’t break their spirits.”
—Lori Moore, TV/radio personality and actress

“
Chasing North Star explores universal themes of abandonment, isolation, grief, mental illness, and forgiveness in an authentic and engaging manner. The narrative is familiar, like a close friend sharing a secret. Heidi McCrary’s novel sheds light on the ways we are taught to hide or ignore the pain we see in others and just how much one person’s kindness can make all the difference to a person in their life journey.”
—J. Dylan Yates, author of The Belief in Angels and Szaja’s Story

“Chasing North Star is a poignant novel that beautifully captures the small-town childhood of four siblings trying to survive their mother’s frightening mental illness. The author sharply renders the generational impact of trauma by including shifts to the mother’s difficult past in wartime Germany.”
—Elise Schiller, author of Watermark

“Heidi McCrary delivers an unforgettable and unflinching coming-of-age novel about the ties that bind siblings in their complicated family struggles. Chasing North Star examines the pain—often terror—of growing up with a narcissistic, mentally ill mother and the fact that the love we all crave has to ultimately be found in ourselves.”
—Diana Y. Paul, author of Things Unsaid

Heidi McCrary is the youngest of five children. She has worked in the media world all her life; she spent many years with the West Michigan CBS TV station, and is currently in the advertising marketing industry. She is also a contributing writer for a regional women’s magazine. Embracing all that West Michigan has to offer, Heidi can often be found in one of the many wonderful towns along the Lake Michigan shoreline, or on the local golf course, working on her goal of becoming a mediocre golfer. She lives with her husband, Jon, in Kalamazoo, Michigan, just a short drive from Alamo, where she grew up, and owns the family woods depicted in Chasing North Star. Her two sons, Tyler and Phillip, are doing great despite being raised by a mother with no formal training. Chasing North Star is her first novel. She currently resides in Kalamazoo, MI.

Heidi is the youngest of five children and lives with her husband, Jon in Kalamazoo, Michigan, just a short drive from Alamo where she grew up. She now owns the family woods that are depicted in the book, where her children have been known to use as a place to get away from their own mother and father. Her two sons, Tyler and Phillip, are doing great despite being raised by a mother with no formal training.

Embracing all that West Michigan has to offer, Heidi can often be found hanging with her family in Kalamazoo and the many unique towns along the Lake Michigan shoreline or on the local golf course, working on her goal of becoming a mediocre golfer. Heidi has worked in the media world all her adult life—many years with the West Michigan CBS television affiliate, and currently in the advertising industry. She is also a contributing writer for a regional women’s magazine.

Kalamazoo Gal
5.0 out of 5 stars Truly a Binge Read!
Reviewed in the United States 🇺🇸 on November 20, 2020
Verified Purchase
A story of mental illness, seen through the eyes of nine-year-old Heidi. At a time when childhood should be carefree and innocent; a time when playing and interacting with other children should be the norm; a time when a child needs a safe place to land... Heidi is caught up in the dramatic and even dangerous reality of living with a mother whose mental illness and unimaginable past has shaped her life.

Although the story is wrought with tragedy, sadness and horror, the reader is privy to glimpses of happier and even comical moments. Also apparent is the pure adoration of a father who deeply loves his wife and children, and siblings fiercely protective of each other.

McCrary sucked me right in and I found myself wishing that the story would end in “happily ever after.” And, in probably the most important ways, it DID.
Read more
Helpful
Report abuse

Swulfensmith
3.0 out of 5 stars The format is interesting
Reviewed in the United States 🇺🇸 on November 5, 2021
Verified Purchase
The plot was gripping. The theme of mental Illness was revealing, especially because it was told from the point of view of a little girl, 9.
The book needs further editing. There were errors such as peddling/pedaling, lie down/lay down, etc.
Read more
2 people found this helpful
Helpful
Report abuse

melissa chrystal
5.0 out of 5 stars A wonderful book
Reviewed in the United States 🇺🇸 on October 10, 2020
Verified Purchase
Loved this book! The story is told From the view of youngest child of a family of the 70s intermixed with their mother’s heartbreaking upbringing in the 40s . So we’ll done. There is humor intermixed with heartache. Although not excusing her mother’s behavior we have a better understanding and empathy for those who struggle with mental health and the families affected by them. Absolutely loved the ending . Can’t stop thinking about this book . Can’t wait for the authors next one.
Read more
3 people found this helpful
Helpful
Report abuse

DEB
5.0 out of 5 stars A Well-written Coming of Age Novel
Reviewed in the United States 🇺🇸 on March 28, 2021
Verified Purchase
Chasing North Star, a sharply-drawn biographical novel of one woman's struggle with mental illness in the 1970s, is told primarily through the eyes of her nine-year-old daughter. Though often stark and sad, even frightening, there are plenty of bright moments filled with joyfulness and a playful sometimes droll humor. The frequent cultural references also brought back many personal memories.
Read more
One person found this helpful
Helpful
Report abuse

Adam Wells
5.0 out of 5 stars The dangers of stigmatizing mental health
Reviewed in the United States 🇺🇸 on September 30, 2020
Verified Purchase
This book perfectly encapsulates the danger of the hush-hush stigma around mental health among the post-war generation. Presented through sharp dark humor, you can't help but laugh at the frightening situations brought on by the reluctance to seek help and deal with the trauma of World War II. I highly recommend this book to any fellow baby boomer who remembers their parents saying "we don't talk about that" to their overly curious kids.
Read more
3 people found this helpful
Helpful
Report abuse

Lori V.
5.0 out of 5 stars Anyone that grew up in the 70’s can relate to this story in someway
Reviewed in the United States 🇺🇸 on October 12, 2020
Verified Purchase
Fascinating read with plenty of humor, yet touches on how families are connected and how children learn. A great story about survival and the love that binds siblings for life.
Read more
One person found this helpful
Helpful
Report abuse

Lynda Morse
2.0 out of 5 stars Story is very hard to get in yo.
Reviewed in the United States 🇺🇸 on October 7, 2021
Verified Purchase
Sometimes a novel interests one right from the beginning. This one, not so much….
Read more
Helpful
Report abuse
See all reviews