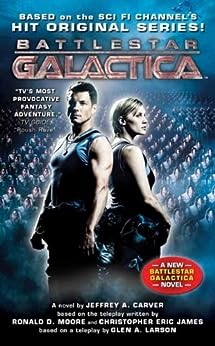 For forty years, the Twelve Colonies of Man experienced peace, united since the war against the man-made Cylons. The Cylons, mechanical beings created to perform the manual labor civilization required, were gone forever…or so humanity thought.

But in those years, the Cylons developed new Cylons that looked and acted like humans--with one goal in mind: to destroy all humanity! When they suddenly attacked the Twelve Worlds, humanity's extinction seemed inevitable.

Only a single warship survived the massive attack: Battlestar Galactica, the oldest ship in the fleet, ready to be decommissioned and turned into a museum. Commander William Adama, himself set to retire, had but one course: to marshal the meager forces available, a ragtag crew of misfits and green recruits, to prevent their enemy from wiping out the last vestiges of the human race. But the Cylons, stronger, smarter, and driven to destroy their creators, may just be too powerful for them and all of humanity to survive.

Books In This Series (4 Books)
Complete Series
Battlestar Galactica
Kindle Edition
Page 1 of 1Start OverPage 1 of 1
Previous page
Next page
Create your FREE Amazon Business account to save up to 10% with Business-only prices and free shipping.

"GALACTICA'S BACK, BETTER THAN EVER . . . You don't have to love sci-fi to love Battlestar Galactica . . . a great TV series."
--USA Today

"Rapidly shaping up to be the most influential Science Fiction series since Babylon 5 and the original Star Trek."
--TV Zone magazine.

"Even if you're not normally a fan of the genre, you may find that this Battlestar is smart enough and entertaining enough to win you over." --USA Today

"The new and darker Galactica is an intensely suspenseful journey of survival. Well worth staying home on Fridays to watch."
--Matt Roush, TV Guide

"GALACTICA'S BACK, BETTER THAN EVER . . . You don't have to love sci-fi to love Battlestar Galactica . . . a great TV series."
--USA Today

"Rapidly shaping up to be the most influential Science Fiction series since Babylon 5 and the original Star Trek."
--TV Zone magazine.

"Even if you're not normally a fan of the genre, you may find that this Battlestar is smart enough and entertaining enough to win you over." --USA Today

"The new and darker Galactica is an intensely suspenseful journey of survival. Well worth staying home on Fridays to watch."
--Matt Roush, TV Guide
--This text refers to an alternate kindle_edition edition.

A new novel based on the SCI FI Channel's biggest hit original series ever!

In 1978, Battlestar Galatica was born, inspired by the success of Star Trek and Star Wars. Now, re-imagined by the brilliant Star Trek writer/director Ronald A. Moore, Battlestar Galactica lives again, a hard-hitting, suspenseful sci-fi series unlike anything ever seen on television before. In late 2003, an original Sci-Fi Channel miniseries heralded its arrival. Starring Edward James Olmost and Mary McDonnell, it electrified viewers and critics alike, and has been hailed as a landmark in television drama.

Now, published for the first time, here is the novel based on that exciting miniseries.

"Even if you're not normally a fan of the genre, you may find that this Battlestar is smart enough and entertaining enough to win you over."
--USA Today

"The new and darker Galactica is an intensely suspenseful journey of survival. Well worth staying home on Fridays to watch."
--Matt Roush, TV Guide
--This text refers to an out of print or unavailable edition of this title.

Jeffrey A. Carver's most recent novel, Eternity's End, was a finalist for the Nebula Award. The author of more than a dozen novels, he lives in Arlington, MA.
--This text refers to an out of print or unavailable edition of this title.
Read more

4.5 out of 5 stars
4.5 out of 5
57 global ratings
How are ratings calculated?
To calculate the overall star rating and percentage breakdown by star, we don’t use a simple average. Instead, our system considers things like how recent a review is and if the reviewer bought the item on Amazon. It also analyzes reviews to verify trustworthiness.
Top reviews

Star Quest
5.0 out of 5 stars Just as Riveting as the TV Series
Reviewed in the United States on May 30, 2021
Verified Purchase
The 2004-2009 Battlestar Galactica series was and still is, in my opinion, the best TV series in the history of human civilization. While I am limited on time due to family and work commitments to rewatch the whole services, I stumbled upon the book versions of BSG, which allowed me to read at a more comfortable pace. This book covers the events of the 3-hour miniseries released in 2003. It was very well written, and I loved reconnecting with the characters of the story. There are very few stories and shows that can truly portray human nature, like BSG, both televised and written.
Read more
Helpful
Report abuse

J. E. Nelson
3.0 out of 5 stars Novel Discovery
Reviewed in the United States on October 6, 2020
Verified Purchase
This novel was an impossible discovery...found the series on TV recently and just had to read the book, too. My copy of the book based on the TV series, was bit beat up when it arrived--but, like the ships in the show, still viable.
Read more
One person found this helpful
Helpful
Report abuse

John Windfall
5.0 out of 5 stars The Cylons are coming
Reviewed in the United States on November 25, 2012
Verified Purchase
Man made the cylons and now they are coming for their revenge. As the book begins "Life out there began here" we are treated to the beginning of a series not only about what is but what could be. This book has conflicts between religious beliefs, military vs civilian, representative government vs. one man military rule. Also explored is the fight for human survival in an infinite universe. The main question that is asked and often is just what is "human" and being human. While the questions aren't answered in this book it goes a long way to explaining the beginnings of the TV series. It asks, could a machine be human? You are the one to answer.
Read more
3 people found this helpful
Helpful
Report abuse

Dwayne McClellan
5.0 out of 5 stars By your Command
Reviewed in the United States on January 11, 2021
Verified Purchase
This book answered some questions I have. This version of BSG is good, however I'm old school. This BSG IS GOOD but will never be as good as the 1978 BSG from my childhood. First 1977 Star wars, Then BSG follows one year later
Read more
Helpful
Report abuse

BEST BOOK I'VE EVER READ! AND BEST TV SERIES IVE EVER EATCHED IN THE WORLD!! Tied for 1st with Greys anatomy but might have a nose out in front.

Just wow. I love all of the characters, they are just so real.

Marco Clupper
5.0 out of 5 stars Great series, Great author.
Reviewed in the United States on April 8, 2006
Verified Purchase
It's always interesting seeing an author get to play in anothers universe, especially as in this case where the story is already established. Usually I like original works better as you get to see some of the authors personality come through in the story. In this case though I think it works very well. Mr. Carver does a real good job of moving the story along while having to fill in the backgrounds necessary that you can take for granted on tv or a movie. After all when watching the show you can get an impression of what a character is thinking by looking at their expression or for that matter the "stage" for where a scene takes place is often times very important to the characters interaction. All these things have to be conveyed in print and Mr. Carver does this without bogging down the story. Definitely the the sign of a deft and well-practiced author. Makes, sense the guy does have over 30 years of writing experience. I think if your a fan of BSG, Jeffrey Carver or just like to sit down with a good book i'd put this on your list to read!
Read more
5 people found this helpful
Helpful
Report abuse