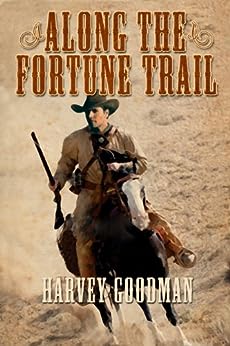 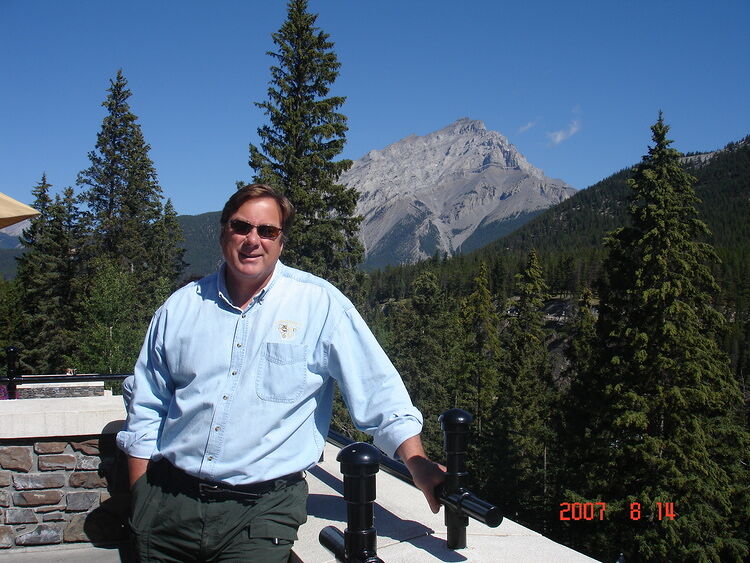 Along The Fortune Trail Kindle Edition

by Harvey Goodman (Author) Format: Kindle Edition
See all formats and editions
Sorry, there was a problem loading this page. Try again.
One man's reward. One man's journey. One man's fight for a new life.

From the time Sammy Winds pulled on his first pair of spurs, he understood the difficulties of growing up in the new American West. An orphan since he was a small child, Sammy grew up working long, dusty days as a ranch hand on the Twin T, busting broncs, herding cows, and learning to spit his tobacco juice with contest-winning precision. Sammy became used to sweat and toil and tough ranch life, but after an encounter with a murderous outlaw leaves Sammy the prospect of a fortune, the cowboy leaves behind his love and everything he has ever known to embark on a journey across the untamed West. Only he doesn't know just how dangerous his adventure is about to become.
Follow the rugged excitement as Sammy treks Along The Fortune Trail, fighting off cruel weather, attacking renegade Apaches, and overcoming the evil ploys of enough crooks and villains to send any regular saddle-sore hombre heading home to the hills. But Sammy isn't just any man. With his eyes set on the chance of a lifetime, Sammy Winds tilts his hat toward the mysteries of the trail, ready to gallop his way to the riches awaiting him in Denver and prepared to stomp on any obstacle in his way.
Read more
Previous page
Next page

Harvey Goodman grew up in Los Angeles then attended the University of Colorado where he studied history and developed a love for the great outdoors and Western literature. Further inspiration developed from his work in remote western locations during his years running an oilfield vessel buildings outfit. Mr. Goodman eventually gravitated to public education where he served as a high school history teacher. He subsequently became a principal and superintendent of schools. Harvey took up writing in retirement.

In his youth, Mr. Goodman did well as an athlete, being named the Most Valuable Player of the University of Colorado football team, and he played as a starting guard in The Senior Bowl, The Coaches All America Game, and The East-West Shrine game. He was drafted by the St. Louis Football Cardinals and played in thirty-eight NFL games, including the 1976 season for the Denver Broncos.

Mr. Goodman's novels have won numerous awards, including a champion of all categories finish with 'Best Overall TOP PICK' in the 2017 Feathered Quill Book Awards for his political suspense novel, 'In the Event Of'. He also won a Gold/1st Place Award for his memoir 'So Too My Love'.

Harvey's most recent action-adventure western offering, Brave Rider, (2020) tells the story of a young Pony Express rider in the Utah/Nevada territories who by fate falls in league with a Paiute tribe. He also penned a screenplay based on Brave Rider that is currently optioned. Harvey's screenplay for his first novel 'Along the Fortune Trail' won the 'Best Script' award of the 2018 Los Angeles Cinema Festival of Hollywood (summer season), and also received the Cinema Veritas Award for Best Screenplay of the 2018 Veritas Film Festival.

Sam B. Wagner
5.0 out of 5 stars One of the Best on the Old West - Outstanding Characters and Action
Reviewed in the United States on October 22, 2015
Verified Purchase
An excellent and hard to put down saga with the reality of locations and the times places this as one of the really worthwhile books on the classic old west, far different from the "Dime Store Novels" that seem to permeate the category. Sammy is a very resourceful and likable young man whose good nature gets him into trouble, and his generosity creates friendships and lasting impressions wherever he rides. His flaws fail to overcome him, and his curiosity fails to trap him, and his apparent good nature opens doors for a variety of things, good and bad, that just seem to happen. Filled with the everyday that makes everyday special and a treat to read. This is the first of a series and not sure just how many volumes will get Sammy safely through life. It will be well worth the time to find out as volume two is already published.
Read more
One person found this helpful
Helpful
Report abuse

Mike
5.0 out of 5 stars Great Story
Reviewed in the United States on May 5, 2022
Verified Purchase
This great story has been one of my best read books! The author has used the smallest details that make it one of best books I have read in my life, and I have read so many in my more than three quarters of a century! I would encourage readers of all ages to read Along the Fortune Trail!! Thanks Mr Goodman!!
Read more
Helpful
Report abuse

JD
4.0 out of 5 stars Excellent story except for the ending
Reviewed in the United States on July 8, 2019
Verified Purchase
Great story that I thoroughly enjoyed except for the ending. It had humor, tense moments, some action and flowed well. The ending was left hanging with Sammy Winds going off to get the best steak in town. So what happened to his love interest Jenny, and the brothers Taylor? Does he go back to Jenny or get back with the other woman? Does he decide to go back to work at the Double T, or now that he's essentially rich does he settle down in Denver? Otherwise would have been 5 stars.
Read more
Helpful
Report abuse

Angel S.
5.0 out of 5 stars Fun Read. Go for it.
Reviewed in the United States on May 6, 2018
Verified Purchase
The book is an enjoyable read. I bought the sequel as soon as I finished this book. Mr Goldman's writing brought old New Mexico Territory and the characters go life. I have go say, fun to read.
One note to the author. Boysenberries, for the pie in the story, were a cross between a blackberry highbrow (loganberry) and a raspberry created by Mr Boysen in the early 1900s and then grown at Knots Berry Farm beginning in 1920. I believe Sammy probably had a blackberry pie. Just a thought. Love boysenberry pie, and this book! 😉
Read more
One person found this helpful
Helpful
Report abuse

Teresa H. Meyers
5.0 out of 5 stars Wonderful book
Reviewed in the United States on March 4, 2021
Verified Purchase
One of the best western books if not the best I have ever read. Loved every page and hated for it to end. Thanks for a great adventure in the old west.
Read more
Helpful
Report abuse

Twin Two
5.0 out of 5 stars Enjoy this wonderful story of the old West
Reviewed in the United States on December 6, 2014
Verified Purchase
This story was one I really loved. The main character, Sammy Wind, was rescued by twin bachelors who were the owners of a large ranch. He grew up with good loving care, great ideals and an excellent education. His actions in a gun fight protecting himself led him to a fine reward. The book was full of interesting characters and a lot of experiences along the way to Denver to collect his reward. This was a story with a hero who showed bravery and compassion to others.
Read more
Helpful
Report abuse

mzbeastle
4.0 out of 5 stars A "nice guy" western. Yep. And enjoyable!
Reviewed in the United States on March 29, 2015
Verified Purchase
I'm attracted to westerns like this, with the good guys and bad guys simply delineated, and the de facto romance...along with insight into life on the ranch. This one was a quick read, but enjoyable. Pretty much follows the standard "western" genre, but if you like that, you'll enjoy this book too.
Read more
One person found this helpful
Helpful
Report abuse

Kindle Customer
4.0 out of 5 stars A well written and inoffensive western
Reviewed in the United States on January 7, 2019
Verified Purchase
The story is a very traditional western. That's a good thing, especially if you want a child safe tale with inspirational themes. Mr. Goodman's prose is clean and descriptive.
Read more
Helpful
Report abuse
See all reviews

Kindle Customer
4.0 out of 5 stars Reasonable
Reviewed in the United Kingdom on April 15, 2020
Verified Purchase
Quite a fair story and quite well written a bit strange in places but the only problem with it is it has no proper ending just comes to a dead end
Read more
Report abuse

Dan @ Ottawa
3.0 out of 5 stars Well written but lacks steady excitement
Reviewed in Canada on April 28, 2017
Verified Purchase
A mixture of action and lulls. The book starts of with a nice bounce then drags with filler for quite some time. Another peak is reached near the middle of the book and then there's a steady decrease in action. The book ends on a quiet note with many questions unanswered.
Read more
Report abuse

Aloke
5.0 out of 5 stars Very well written book!
Reviewed in India on March 25, 2018
Verified Purchase
A very refreshing story with a lot of details. Buy it at your own risk, you will not want to put it down once you start.
Thanks Harvey for the nice read.
Read more
Report abuse
See all reviews