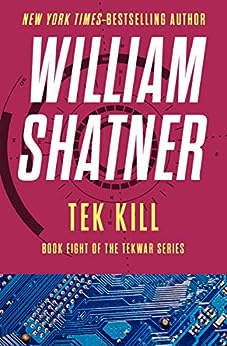 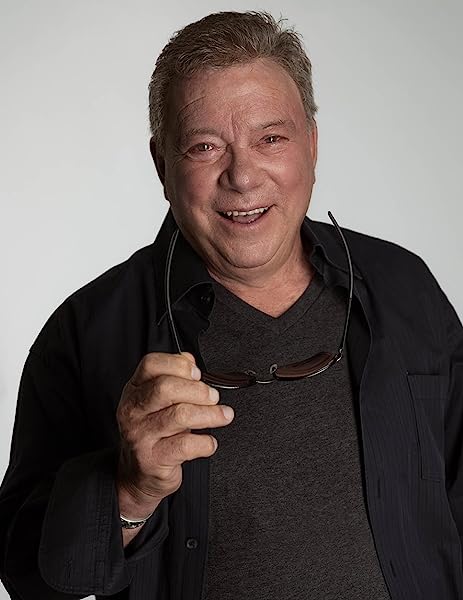 by William Shatner (Author) Format: Kindle Edition
Book 8 of 9: The TekWar Series
See all formats and editions
Sorry, there was a problem loading this page. Try again.
In order to expose a sinister, far-reaching criminal conspiracy, detective Jake Cardigan , the twenty-second century’s most able private detective, must prove that an open-and-shut murder case is anything but

Walt Bascom, head of the Cosmos Detective Agency, is in serious trouble. Video surveillance in the home of superrich businessman Dwight Grossman clearly shows Bascom murdering the entrepreneur in cold blood. Bascom swears he didn’t do it, and he’s relying on his agency’s best investigator, Jake Cardigan, to prove it somehow.

Jake and his partner, Sid Gomez, have their work cut out for them. The only “evidence” on their side is the testimony of the dead man’s sister, Susan, who claims she’s had telepathic visions of her brother’s true death. But Susan is an admitted devotee of the powerful, reality-altering electronic drug Tek. Whoever wanted her brother dead—and Bascom accused—went to great lengths to set up the scheme, and those responsible are not going to sit idly by while a pair of snooping private eyes and a burned-out Tek fiend start digging for answers. To keep the killers’ dark and very dirty secrets hidden, one corpse may not be enough.

This ebook features an illustrated biography of William Shatner including rare images and never-before-seen documents from the author’s personal collection.

Limited-Time Offer
Join Audible Premium Plus for 60% off. Get this deal
Next 2 for you in this series See full series
Total Price: $10.98
Books In This Series (9 Books)
Complete Series
The TekWar Series
Kindle Edition
Page 1 of 1Start OverPage 1 of 1
Previous page
Next page

“Each book offers fast action, a well-drawn, grittily realistic future world, some characters we know and like, some new ones, and, increasingly, a pleasant, dry wit.” —Booklist

William Shatner (b. 1931) is a Canadian actor, author, and film director, known for his irreverent charm and his star turn as Captain Kirk in the original Star Trek television series, as well as many other roles. Born and raised in Montreal, Quebec, Shatner was cast in Star Trek as the courageous, unpredictable Captain James T. Kirk in 1966. The show became a cult hit in syndication, leading to a number of spin-offs and movies. Shatner starred in seven Star Trek films beginning with Star Trek: The Motion Picture in 1979. He later played leading roles on the television series T.J. Hooker (1982–86) and Boston Legal (2004–08). Shatner has also published a number of novels, most notably TekWar (1989), a science-fiction thriller that inspired eight sequels as well as video games and a television series. When he isn’t working, Shatner and his wife, Elizabeth, divide their time between Southern California and Kentucky.

William Shatner has cultivated a career spanning over 50 years as an award-winning actor, director, producer, writer, recording artist, and horseman. He is one of Hollywood’s most recognizable figures and a major philanthropist.

His accomplishments in television, film, and stage would take a great deal of time and more space than allotted here.

In 1966, Shatner originated the role of “Captain James T. Kirk” in the television series Star Trek. The series spawned a feature film franchise where Shatner returned as Captain Kirk in seven of the Star Trek movies, one of which he directed.

He won Emmys and his first Golden Globe for his portrayal of eccentric lawyer “Denny Crane” on both The Practice and Boston Legal. He received four more Emmy nominations as well as other Golden Globe and SAG Award nods.

Shatner's Raw Nerve, which aired on Bio, was his own edgy, celebrity interview series. Each episode showcased Shatner getting to know his guest on an intensely personal level, touching upon subjects not normally visited on other talk shows. Guests have discussed topics such as addiction, grief, childhood, marriage, combat and parenthood.

Mr. Shatner was cast in the NBC hit show Better Late Than Never in the late Summer 2016 and that show will be returning with a second season in 2017.

His love of music inspired him to record the critically acclaimed album Has Been. The Milwaukee Ballet performed “Common People,” a dance presentation set to several numbers from the record; the event and its preparations are featured in the documentary Gonzo Ballet, which played to sold out houses at film festivals worldwide.

Shatner’s musical project, Ponder The Mystery, with lyrics by William Shatner and music by Billy Sherwood was released October 2013. It followed the well-received, space-inspired album Seeking Major Tom, which featured songs by U2, Frank Sinatra, Queen and Pink Floyd and was released in October 2011.

Off the screen and broadcast waves, Shatner has authored nearly 30 best-sellers in both the fiction and non-fiction genres. His autobiography, Up Till Now, was a New York Times best-seller and was followed by Shatner Rules which was released in October 2011. William Shatner’s book, Leonard: My Fifty-Year Friendship with a Remarkable Man, was released in February 2016 appearing on the NY Times Bestseller list. William Shatner’s newest book, Spirit of the Horse: A Celebration in Fact and Fable, will be released in May 2017.

Shatner has been successful in another area — horse breeding. A longtime dedicated breeder of American Quarter horses, he has had enormous success with the American Saddlebred, developing and riding world champions and has won numerous world championships in several equine events. His passions for horses and philanthropy were united when he started the Hollywood Charity Horse Show (http://www.HorseShow.org), which benefits Los Angeles-based children’s charities.

Shatner continues to act, write, produce and direct while still making time to work with charities and further his passion in equestrian sports. He and his wife, Elizabeth and three married daughters live in Los Angeles.

Kevin M. Derby
VINE VOICE
3.0 out of 5 stars Some Merits But Tek Series is Growing Increasingly Stale After Eight Outing
Reviewed in the United States 🇺🇸 on September 20, 2018
Verified Purchase
The eighth book in the “Tek” series by William Shatner with a strong assist of Ron Goulart, “Tek Kill” ranks as one of the weaker books in the series. Sci fi detective Jake Cardigan remains a solid lead character but the book takes the series in too many odd directions, including telepathy which frankly doesn’t fit well in the “Tek” universe. Add in too much focus on Cardigan’s son once again playing junior detective and there are some major problems. There are some nice touches to be sure and some exciting scenes. The plot doesn’t slow down in the slightest which redeems the problems to some extent. It was nice to see some focus on Walter Bascom and his daughter ranks as one of the more vivid characters in the later half of the series. Still, after eight books, the series is getting stale and this formulaic entry doesn’t turn that around.
Read more
Helpful
Report abuse

Delia Binder
2.0 out of 5 stars Started, Didn't Finish - Maybe Shatner Really DID Write This?
Reviewed in the United States 🇺🇸 on March 1, 2019
Verified Purchase
In this, the eighth book in "William Shatner"'s TEKWAR series (it's a pretty open secret long-time SF/Pulp scribe Ron Goulart is actually responsible for the books), Jake's partner Sid Gomez has been arrested for the murder of his ex-wife, who called him and begged for help shortly before her death. That's a structure that's durable and should be entertaining to read - but here it feels like a paint-by-numbers job.
Read more
Helpful
Report abuse

Daniel Staggers
5.0 out of 5 stars Great Books!
Reviewed in the United States 🇺🇸 on April 26, 2016
Verified Purchase
I have the whole set on Kindle. I had read the first three many years ago and was the first thing I bought for my Kindle. I didn't know they got up to 8 books. Nice.
Read more
Helpful
Report abuse

Jeffrey A Edmister
5.0 out of 5 stars Five Stars
Reviewed in the United States 🇺🇸 on March 23, 2015
Verified Purchase
Item was as described and shipped fast.
Read more
Helpful
Report abuse

Amazon Customer
5.0 out of 5 stars A fantastic read
Reviewed in the United States 🇺🇸 on January 29, 2000
Another hit in the "Tek" series. On the edge excitement from page 1 to the last.
Read more
Helpful
Report abuse
See all reviews