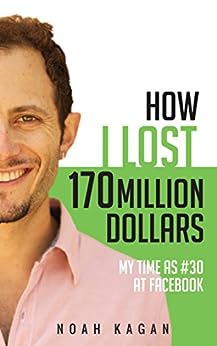 How I Lost 170 Million Dollars: My Time as #30 at Facebook Kindle Edition

4.3 out of 5 stars
4.3 out of 5
213 global ratings
How are ratings calculated?
To calculate the overall star rating and percentage breakdown by star, we don’t use a simple average. Instead, our system considers things like how recent a review is and if the reviewer bought the item on Amazon. It also analyzes reviews to verify trustworthiness.
Top reviews

Thomes V.
4.0 out of 5 stars Nice autobiography on working at Facebook
Reviewed in the United States on July 18, 2021
Verified Purchase
While the title is technically correct, getting fired for something that you weren't directly responsible for kind of negates that you were the one who lost the 170 million.

Besides that, this book is a neat inside look at Facebook during its' early years. It's a flashback to the past when you see older tech such as Blackberry and Yahoo mentioned now that they are all but irrelevant, plus seeing how some of the Facebook features developed from nothing.

The relationships mentioned were interesting, such as one person who joined a party late, wagered in poker and asked for their money back because they had to leave, but there wasn't anything too deep.

Overall, it's a fine autobiography with some interesting facts, but there's not much to go back on for another read.
Read more
Helpful
Report abuse

Seth
5.0 out of 5 stars A fascinating look into the trials and triumphs of Noah Kagan
Reviewed in the United States on February 17, 2016
Verified Purchase
Noah's story is a fascinating one filled with highs, lows, and fantastic lessons that are valuable to anyone (not just entrepreneurs).

Here were some of my favorite stories and anecdotes from this book:

Noah talks about how when he walked in on the first day there were loose wires hanging from the ceiling, pizza boxes everywhere, and a sea of IKEA desks. He does a great job of placing the reader in his shoes and gives a fascinating look in to what life was like for the early employees.

Can you imagine what it must've bene like to work with a 24yr old guy that while skyrocketing to superstardom also walked around the office with sword? Well you don't have to because Noah tells you all about in the book.

---How he dealt with getting fired and loosing out on, you guessed it, 170 million dollars

Something that isn't mentioned in the title is that after getting fired from Facebook he went on to work for Mint and lost out on another fortune. Probably the biggest lesson to be learned from this book is how to deal with circumstances that would make anyone cringe to even think about. Noah is very honest and open about his struggles and what worked for him.

This book is a quick read and you will learn a ton about business, life, and about finding out where you belong. Highly recommended!
Read more
8 people found this helpful
Helpful
Report abuse

Michael Gordon
5.0 out of 5 stars This is a good book if you need encouragement.
Reviewed in the United States on June 12, 2016
Verified Purchase
Noah Kagan offers a very intriguing look at what it is like to be an entrepreneur. Entrepreneurs are people who are not satisfied with the status quo. We have a strong desire to find better ways to do things. Rather than accept things as they are, we are able to imagine better solutions for people. I can imagine the dissatisfaction working for a large enterprise like Intel. In a large organization, it is very hard to feel as though one is anything more than a cog in the machine. Most people are not happy with their work at a large organization. Instead, they want to feel that they are doing something that has meaning. For an entrepreneur, if people are buying our service or product, it's a sign that we have successfully solved a problem for other people. There are always new solutions that we must work on. That is part of the exciting thing about being an entrepreneur. Even though Kagan got fired from Facebook, he doesn't trash Facebook or the managers at Facebook. He accepts responsibility and realizes that he needs to continue to work on the next path. A true entrepreneur certainly looks forward rather than backwards. This is a good book if you need encouragement.
Read more
4 people found this helpful
Helpful
Report abuse

A. N.
5.0 out of 5 stars Noah was already famous for App Sumo to me, but reading about his Facebook days was exciting.
Reviewed in the United States on May 22, 2015
Verified Purchase
I've been an App Sumo subscriber for years and I never really knew or even thought about who Noah Kagan was until he spoke to a Startup Bros. group I am in. What a great session he did~! I was a little surprised to learn he had worked at Facebook, because I knew him from App Sumo. App Sumo, over the years, has delivered great quality apps and different selling tools, including ways to make your own app. I'm not an extremely technical person, I came from the Arts side of Arts and Sciences, but I can certainly relate to seeing friends pass you by as they become rich & famous and not being able to escape seeing their success on a daily basis. Noah writes his story with a poignant look back at his Facebook days. It is compelling to have a look inside the most successful startup so far during its earlier days. A nice follow up to the movie for me ;-)

But to me, Noah was already famous for App Sumo. I was very excited to see him speak purely for that reason. Reading this book made him all the more fascinating and I will continue to check out his offerings wherever he posts them.
Read more
7 people found this helpful
Helpful
Report abuse

Life Trip
5.0 out of 5 stars Authentic Voice
Reviewed in the United States on June 4, 2018
Verified Purchase
They say there are 3 sides to every story. Your side, the other person’s side and the truth. Noah Kagan shares his side of the Facebook story in an authentic way without bashing anyone. He has praise for Mark Zuckerberg, and the criticism did not come across as an attack.

Towards the end chapters were short and I wanted to know more. The author should update this book letting us know what he’s up to now because the links at the end will not suffice 😊, Also toss in a few extra juicy stories and business lessons.
Read more
Helpful
Report abuse
See all reviews

Fusspot
5.0 out of 5 stars Engaging insight into the early stages of Facebook
Reviewed in the United Kingdom on December 10, 2014
Verified Purchase
Everyone in the UK has heard about Facebook and its founder, Mark Zuckerberg. But how many have heard of Noah Kagan, one of the whizzkids who worked with Zuckerberg while the company was still trundling along the runway?

This is a fascinating insider account into Kagan's all-too-brief time at the company in its start-up days and is replete with insights into the student-vibe corporate culture of the web sensation that Facebook became.

It also confirms much of what many of us know or heard of Zuckerberg, the ostensible kid genius... Not everything about him is commendable; to me, Zuckerberg appears ruthless in his dealings with other human beings which, of all his manifold attributes, is a horrible ingredient in his success.

Kagan, for his part, is refreshingly self-deprecating (which is so un-American for an American). And very commendably, he refuses to mope or harbour spite over his dismissal from Facebook. If anything, the experience appears to have focussed his energies on becoming what he now is: one of the top two or three experts within a small pantheon of world-class online marketers.

In fact, it was through reading his blog that I discovered his web marketing genius - and generosity towards his readers; the book and his time with Zuckerberg were later discoveries.

In any case, I can only commend this book as a 5 star experience. I know giving it 4 might have added some balance to all the glowing reviews over on the US Amazon, but I can only be honest about this. 5 stars it is!
Read more
4 people found this helpful
Report abuse

Essentially it's a long build up to the point where the author gets fired. Even that bits not terribly exciting. And then the book just face plants into the pavement. Nothing really happens after that. No real insights. Nothing really. I'm feeling a bit deflated.

Shame really as the title promised so much.

It's 2 stars because I admire the authors courage for picking himself up and carrying on, but so far as books go it lacks substance. Sorry!
Read more
Report abuse

S.T
4.0 out of 5 stars A decent, quick read
Reviewed in the United Kingdom on June 24, 2017
Verified Purchase
Good read with some fairly interesting tales. It felt a bit slow at first but picked up quickly. I enjoyed learning about how facebook was before it exploded to the size it is today - and the author has some nice general outlooks on life (ie money isn't everything)
Read more
Report abuse