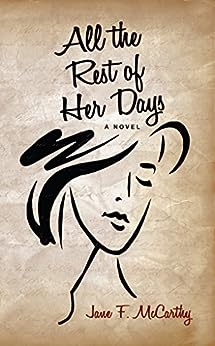 All the Rest of Her Days Kindle Edition

Jane F. McCarthy is a Registered Nurse and spent her career doing hospital nursing. She is an Infection Control Practitioner. Jane has been writing for twelve years. She is a member of The Association of Rhode Island Authors, the Neighborhood Guild Writing Group, the South County Book Club and the Narragansett Library Book Discussion Group. She lives with her husband, Gerry with whom she has traveled extensively and they live in Narragansett, R.I. They are the parents of three daughters and grandparents to seven. All the Rest of Her Days is Jane's debut novel. --This text refers to the paperback edition.

Ima Mermaid
5.0 out of 5 stars Excellent story, a must read!
Reviewed in the United States on December 11, 2016
Verified Purchase
Very interesting book. A real page turner. I couldn't put it down! Jane McCarthy does a great job developing the characters so that you feel like you know them, you care about them, and you want to know what happens next. This is not the type of book I would normally read, but after meeting the author, I decided to give it a shot. I was very happy that I did. I highly recommend this book to anyone!
Read more
Helpful
Report abuse

RUTH PAINE
5.0 out of 5 stars I enjoyed this book very much
Reviewed in the United States on July 29, 2014
Verified Purchase
This book had me right from the start. It touched my heart and I had trouble putting it down for I really wanted to know what was going to become of the characters. This book makes you feel the struggles and triumphs of real life. I enjoyed this book very much.
Read more
2 people found this helpful
Helpful
Report abuse

susan salvato
5.0 out of 5 stars Five Stars
Reviewed in the United States on March 10, 2015
Verified Purchase
Excellent read and compelling story.
Strengthened by the fact that it is based in a true story.

maime
5.0 out of 5 stars Five Stars
Reviewed in the United States on January 12, 2015
Verified Purchase
Well written and so very true for the time depicted.
Read more
Helpful
Report abuse

doc pat
5.0 out of 5 stars A moving and compelling read about an unwed teenage mother in the 1950’s
Reviewed in the United States on July 25, 2018
I picked up a copy of this novel at our church bazaar where the author was selling it. It was a story about an unwed pregnant teenager in the 1950’s who gave up her baby for adoption, and the many ramifications on her life, on the the baby she was forced to give up for adoption and all of her affected family members and friends.
From the very first page , I could not put the book down. The author captures every one’s emotions so well that you feel part of their lives.
This was her first novel and there were a few grammatical errors and misstatements, but none detract from the compelling and moving story.
I hope she keeps writing!
Read more
Helpful
Report abuse

Carlotta Dotcom
4.0 out of 5 stars When Dreams Come True...
Reviewed in the United States on July 21, 2014
A point brilliantly made by ALL THE REST OF HER DAYS, is that when tragedy befalls a family, there may be a happy ending, but rarely a happily ever after. Problems solved and answered prayers bring on new problems. With the best of intentions, we muddle through.

Fifteen year old Maggie Porter is forced by her parents to give her illegitimate son up for adoption. Her parents were neither cruel nor uncaring; but in mid-20th century Massachusetts, this was typical of the way such situations were handled.

When thirty years later, Maggie is contacted by her son, Peter, she has constructed a happy family life. Her husband and teen-aged daughters are aware that she suffered the loss of her first born.

Peter, adopted at birth by Irish immigrants, is provided a warm, secure family life. Nevertheless, his mother dies when he is thirteen and his father leaves Massachusetts to raise his children among family in Ireland. Peter always knows that someday he will make the effort to find his birth mother. In Ireland, he attends Trinity College, marries and becomes a middle-class husband and the father of two children.

Until he is sure of his decision to find his estranged mother and courageous enough to face her possible rejection, Peter circles around information about his birth that is pretty much readily available. Finally, he and Maggie are happily reunited. After several heartwarming visits between the two families in Ireland and America, Peter and his family relocate to Massachusetts.

Love smoothes the many day-to-day problems such a move entails. But a whole new set of dynamics in both families and unforeseen tragedy force Maggie, her husband, Joe, and other family members to survive as best they can. Again, love is the vehicle that sees them through.

Jane McCarthy wrote this book based on a true story about members of her own family. The tale manages to be both heartbreaking and heartwarming. It is inspired reading that shows how average families cope, thriving in good times and overcoming bad ones.
Read more
2 people found this helpful
Helpful
Report abuse

LeslieSnowPiver
5.0 out of 5 stars A Must read!
Reviewed in the United States on November 27, 2016
Put this on your list to read! I love how you open a new book and the story brings you right in! You will not want to put it down! The beginning on how life's are effected in the 50's with a teenage pregnancy and how it is handled. To see how the life of the Mother is lived after giving birth and giving the baby up. Then on to the life of what happens to the baby and his life. And then to see them come together. A must read. This is Jane's first novel, well done.
Read more
Helpful
Report abuse

Brigid Donohue
5.0 out of 5 stars Wonderful read! This book captures the difficult emotional realities ...
Reviewed in the United States on December 11, 2014
Wonderful read! This book captures the difficult emotional realities beneath the 1950's patina of rectitude. Jane McCarthy's tale of teen pregnancy, adoption and reconstituted family keeps us eagerly turning the pages and presents fascinating questions about the nature of family relationships and commitments. Maggie and the other female characters are especially compelling as we watch them navigate their identities as women, mothers, wives and as individuals. Good fodder for a book discussion club!
Read more
One person found this helpful
Helpful
Report abuse
See all reviews
Back to top
Get to Know Us
Make Money with Us
Amazon Payment Products
Let Us Help You
EnglishChoose a language for shopping. United StatesChoose a country/region for shopping.
© 1996-2021, Amazon.com, Inc. or its affiliates