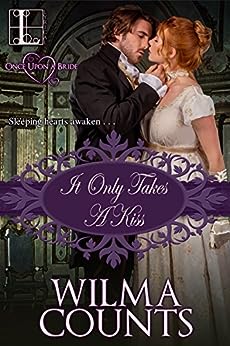 by Wilma Counts (Author) Format: Kindle Edition
Book 2 of 3: Once Upon a Bride
See all formats and editions
Sorry, there was a problem loading this page. Try again.
Best friends since their schooldays, Henrietta, Harriet, and Hero are wise and witty young ladies, embarking on the sometimes bumpy road to happily-ever-after, each in her own brilliant way . . .

Hero Whitby has harbored long-buried fears since a devastating attack by two young men of the privileged class. Now, while her peers aspire to husband-hunting, Hero pursues her passion to be a doctor, working alongside her father, a respected Devonshire physician. But when a badly beaten stranger is carried in to his practice, Hero is stunned by her reaction. Over three days of tending to the man, along with her instinct to heal, she finds herself intensely drawn to him . . .

Robbed and left for dead for highwaymen, Alexander Sterne has no memory of his past as a soldier in Wellington’s army—or as a carousing playboy. But as he becomes aware of his surroundings and the plight of the locals, Alex realizes only he can break the corrupt hold of an evil land steward. And when Hero’s tender kiss awakens him from sleep—and restores his identity—he knows that he must regain not only his strength but a newfound compassion . . . which can only be ignited by Hero and a meeting of hearts that may heal
them both . . .
Read more
Previous page
Next page

Try a virtual family staycation for less
Amazon Explore Browse now
Next 2 for you in this series See full series
Total Price: $5.98
Books In This Series (3 Books)
Complete Series
Once Upon a Bride
Kindle Edition
Page 1 of 1Start OverPage 1 of 1
Previous page
Next page

Kindle Customer
5.0 out of 5 stars Wonderful Writer
Reviewed in the United States 🇺🇸 on December 16, 2018
Verified Purchase
She knows how to spin a yarn with engaging characters, a good plot that moves along at a good pace. Loved it.
Read more
2 people found this helpful
Helpful
Report abuse

Kindle Customer
4.0 out of 5 stars What has happened to Romance book covers?
Reviewed in the United States 🇺🇸 on September 20, 2021
I usually enjoy all of Wilma Counts novels, but I was disappointed in this one. Perhaps because it was the usual overdone story in general (wealthy, injured Lord loses his memory and falls in love with the woman who takes care of him). Apart from that, why are all the men on Regency book covers so dreadful looking these days? They're so bland and uninteresting, and all seem to have that appalling five o'clock shadow like they haven't shaved in a month. It would be better to put a landscape or flowers on the cover.
Read more
Helpful
Report abuse

NV Lorie
4.0 out of 5 stars Romance, intrigue, and swashbuckling--oh my!
Reviewed in the United States 🇺🇸 on October 16, 2018
This is the second in Wilma Counts’ “Once Upon a Bride” trilogy, in which she gives three familiar stories the Regency Romance treatment. Kiss is inspired by Sleeping Beauty, but in this tale both the hero and heroine have been asleep.

Hero Whitby is her physician father’s assistant in every way allowed in her time and place. Now in her mid-twenties, she is intelligent and compassionate, but mistrustful of the men of her class. Hero has buried the reason for her mistrust—a brutal assault by some upper class boys. She remains “on the shelf.”

When a badly beaten, unconscious, and handsome stranger is brought to her father’s Devonshire clinic in the dead of night, Hero and her father patch him and wait days for him to regain consciousness. Hero finds herself drawn to him, and inspired by the fairy tale, kisses the sleeping patient.

When Alexander Stern awakens, he has no memory of his identity, although his nightmares are of bloody battles in Wellington’s army on the Peninsula.

Having read several of Ms. Counts books, I appreciate how she places her stories in the historical and social context of the period. She brings readers into the time not only with her skillful use of language but also with pertinent details of clothing, food, women’s issues, customs, and the workings of local estates. Estates were not merely grand houses, occupied by an oblivious upper class. Estates were economic centers that needed to be wisely managed and maintained. Farms, mills, breweries, mines, and all other industry worked together for the community’s well-being. The local aristocracy could make or break the system.

In Kiss, the town of Weyburn has for years been terrorized by Willard Teague, the estate’s evil steward. Teague exerts considerable power in the absence of the Weyburn heir who has been off soldiering on the Peninsula or whoring in London. Teague and his band of bully boys use the vacant estate, its mine, and farms in an increasingly violent smuggling operation. Teague employs fear and coercion to enlist the reluctant cooperation of the citizenry. And he’s got his eye on Hero as his next wife. <shudder>

Teague’s advances repulse Hero. After all, she treated his first wife for the abuse he dispensed. She also sees patients at a local home for unwed mothers, the unhappy result of men exerting their power.

As the story unfolds, most of what Hero holds dear in life is threatened--her ward Annabelle’s place in her home, her position as her father’s assistant, the lives of her siblings, and her romance with the handsome stranger.

When all seems lost, Ms. Counts compels readers to a dramatic and satisfying conclusion, complete with a little swashbuckling and, of course, a happily ever after for the newly awakened lovers.
Read more
Helpful
Report abuse

GumboMom
VINE VOICE
4.0 out of 5 stars Kiss to break the spell
Reviewed in the United States 🇺🇸 on December 21, 2018
Hero has worked along her physician father for several years and has learned through his tutelage how to heal. When a beaten and broken man is brought to them, after being left for dead, Hero takes over most of his care. When the man comes to after several days, he doesn't remember who he is so they call him Adam. Over time, he remembers that he is Lord Alexander Sterne and the lord of the Abbey in this small town in the English countryside.

Alexander is a seasoned soldier who suffers from nightmares from the battles and the men he lost and the horrors of war. Hero has her own nightmares that weigh heavily on her mind, also. The more time Alexander spends with Hero, the more he wants to be with her, maybe forever. Hero is skittish, though, and he realizes that maybe someone has hurt her and he wants nothing more to make the hurt go away. But, he is lying about not remembering who he is in order to get intel on his corrupt and evil land steward. Will Hero ever be able to forgive him when the truth comes out or will his lies destroy what could be between them?

I enjoyed the development of the characters in this book. There was some sex, although not terribly graphic. Their story is more about their budding relationship and their relationship with others in the community. There is smuggling, bullies and a lot of intrigue going on.

I was given an arc copy of this book by netgalley and I offer my review willingly.
Read more
Helpful
Report abuse

Krystal
4.0 out of 5 stars Strong characters & Engaging Storyline
Reviewed in the United States 🇺🇸 on October 19, 2018
While I do feel as though there were times when the pace of this story slowed to a crawl, and there were other times when details were added that were wholly unnecessary, on the whole, I very much enjoyed it. I liked that Hero was not only encouraged to help her father in the medical field, but respected all the more for it. I loved how strong-willed and independent she came across. This was truly a woman who was in charge of her own life, and who knew her own mind.

I feel similarly about Alex. He has been through the horrors of war, still in face relives them in his dreams, but even then he is determined to do what is right to help others. Once he learns how dire things are on his estate, he jumps in with both feet to see they are fixed (or least on the path of being fixed).

Their romance was an interesting one. On one hand I can understand Alex's reasons for some of the things he did, but it was because he didn't share those reasons that I can also understand why Hero reacted the way she did. There was a lot of drama and angst between these two that could have been resolved had they both not been so bloody stubborn.

All in all, I do think this story will be enjoyed by those who enjoy historical romances with strong characters, and intriguing story-lines. I would read more from this author!

DISCLAIMER: I received a complimentary copy of this novel in exchange for my honest review. This has not affected my review in any way. All thoughts and opinions expressed in this review are 100% my own.
Read more
One person found this helpful
Helpful
Report abuse
See all reviews