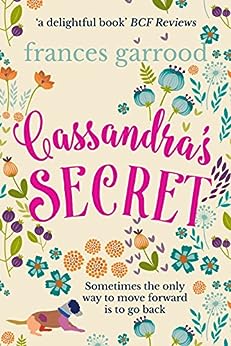 Cassandra's Secret: Sometimes the only way to move forward is to go back... Kindle Edition

Cassandra Fitzpatrick’s family isn’t quite like everybody else’s: her house is always full to bursting with the various misfits her mother houses as lodgers.The creative and chaotic household is all she has ever known and loved, until something awful happens that changes everything.Cass loves her mother deeply, but, as she gets older, she becomes more and more aware of her flaws.Will Cass have to distance herself from her family to find happiness? Or is she destined to follow in her mother’s footsteps?As Cass reflects on her memories, she must lay the ghosts of the past to rest and make peace with the secrets that have haunted her adult life…CASSANDRA’S SECRET is both a coming-of-age story and poignant return to the past, an intricate family drama of the close bond between mother and daughter, and the strength of love needed to overcome abuse and grief."Garrood's thoughtful prose tells the story of an extraordinary girl's passage to womanhood." The Big Issue in the North and The Big Issue Cymru"This is a delightful book, combining some emotional issues with humorous comments and moments." BCF Reviews"Frances Garrood is a magnificent writer" thebookbag.co.uk*** PLEASE NOTE THIS WAS PREVIOUSLY PUBLISHED AS THE BIRDS, THE BEES AND OTHER SECRETS ***
Read more
Previous page
Next page

Karri Williams
5.0 out of 5 stars I couldn't put the book down! The characters remind me of me and my mom. I want a second book. I cannot wait to read other books by Franes.
Reviewed in the United States 🇺🇸 on July 30, 2018
Verified Purchase
You are going to love this author
It touches a lot of subjects that are difficult. I highly recommend reading this book.
Read more
One person found this helpful
Helpful
Report abuse

SandyJ21
4.0 out of 5 stars A delightful and heartwarming read
Reviewed in the United States 🇺🇸 on May 18, 2018
EXCERPT: My mother turned pale, and it was at that moment that I understood. My mother knew. She knew what had happened, and that meant that she knew something about Uncle Rupert that none of us had known; something she should have warned me about; something she should have protected me from. I had always been aware that there was some dark secret in Uncle Rupert's past, and had hitherto assumed that it was in the nature of some personal tragedy. Now I realised that it was something far more sinister, and something my mother should have taken far more seriously when she invited him into our home all those years ago.

Cassandra Fitzpatrick’s family isn’t quite like everybody else’s: her house is always full to bursting with the various misfits her mother houses as lodgers.

The creative and chaotic household is all she has ever known and loved, until something awful happens that changes everything.

Cass loves her mother deeply, but, as she gets older, she becomes more and more aware of her flaws.

Will Cass have to distance herself from her family to find happiness? Or is she destined to follow in her mother’s footsteps?

As Cass reflects on her memories, she must lay the ghosts of the past to rest and make peace with the secrets that have haunted her adult life…

CASSANDRA’S SECRET is both a coming-of-age story and poignant return to the past, an intricate family drama of the close bond between mother and daughter, and the strength of love needed to overcome abuse and grief.

MY THOUGHTS: Cassandra's Secret is a love story. Not a romance, but a love story. It chronicles the bonds of love between the members of a slightly unorthodox family and their 'extended family' of lodgers, friends, and various other people who found themselves drawn in to their orbit. It is a story of love and loss, grief and joy, and overcoming trauma to learn to trust and love again.

It is a book that grew on me as I read, to the point where I wanted to be a part of this chaotic and unconventional household. It put a smile on my face that is still there. It gave me the same feeling I get on spring days when there is a promising warmth to the air, or on winter days when I am in front of the fire with a pot of tea and a plate of crumpets dripping with honey. It made me feel content, satisfied. It put a little joy in my life.

In her afterword, Frances Garrood tells us that Cassandra's Secret is 'loosely based on my own wonderful but eccentric mother' and some of her own experiences. Thank you for sharing, Frances.

Cassandra's Secret was originally published as 'The Birds, The Bees and Other Secrets'.

Thank you to Caoimhe O'Brien of Sapere Books for providing a digital copy of Cassandra's Secret by Frances Garrood for review. All opinions expressed in this review are entirely my own personal opinions.
Read more
Helpful
Report abuse

Allyson A.
4.0 out of 5 stars Enjoyable Read!
Reviewed in the United States 🇺🇸 on July 7, 2018
Cassandra Fitzpatrick doesn't come from a conventional home. She, along with her brother Lucas live with their mother and a host of other roommates. Due to Cass's moms welcoming anyone. There's a person at any given time, referred to as the Lodger, who lives in the basement. Uncle Rupert and Greta, the mother's friend to name a few.

Cass's mother suffered from mental illness, which requires everyone to pull together during these times. When not in a depression, Cass's mom, is a free spirit, the life of the home and often throwing parties for any occasion. Despite references to wanting Cass and Lucas to have their own lives, there are often undertones to keep the children at her beck and call. Often seeking comfort with strange men, but never married.

After Cass has a terrible experience with someone, and her mother tosses the individual out of the home. Cass has trouble coping and her mother sends her to a boarding school. Cass does well and feels that she's past the experience.

When Cass's mother announces that she is expecting, Cass and Lucas are not happy. Once Octavia is born, Cass and Lucas fall in love with her. Much like with Cass and Lucas, Octavia has no named father. The entire household helps raise the baby.

When Cass gets word of a tragedy, and returns home to help support her mother, her life takes a different turn. She seeks out to become a nurse, but finds the past haunting her on many fronts.

Despite the dysfunction of the family environment, I loved how the author gave the reader the knowledge of how close knit Cass and Lucas were with their mother. Cass and Lucas were more of caregivers at times to their mother; whereas, the mother was more of a friend to her children, but she loved them. Cass came into her own little by little, and it was no surprise the man she fell in love with, considering how much Cass wanted a father figure in her life. Enjoyable read!

I received a free ARC from NetGalley via Sapere Books in exchange for an honest review.
Read more
One person found this helpful
Helpful
Report abuse
See all reviews

Mrs Sandra Robinson
5.0 out of 5 stars Just lovely
Reviewed in the United Kingdom 🇬🇧 on November 14, 2018
Verified Purchase
I loved this book! It’s a gentle, sweet, touching and often amusing story. The characters come alive with each chapter and I found myself wishing they were real so I could befriend them!! Highly recommended if you’re looking for something relaxing and enjoyable to read.
Read more
Report abuse

mrs elizabeth a holloway
3.0 out of 5 stars Funny and moving
Reviewed in the United Kingdom 🇬🇧 on October 22, 2018
Verified Purchase
Very readable and in parts funny ,though also poignant .
The children are lovely and the relationship between them and their bohemian mum is warm.
The plot though is weak and predictable and some of the characters e.g. Call me Bill are a bit unreal.
Read more
Report abuse

Kath
5.0 out of 5 stars Brilliant
Reviewed in the United Kingdom 🇬🇧 on May 31, 2019
Verified Purchase
Absolutely brilliant read. It read like a true story and gripped me from the moment I started it. I have read all the books by this lady now and enjoyed every one.
Read more
One person found this helpful
Report abuse

AmaMags.zon Customer
5.0 out of 5 stars Another great novel
Reviewed in the United Kingdom 🇬🇧 on June 28, 2019
Verified Purchase
Once again another great read. True to form Francis Garrood has given us a book with lots of laughs, lots of tears and lot's of love.
Read more
Report abuse
See all reviews
Report an issue
Does this item contain inappropriate content?
Report
Do you believe that this item violates a copyright?
Report
Does this item contain quality or formatting issues?
Report