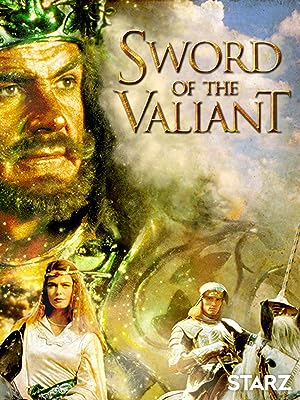 Sword Of The Valiant: The Legend of Sir Gawain and the Green Knight

(121)
4.41 h 42 min1983PG
Set during the legendary days of King Arthur, this lively medieval adventure offers a humorous retelling of the classic tale of Gawain and the Green Knight.

Keith C.Reviewed in the United States on September 11, 2019
1.0 out of 5 stars
Sean Connery must have wanted to use that ax on his agent after this one
Verified purchase
Difficult to believe that Sean Connery of 077 James Bond fame ever agreed to be in this, one of the worst movies ever made. Its a shame as the film could have been much better and they obviously had a budget and spent some time on it. Connery plays his part well, but the script is a mess and it doesn't even attempt to follow the story. The rest is just weird, and cringe-worthy. ( so why did I watch it ? English teachers are always looking for films to help with some of the tougher texts, but I threw this one in the trash)
3 people found this helpful

GraverobbergurlReviewed in the United States on February 19, 2021
5.0 out of 5 stars
The Story Made Reality
Verified purchase
This is a favorite movie from my younger days. This movie is a great way to tell the story of Sir Gawain and the Green Knight.
2 people found this helpful

ShaneReviewed in the United States on September 15, 2021
5.0 out of 5 stars
Classic version of Sir Gawain and the Green Knight
Verified purchase
While not completely literarily accurate, this version of the story with largely practical effects has both that nostalgic 80s quality, and that weird je ne sais quoi of mysterious and sometimes arbitrary seeming transpositions in plot direction that pervades a lot of Arthurian legend, and older literature generally. The plot isn't direct from any story, but it does draw heavily on elements of Arthurian legend and the story of Sir Gawain and the Green Knight, unlike the more recent film.

Don O'NeilReviewed in the United States on August 1, 2020
3.0 out of 5 stars
How much O'keeffe? Miles O'Keeffe!
Verified purchase
Does this movie make a lot of sense? No, but it's a weird artifact from the early to mid 80's swords and sorcery craze made popular by movies like Conan the Barbarian, and role playing games like Dungeons & Dragons. Based on the Arthurian story of Sir Gawain and the Green Knight, Sword of the Valiant's only real bright spot is the original James Bond; Sean Connery, who plays a small, but pivotal role as the Green Knight. I think this movie came out the year before Connery starred in Highlander, so If you're a Connery completist or a fan of Miles O'Keeffe (???) check this one out.
One person found this helpful

EinsatzReviewed in the United States on June 29, 2011
3.0 out of 5 stars
Surely you joust
Verified purchase
Make no mistake about it, this is a crummy movie! And yet, oddly endearing in its ineptitude. It takes a combined effort to make something this terrible, to waste the talents of such luminaries as Trevor Howard, Peter Cushing, John Rhys-Davies, and Sean Connery, all in one sitting. In this regard, they did a bang-up job, sparing no expense (one assumes the expenses, or expectations, weren't too high to begin with).
I guess this falls into the category of Sword & Sorcery for genre sake. It starts with a challenge (some would say threat) from a Green Knight (Sean Connery) that Gawain (Miles O'Keeffe) accepts then quickly segues into another fight with a Black Knight who guards a city to nowhere. Let's just cut to the chase and say there was a lot of running and fighting and running and more fighting (it was pretty disorganized). You might even call this a road picture because it certainly wasn't much of a buddy flick (Gawain having lost his sidekick/servant early on in favor of a distressful damsel with one very big ring). There's also a riddle I forgot instantly, a witch and a hag who stole Maleficent's headpiece, Sean Connery all a splendor in green and sparkles, some warring factions, Peter Cushing as a sage on the sidelines, a red Muppet-like frog, a horny prince (also a toad). Think of it as a live action Fractured Fairytale and your head won't explode while you're trying to figure it all out. Did I mention the unicorn? At least there was a jolly tone throughout and the story fairly zipped along....it didn't make much sense but at least they were quick about it! I especially liked the rack humor. And the joust.

Would I ever watch it again? Hey, I was stupid enough to watch it twice, that's my limit.
Not a keeper (so I won't be tempted to accidently watch it a third time).

And who names their kid Gawain? Don't tell me he didn't have a hard time of it in knight school!

Chuy the VikingReviewed in the United States on December 13, 2018
5.0 out of 5 stars
Pretty good
Verified purchase
Good corny fun. Kinda silly telling of a classic piece of literature. Not Sean Connery's best collaboration. Entertaining though.
2 people found this helpful

D. BagwellReviewed in the United States on August 28, 2018
5.0 out of 5 stars
An excellent version of one of the lesser known Arthur legends
Verified purchase
A surprisingly good movie considering Miles Okeif was the star. but despite that drawback it was well done and well acted.
3 people found this helpful
See all reviews
Back to top
Get to Know Us
Make Money with Us
Amazon Payment Products
Let Us Help You
EnglishChoose a language for shopping. United StatesChoose a country/region for shopping.
© 1996-2021, Amazon.com, Inc. or its affiliates