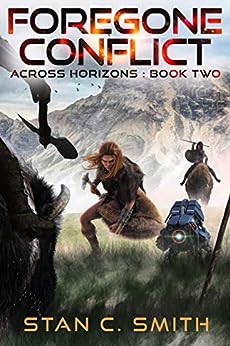 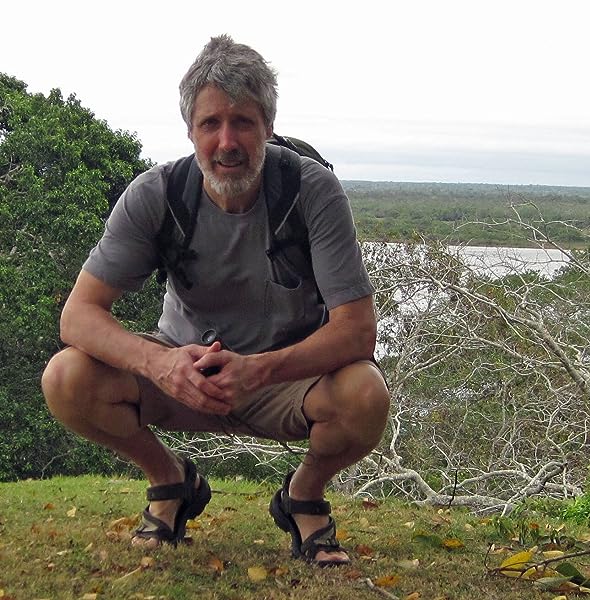 by Stan C. Smith (Author) Format: Kindle Edition
Book 2 of 4: Across Horizons
See all formats and editions
Sorry, there was a problem loading this page. Try again.

A desperate team of travelers. A world at war. A new destiny.

Once you jump back in time, you can never return. Lincoln Woodhouse knows this, but that doesn’t keep him from trying. After all, who wants to live forever in a brutal land of scimitar-toothed cats and vengeful Neanderthals?

Lincoln, Skyra, and the rest of the team escape by jumping forward 47,000 years. But the present isn’t what it used to be. In this new timeline Neanderthals are not extinct, and the world is at war.

With only enough equipment for two more time jumps, the travelers prepare to jump again before they get caught up in the conflict. Too late—the team is attacked and captured, and soon they find themselves amid an extraordinary society of spider-worshipping Neanderthals.

Lincoln and Skyra, although from two very different worlds, deepen their unusual bond as they become embroiled in a daring plan to launch a revolution. In the midst of turmoil and deceit, they make a new friend—who may embody their future destiny.

Foregone Conflict, the second book in the new Across Horizons series, is for readers who love time travel adventures, strange alien societies, and unforgettable characters.

Next 3 for you in this series See full series
Total Price: $13.97
Books In This Series (4 Books)
Complete Series
Across Horizons
Kindle Edition
Page 1 of 1Start OverPage 1 of 1
Previous page
Next page

Stan Smith has lived most of his life in the Midwest United States and currently lives with his wife Trish in a house deep in an Ozarks forest near Warsaw, Missouri. He writes adventure novels that have a generous sprinkling of science fiction. His stories are about regular people who find themselves caught up in highly unusual situations. His goal is to stimulate your sense of wonder, get your heart pounding, and keep you reading late into the night, with minimal risk of exposure to spelling and punctuation errors. His books are for anyone who loves adventure, discovery, and mind-bending surprises.Stan's Author Websitehttp: //www.stancsmith.com --This text refers to the paperback edition.

Stan C. Smith’s secret formula? Create strange worlds filled with even stranger creatures. Drop in unsuspecting characters. Shake vigorously. The results are always fun—unless you’re a character in his worlds. Stan lives with his wife Trish deep in the Ozark Forest of Missouri, where creatures are more docile than those in his novels. His goal is to stimulate your sense of wonder, get your heart pounding, and keep you reading late into the night. His books are for anyone who loves adventure, discovery, and mind-bending surprises.

Rick Kester
5.0 out of 5 stars A great adventure with Lincoln and Skyra
Reviewed in the United States 🇺🇸 on August 19, 2020
Verified Purchase
Stan C. Smith's Foregone Conflict is a worthy extension of the story of modern Lincoln Woodhouse and Neanderthal female warrior Skyra. Lincoln's team is taken captive in an alternative present by a Neanderthal civilization. The romance between Lincoln and Skyra advances despite Lincoln's knowledge that he is being manipulated by his own future creation, the drone Ripple.
The Neanderthal elite control their own people by promoting perpetual warfare with unchallenged propaganda. It reminds me of how we are taught that easy long-term credit makes homes, college and medicine affordable when credit actually allows vendors to inflate prices until we are mortgage slaves for life.
Who to trust is a constant dilemma with Lincoln, Skyra and Ripple seeing different paths as desirable.
Readers of Obsolete Theorem will be rewarded with details on how Skyra and Lincoln predict imminent aggression in a manner more subtle than my own.
Skyra's vow to go with Lincoln to the ends of time or the ends of the Earth is heartwarming. I can't wait to see what comes next.
Read more
Helpful
Report abuse

Hard2Please
5.0 out of 5 stars A little weird but still good!
Reviewed in the United States 🇺🇸 on April 13, 2021
Verified Purchase
I guess because there was a lot of foreign language translation this book was wordy. It was interesting to think that the two species had been at war for thousands of years but also very depressing. I enjoyed it enough to get the next book. But the complaint I had about the first book is even more aggravating now. At the beginning of this book, the correct plural form of cactus was used, that is, cacti. Then at the end of the book it was back to cactuses. So what? You learned something and then you forgot it? All of you? Author, editor, beta readers, friends and relatives? Holy homo sapiens!
Read more
Helpful
Report abuse

RF
4.0 out of 5 stars Entertaining and colorful
Reviewed in the United States 🇺🇸 on October 7, 2020
Verified Purchase
Book 2 of this series is very nicely crafted. Like the first, it is not overly wordy and over-descriptive. Moves quick and changes scenery quickly. You find yourself drawn to the characters and their struggles (Stan did a good job of this). Remember, this is a time travel adventure that will move up and down the time stream spectrum. If you are a fan of Stan Smith you will enjoy this book. If you are not familiar with his writing, I recommend this series. He does do a great job at entertaining the reader and is very creative.
Read more
Helpful
Report abuse

Book Fanatic
4.0 out of 5 stars Good Sequel!
Reviewed in the United States 🇺🇸 on March 18, 2021
Verified Purchase
This continues with the team going forward to their original starting point. They should have landed back into Lincoln's lab. Well... that was not to be. Instead, they landed smack dab in the middle a violent war between Neaderthals and humans. This story is set in that crazy Neanderthal society. Very interesting. Lots of action. I was enthralled and read it in two settings. I loved Lincoln and Skyra.
Read more
Helpful
Report abuse

BarbaraSS
5.0 out of 5 stars What now?
Reviewed in the United States 🇺🇸 on January 8, 2022
Verified Purchase
Still loving this storyline! Lincoln and Skyra are a good match and make for exciting reading. Now, they have jumped again and what will they find?
Read more
Helpful
Report abuse

Glen Ersly
5.0 out of 5 stars Another solid book from Stan.....
Reviewed in the United States 🇺🇸 on March 9, 2021
Verified Purchase
Just when you think you pretty much have Stan Smith’s books figured out, the story takes a turn that you absolutely would not expect. This is definitely the way the second book in the series reads, it takes you to another world in which you are amazed at the detail and fantasy that he writes. I read all three of these books in about three nights, they are just excellent.
Read more
Helpful
Report abuse

Montzalee Wittmann
3.0 out of 5 stars The present isn't what it used to be!
Reviewed in the United States 🇺🇸 on November 15, 2020
Verified Purchase
Foregone Conflict by Stan C Smith continues the story of the Neanderthal girl and the scientists time travelers. They jump back to their time line but life is not what it should be at all! Neanderthals and humans are at war with each other and some prehistoric creatures survived also. Neanderthals didn't die off. There is no advanced civilization. This is their story of trying to survive a brutish life style.
Read more
Helpful
Report abuse

SG
3.0 out of 5 stars Good premise, but tedious to follow.
Reviewed in the United States 🇺🇸 on April 28, 2021
Verified Purchase
I enjoyed the story, book one hooked me in. The problem came in book 2 when the language of the "native" tribes was used so extensively that it became simply a chore to continue reading after they arrived in the large city.
Read more
Helpful
Report abuse
See all reviews

Kindle Customer
5.0 out of 5 stars What if?
Reviewed in the United Kingdom 🇬🇧 on August 6, 2020
Verified Purchase
Another great installment from a spectacular series. A really interesting take on what modern life may be like if neanderthals and homo sapiens co existed. Lincoln, Skyra and the team are very relatable characters and keep you engaged from start to finish. Looking forward to the next chapter.
Read more
Report abuse

Walter Scott
5.0 out of 5 stars Life in the past is NOT simpler and more relaxing
Reviewed in Canada 🇨🇦 on February 18, 2021
Verified Purchase
A couple of dozen pages into Foregone Conflict, I was getting frustrated. Lincoln’s party started out in Obsolete Theorem by deliberately going back in time 47,000 years and spending most of the story trying to survive in a brutal world of Neanderthal versus Homo Sapiens conflict, conducted with clubs, stones, crude weapons, teeth and fingernails. But Stan C. Smith obviously had a plan, and he tells a very good story, so I pre-ordered Book #2 the same way I always pre-order the next Stan C. Smith book – because it is always worth it.
And this one has Skyra, the young Neanderthal woman whose existence apparently will have a critical impact on future events, plus the five human time-travelers, landing in a war zone with thousands of Neanderthals and Homo Sapiens at war, using clubs, stones, crude weapons…
But this is a Stan C. Smith novel, so sticking with the story always turns out well for the reader, and while Stan populates this Neanderthal-dominated locale with 40+ characters with pure awful names made up of random combinations of consonants and vowels (mainly the letters “a” and “u”) plus hyphens, you get a totally original storyline and unyielding suspense.
The book ends with the main characters moving ahead in time – about 55,000 years - and you will either be asking yourself, “Was that weird, or not?” and looking for something more conventional for your next read, or picking up a copy of Hostile Emergence and settling back into that same unsettling groove of finding out what happens next. That second one would be me.
Read more
Report abuse

Joan Ross
5.0 out of 5 stars Book 2
Reviewed in Canada 🇨🇦 on May 26, 2022
Verified Purchase
I am really enjoying this series. Fast paced, intriguing premise and a hugely captivating cast of characters. I am looking forward to the next book.
Read more
Report abuse
See all reviews
Report an issue
Does this item contain inappropriate content?
Report
Do you believe that this item violates a copyright?
Report
Does this item contain quality or formatting issues?
Report