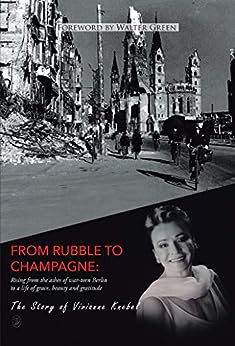 From Rubble To Champagne: Rising from the ashes of war-torn Berlin to a life of grace, beauty and gratitude Kindle Edition

john e hatch
5.0 out of 5 stars Inspiring and Insightful
Reviewed in the United States on April 11, 2020
Verified Purchase
The Story of Vivianne Knebel is a heartfelt and inspiring memoir that captures your interest from the first page to the last. She reveals the hardship, demoralization, insecurities, and yearnings caused by her illegitimate and impoverished childhood in worn torn Berlin; her challenges as a post-war immigrant; her struggles in school; and, her tribulations at work. She shows how her searching, strengths, and gratitude overcame her demons and allowed her deeply fulfilling marriage, family, and personal life. The insights shared in this autobiography enrich our soul.
Read more
Helpful
Report abuse

Amazon Customer
5.0 out of 5 stars Inspirational personal journey from tragedy to triumph
Reviewed in the United States on April 8, 2020
Verified Purchase
This is a MUST READ!!! The author takes you on a captivating trip back in time to war-torn Berlin as you experience her trials and tribulations as a young girl in post World War 2 Germany. Vivianne's remarkable story of a lonely childhood in war-ravaged Germany and struggles as an immigrant to Canada as a young woman is compelling. Her narrative continues in the U.S. where she finds love, peace, and happiness is told with grace and wit. In a sense, it is a story to which many Americans can relate and celebrates the spirit and strength of one person over insurmountable odds. You will be captivated, enthralled, and entertained! It's definitely a page-turner!
Read more
Helpful
Report abuse

dnb
5.0 out of 5 stars Inspiring
Reviewed in the United States on May 2, 2020
Verified Purchase
A poignant and inspiring biography by survivor of WWII ravaged Berlin. The tale of her migration from Europe to Canada and finally the United States includes poverty, family rifts, workplace harassment, and educational challenges, but ultimately her perseverance leads to romance, marriage, security, and happiness.
Read more
Helpful
Report abuse

Amazon Customer
5.0 out of 5 stars Engaging and Inspiring
Reviewed in the United States on April 21, 2020
Verified Purchase
Vivianne Knebel’s memoir moves the reader with a compelling story. It is uniquely her own, yet contains reflections and insights that can universally inspire and resonate.
The reader experiences the loneliness of the little girl, the insecurities of the young woman, and celebrates the joys of the transformational power and strength of self-knowledge, love and gratitude.
Read more
Helpful
Report abuse

Amazon Customer
5.0 out of 5 stars Vivianne, thanks for sharing your story
Reviewed in the United States on April 24, 2020
Verified Purchase
Sit down with Vivianne and let her tell you about a life filled with challenges and opportunities. Watch her grow both physically and emotionally from a young girl born in Germany during WWII to a mature woman, wife and mother. Very memorable.
Read more
Helpful
Report abuse

Dianne Woodman
4.0 out of 5 stars Uplifting Memoir
Reviewed in the United States on December 17, 2020
From Rubble to Champagne: Rising from the ashes of war-torn Berlin to a life of grace, beauty and gratitude is an uplifting memoir that tells the story of Vivianne Knebel, an illegitimate child born in Germany during the Nazi Regime. Each chapter focuses on specific years in Vivianne’s life from 1943 to the present day. During Vivianne’s childhood spent in Berlin, she talks about the way everyday life was affected by Hitler’s rule and her struggles in school. As a teenager, Vivianne moved with her family to Montreal, Canada, where she worked in a number of jobs in which she faced boredom, sexual harassment, and depression that nearly ruined her life. As a young adult, she married a German immigrant, who has had a profound effect on her life from the beginning of their relationship and throughout their marriage.

Vivianne faced many challenges throughout her life, and readers get a glimpse into her personal observations on how she survived the tough times by building resilience, which enabled her to evolve and grow as a human being. Black and white photographs are strategically placed in the story and give readers a personal connection to this wonderful and heartfelt autobiography. Vivianne’s journey from childhood through adulthood and the ways that she approached crises in her life will hit home with readers in a very personal way. From Rubble to Champagne is a worthwhile book to read that will touch readers’ hearts as they follow along on Vivianne’s journey as she began her life as a poverty-stricken German immigrant and through perseverance, a chance meeting with a stranger, family love, and friendship now lives a happy and fulfilled life as a United States citizen. At the end of the story are lined pages for readers to write down anything that might have resonated with them.
Read more
One person found this helpful
Helpful
Report abuse

Vicki May
5.0 out of 5 stars Inspirational Read
Reviewed in the United States on December 16, 2020
From Rubble to Champagne was a wonderfully written memoir which is touching and inspiring. Vivianne Knebel recounts her sometimes tumultuous life from her birth in Nazi Germany to finding happiness and love in Canada with such humor and candor that it is like a conversation with a friend. This book is a very emotional read but also so inspiring as she recounts all that she overcame in childhood, some dark days even as an adult and all that she has accomplished in her life despite a difficult beginning. I highly recommend From Rubble to Champagne:Rising from the ashes of war-torn Berlin to a life of grace, beauty and gratitude to everyone. Thank you Vivianne Knebel for sharing your wonderful story.
Read more
One person found this helpful
Helpful
Report abuse

Chewie_the_Mouse
4.0 out of 5 stars Heartfelt and inspriational
Reviewed in the United States on December 16, 2020
"From Rubble to Champagne" is an inspiring book written by the author as a tribute to her husband. It begins with her early life in war-torn Berlin, and covers her experiences through the present day. While I'm certain Mr. Knebel was thrilled with this moving gift, there is plenty to appreciate in this book for everyone.

I enjoyed the historical perspective of the different times (and places) in the past that Ms. Knebel experienced first-hand. However, the true inspiration came as the author discussed how she learned and grew from her experiences, and how she maintained a (mostly) positive attitude. There are also some valuable lessons about how to nurture an internal attitude of gratitude.

I appreciate the author sharing some of the most personal aspects of her life with us, her readers. Self-help books are great, but I personally gain more from an author who is willing to open up and share true-life experiences. Ms. Knebel's generosity in this regard will no doubt be meaningful for many future readers.
Read more
Helpful
Report abuse
See all reviews

Jorgensen
5.0 out of 5 stars Incredible Book
Reviewed in Canada on May 17, 2020
Verified Purchase
Wow, what a roller coaster ride!  My wife and I could not put this book down.  We agreed it was one of the most involving true accounts on the page that we’ve come across in a long time, and give it our highest ratings.  As we relived Vivianne’s life, we felt sorrow, surprise, love, happiness, sadness and excitement.  How she, one person, can survive and thrive in these circumstances and places is simply amazing.  This is a real revelation that leads to her ultimate good fortune and victory.
Read more
Report abuse
See all reviews
Back to top
Get to Know Us
Make Money with Us
Amazon Payment Products
Let Us Help You
EnglishChoose a language for shopping. United StatesChoose a country/region for shopping.
© 1996-2021, Amazon.com, Inc. or its affiliates