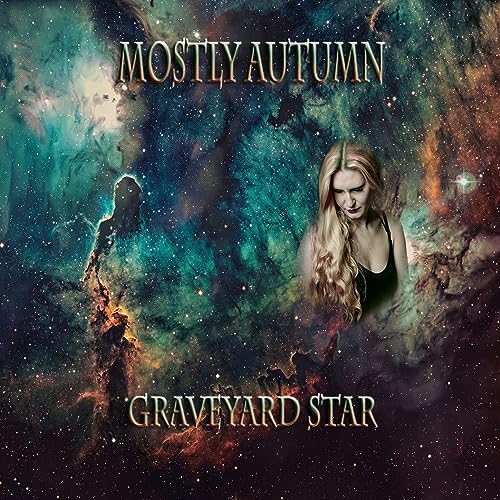 Mostly Autumn
September 24, 2021
4.7 out of 5 stars 43 ratings
See all 2 formats and editions Hide other formats and editions
Buy the CD album for $23.99 and get the MP3 version for FREE.&nbspCD album ships from and sold by Amazon.com. Terms and Conditions. Does not apply to gift orders. Complete your purchase of the CD album to save the MP3 version to your Music Library.

4.7 out of 5 stars
4.7 out of 5
43 global ratings
How are ratings calculated?
To calculate the overall star rating and percentage breakdown by star, we don’t use a simple average. Instead, our system considers things like how recent a review is and if the reviewer bought the item on Amazon. It also analyzes reviews to verify trustworthiness.
Top reviews

Timothy C.
5.0 out of 5 stars Beautifully stunning music from a sinfully underrated band.
Reviewed in the United States on November 18, 2021
Verified Purchase
If you take music seriously, if you are a fan of modern progressive rock, if you appreciate bands like Pink Floyd, Marillion, Yes, Within Temptation, then you owe it to yourself to ate least give this veteran band, Mostly Autumn, a serious listen. Founded in the late 90s, with roots from a Pink Floyd cover band, this community of musicians has produced an impressive body of work through changing and even rotating personnel and instrumentation. My highest recommendations.
Read more
Helpful
Report abuse

Lindsay Ward
5.0 out of 5 stars Album of the year
Reviewed in the United States on November 23, 2021
Verified Purchase
I don't write many reviews. In March 2015 I predicted Steven Wilson's Hand.Cannot.Erase. as album of the year so that will give you some guide as to whether you might like this. Not a duff track on the album. I could listen to this on various streaming sites ... don't do that for the lesser known bands. Support the artist, buy the CD, berate me if you don't love it.
Read more
Helpful
Report abuse

Kevin Kivlin
5.0 out of 5 stars Band just continues to get better and better !
Reviewed in the United States on November 18, 2021
Verified Purchase
Graveyard Star is one of those rare albums where every single song excels . I thought that Olivia's vocals on " Tomorrow Dies " a few years back were incredible , but she shines on every performance on this new album .
Though Mostly Autumn have been around for years , its great to see that Bryan and the gang are not content to rest on their laurels . Particularly enjoyed the inclusion of some violin and pipes , lending a bit of Irish flavor to some of the songs . Although this album has only recently been released , I'm looking forward to their next offering .
Read more
Helpful
Report abuse

Alveric
4.0 out of 5 stars Mostly Breathing??
Reviewed in the United States on October 4, 2021
This is an enjoyable album, although it is clearly a product of lockdown. For those with short memories Breathing Space was a band led by Iain, with Livvy on vocals, and latterly Brian on guitar. Inevitably they had a more keyboard driven, melodic sound than MA. This album more resembles a product of Breathing Space than Mostly Autumn.
Read more
One person found this helpful
Helpful
Report abuse
See all reviews

Clare Mann
5.0 out of 5 stars Fantastic
Reviewed in the United Kingdom on September 26, 2021
Verified Purchase
Mostly Autumn are one of the best progressive bands I have heard and I have seen live twice. Graveyard Star is magnificent, emotive,soul stirring music. This album will be on repeat for a long time to come,and the latest treasured addition to my music collection.
Read more
9 people found this helpful
Report abuse

rob slevin
1.0 out of 5 stars Total Eclipse Of The Soul...
Reviewed in the United Kingdom on January 5, 2022
Verified Purchase
Where to start ?.
I'm not a die hard supporter of MA, but I was heading in that direction before I bought this album.
I bought White Rainbow ,and it was my fave album of the year. I raved about it to everyone I know.
I then bought the Live- Double album,because I wanted to hear the previous female vocalist.
I raved some more.
I bought the 3 cd 'Best of',Box Set remastered by Bryan Josh.
I adored all 3 discs.
I pre-ordered this album ,and couldn't wait to hear it, especially after the disappointment of hearing the latest appalling YES album, The Quest. Just say NO, if you're considering buying it.
MA have often been called the 'poor man's Pink Floyd . On this evidence ,even the poverty stricken and homeless wouldn't accept this album as a gift.
It's like listening to Bonnie Tyler's Greatest Hits .('Hits is an anagram in this case). Mix in a grand dollop of Andrew Lloyd Webber 'hits', and the whole sorry concoction sums up this new MA release.
Slow pretentious meandering, followed by , followed by mid-tempo louder vocal melodramatics.
Josh's previously beautiful guitar work peeks out of the miasma upon occasion , but not nearly often enough to be anything more than background filler. Even Simon Cowell's minions feature a proficient guitar session man from time to time, Josh's contributions here are not too dissimilar.
If you like West End Tunes, buy this by all means.
If you expect 'rock/prog rock', even that of the beggars variety , then look elsewhere.
No more dross like this please Mr,Josh.
To paraphrase Roger Waters , it would be a miracle of the welcome kind , if the "Piano lid were to fall and break his ****** fingers".
Read more
2 people found this helpful
Report abuse

Mr. Stephen H. Lyall
5.0 out of 5 stars Possibly their best yet?
Reviewed in the United Kingdom on December 20, 2021
Verified Purchase
This album is near to perfection and saw the great majority of it performed to the usual high standard at their final gig of 2021 last night. The first half of their gig particularly was one of the finest performances I have enjoyed over my advancing years hence I felt I wanted to add my voice to those recommending this album.
Their back catalogue is also full of top quality material but I think the last three - this one plus White Rainbow and Sight of day just raise the bar to another level.
Can’t really add any in depth stuff as it has been ably covered by other reviewers but their music is really worth checking out (I only became aware of them through their Pass the clock album which is basically an overview of their earlier stuff) and their live shows are always thoroughly enjoyable. The band are tight musically and highly talented. Go see if you get the chance - usually in smaller venues which give a more inclusive feel.
Just disappointed I was slow off the mark so missed getting the limited edition double album.
Read more
One person found this helpful
Report abuse

Amazon Customer
5.0 out of 5 stars What's Not To Like!
Reviewed in the United Kingdom on October 17, 2021
Verified Purchase
I am amazed that Mostly Autumn are still not regarded as one of the UK's foremost prog bands. They have been making excellent albums since the 90's and never fail to impress. This latest offering is certainly up there with the best and deserves to be a best seller.
Read more
3 people found this helpful
Report abuse

A. Duggan
4.0 out of 5 stars Great songs delivered beautifully
Reviewed in the United Kingdom on November 9, 2021
Verified Purchase
Mostly Autumn will never be the band to break down Rock 'n' Roll doors, but what they do is give the listener well constructed melodic prog. This album satisfies the soul many times throughs it's twelve tracks
Read more
2 people found this helpful
Report abuse
See all reviews