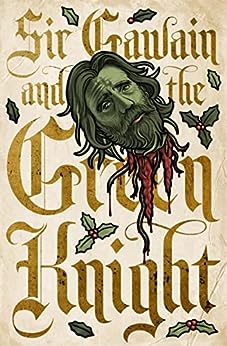 by Anonymous (Author) Format: Kindle Edition
See all formats and editions
Sorry, there was a problem loading this page. Try again.

The fourteenth-century epic poem telling the story of a brave knight from King Arthur’s Round Table and his deadly wager with a mysterious ghost.

A mysterious green knight riding a green horse storms into Camelot’s Yuletide feast, troubling the members of the Round Table, and challenges one of them to behead him on the condition that he may return the blow one year later. The brave Sir Gawain accepts but he is not counting on the green knight’s ability to cheat death. As Gawain journeys to keep his end of the bargain, his chivalry, loyalty, honor, and survival skills are placed to the test . . .

One of the best known Arthurian stories, Sir Gawain and the Green Knight is a fourteenth-century Middle English chivalric romance written by an anonymous author. It has been adapted numerous times for books, television, theatre, opera, and film, including the 2021 production, The Green Knight, starring Dev Patel.
Read more
Previous page
Next page

Billy
5.0 out of 5 stars Small Book with Beautiful Cover
Reviewed in the United States 🇺🇸 on October 19, 2022
Verified Purchase
So far seems to be a great translation of the story, with a really nice gold and green cover! Glad to have it in my collection.
Read more
One person found this helpful
Helpful
Report abuse

Isaiah M. Espinoza
3.0 out of 5 stars Translation
Reviewed in the United States 🇺🇸 on May 31, 2021
Verified Purchase
I heard about the movie coming out soon and I wanted to read the story for myself as I was unfamiliar with it. It’s easy enough to find and I chose to read this on instead of the one by J.R.R Tolkien. I found this difficult to read at times because of the older language. That says more about me than the text.
Read more
5 people found this helpful
Helpful
Report abuse

AnnieB
5.0 out of 5 stars Dover publications classic reprint
Reviewed in the United States 🇺🇸 on June 22, 2021
Sir Gawain and the Green Knight is a classic Arthurian tale, certainly one of the best known of all of them. This facsimile reprint and re-release by Dover of the 1909 edition is due out 22nd June 2021. It's 112 pages and will be available in hardcover and ebook formats.

This is a readable and accessible translation in prose for readers who are interested in reading it for the story rather than studying the actual middle English alliterative poems in translation (in which case I recommend the Tolkein translation as an accessible alternative). This is a faithful reproduction done to Dover's high standards and is enhanced by line drawn knotwork illustrations and chapter headers and footers. This edition includes the chapter notes and introduction by the translator, Jessie L. Weston. The original text has been reproduced with misspellings and inconsistencies intact for authenticity.

Five stars. Worthwhile. Five perennial stars for Dover, long may they reign. This review is for the reformatted and re-released edition by Dover, not for the story itself (which is also a ripping yarn and scary/creepy/wild in its own right).