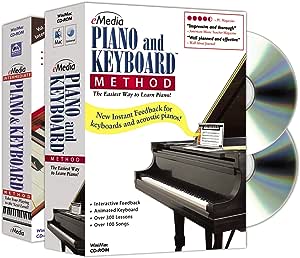 2 Volume value-priced set that includes eMedia Piano and Keyboard Method v3 and eMedia Intermediate Piano and Keyboard Method v2. eMedia Piano and Keyboard Method Deluxe includes everything you need to learn to play with over 450 audio- and video-enhanced lessons and more than 150 songs in a variety of musical styles. You'll be playing in no time by following the animated keyboard as it displays correct fingerings as the music plays or for any note or chord you choose. When used with a MIDI controller, eMedia Piano and Keyboard Method Deluxe provides specific feedback on playing mistakes, including wrong notes and rhythms. Other features include a metronome, recorder, variable-speed MIDI keyboard tracks, accompaniment tracks, and ear training exercises. eMedia Piano and Keyboard Method, included in eMedia Piano and Keyboard Method Deluxe, has received top ratings and honors from PC Magazine (4.5 out of 5), Music News, MacHome (4 Apples), Clavier Magazine and American Music Teacher Magazine which called it "an impressive and thorough piano teaching program." eMedia Intermediate Piano and Keyboard Method continues your musical journey with a focus on improvisation. ATTENTION MAC USERS - Beginning with macOS 10.15 (Catalina), Apple has eliminated the option to run 32-bit apps on the Mac. If you wish to continue using our applications, which currently require 32-bit support, do not upgrade your operating system past Mac OS 10.14 (Mojave). Alternatively, you can retain an older Mac operating system on a separate drive partition. eMedia developers are currently working on software updates to support Catalina and future versions of macOS, but this is a major undertaking. eMedia is currently unable to foresee how long it will take to create these new versions. If you purchased your eMedia software on or after September 7, 2019, upon receiving proof of purchase eMedia Music will provide you with a free upgrade to a macOS 10.15 (Catalina)-compatible version of an eMedia application when it becomes available. All other registered owners of eMedia software will be qualified for discounted upgrades.

2.6 out of 5 stars
2.6 out of 5
14 customer ratings
How does Amazon calculate star ratings?
Amazon calculates a product’s star ratings based on a machine learned model instead of a raw data average. The model takes into account factors including the age of a rating, whether the ratings are from verified purchasers, and factors that establish reviewer trustworthiness.
Top Reviews

James C. Reneau
1.0 out of 5 stars Update Tells real Story
Reviewed in the United States on January 6, 2018
Platform: PC/Mac DiscVerified Purchase
So far I have only used the Method CD and have not used the Intermediate CD as of yet.

If I were basing my review on the software itself I would rate it very high (This Changes In Update). The setup was a bit tedious since you have to download the program from the internet (CDs don't work with Windows 10) and then you have to make sure you have the latest player drivers, which is fine. The interface is very nice and I am using a MIDI keyboard. I really like the way it lays things out and in actually very well though out... Software and Interface and functionality would get 5 stars.

Now, that being said... The music in which they try to teach is absolutely HORRID... Songs from the 1500's to 1800's is just a plain awful to play... No one has ever heard of it, no one has ever played, no one wants to play it, and no one wants to hear it... To me, the software is there to teach piano and in order to do that you must be able to keep the person learning interested in learning. By having to practice disgustingly horrible songs that quite frankly have no rhythm, are extremely dated, have no timing, are out of tune, and the beat is almost non existent........ it really makes it frustrating and hard to keep interested in learning..Then they make you play the same songs over and over just using different keys and mixture of keys. I could give you a long list of the songs and you would be asking yourself... Why. As of now I am looking into something else...... Music: NO STARS.

UPDATE: 1/18/2018... So, I went out and got a Piano and a New Mic... I went through the steps of setting up this software with the acoustic piano and Mic. Even though eMedia touts this as being able to use it with an acoustic piano...it simply doesn't work with anything except a MIDI interface. I have made several email contacts and today I received this from their Tech Support.

So basically, this company is totally dishonest in their representation of their software.

Student of Wisdom
1.0 out of 5 stars I am having trouble with the QuickTime Player required for the Lessons.
Reviewed in the United States on January 20, 2020
Platform: PC/Mac DiscVerified Purchase
[Update: I did end up reluctantly returning the software. I was not too pleased about doing that. I really did not care about the quality of the song selections for the lessons, because that does not matter if the lessons do not fit my genre. It was about getting the lessons and from there reading and writing what I want. But, it was also a little disappointing that in 2020 anyone would have software that is not compatible with Windows 10 or simply Microsoft. Everyone is successfully configuring software to function in both Apple and Microsoft operating systems.]

I am having trouble with the QuickTime Player required for the lessons on Windows 10. I keep getting
QuickTime Install Error Alert
"The file
'ul_catalog.98CB24AD_52FB_DB5F_FF1F_C8B3B9A1E18E' cannot be installed because the file cannot be found in cabinet file 'QuickTime.cab'. This could indicate a network error, an error reading from the CD-ROM, or a problem with this package."
This is preventing me from being able to use these powerful lessons on learning to play piano. I am going to reflect for a couple of days on whether to return them or if there is some lawful solution that I am not aware of. Not really optimized for Windows 10 because of the exclusivity of QuickTime as the player. If a solution is found then I will change my rating once I see what I got. Right now I don't know because I can't open the lessons.
Read more
Helpful
Comment Report abuse

Croppled1Top Contributor: Mountain Biking
5.0 out of 5 stars Super Cheap way to learn the right way . Though the right way always has been a little dull ;-)
Reviewed in the United States on October 18, 2017
Platform: PC/Mac DiscVerified Purchase
A little dry to follow but really good lessons . I would run through some super easy to play stuff with paste notes on the keys for first timers it will be difficult but you can do it and learn . Think how much those lessons would cost at $20 a pop they go for now around here . I use the easy to play books as a reward playing the music I like after I do a lesson . The ones by Faber and Faber are cheap and very good easy to play versions of popular songs . They start off at a true beginner level .
Read more
4 people found this helpful
Helpful
Comment Report abuse

ashlad
5.0 out of 5 stars Excellent!!
Reviewed in the United States on April 5, 2015
Platform: PC/Mac DiscVerified Purchase
excellent!! I was planning on using this for my 9 year old daughter, but when I saw how thorough and well done it was, I decided to use it myself for a refresher course and to learn proper technique (I taught myself piano by ear).
Read more
5 people found this helpful
Helpful
Comment Report abuse

Robert
1.0 out of 5 stars One Star
Reviewed in the United States on March 25, 2018
Platform: PC/Mac DiscVerified Purchase
item does not work. don't buy it... I cant even return it
Read more
One person found this helpful
Helpful
Comment Report abuse