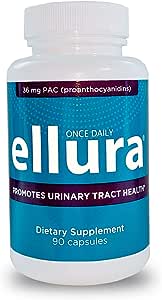 Save 10% when you receive 5 or more products in one auto-delivery to one address. Currently, you'll save 5% on your Oct 15 delivery.

Save 10% when you receive 5 or more products in one auto-delivery to one address. Currently, you'll save 5% on your Oct 15 delivery.

We'll send you a reminder before each delivery.
Save 5% now and up to 10% on repeat deliveries.
• No fees
• Cancel anytime
Learn more
Get it Tuesday, Jul 21
In Stock.
Qty:1
Deliver every:
3 months (Most common)
3 months (Most common)
Auto-deliveries sold by Trophikos, LLC. and Fulfilled by Amazon
Share
Have one to sell?
Sell on Amazon

Our mission is simple – provide the most effective urinary tract supplement to stop painful UTIs before they start!

If you're all too familiar with the pain of UTIs, sick of riding the antibiotic merry-go-round and frustrated with a medicine cabinet full of ineffective products, then it's time to learn more about the ellura difference.

"ellura is the real deal! I was getting UTIs every 3 weeks for years. I have tried every cranberry supplement out there and had zero success. My doctor then recommended ellura for me and my life has now been forever changed,” ellura customer, Texas

The POWERHOUSE of supplements for UTI prevention

Safe and easy to take

Consult physician before use if you have a red fruit allergy. ellura contains .025 mg of salicylic acid (an active metabolite of aspirin) per capsule. Those with allergy to aspirin should use caution if taking ellura.

Virtually none of the unnecessary

*These statements have not been evaluated by the Food and Drug Administration. This product is not intended to diagnose, treat, cure, or prevent any disease

As with all supplements and medications, discuss the use of ellura with your healthcare provider.

ellura is a non-antibiotic alternative in the management and prevention of UTIs. Once daily ellura helps you maintain a normal bacteria-free urinary tract and encourages healthy flushing of the urinary tract.

*These statements have not been evaluated by the Food and Drug Administration. This product is not intended to diagnose, treat, cure, or prevent any disease

4.6 out of 5 stars
4.6 out of 5
630 customer ratings
How does Amazon calculate star ratings?
Amazon calculates a product’s star ratings based on a machine learned model instead of a raw data average. The model takes into account factors including the age of a rating, whether the ratings are from verified purchasers, and factors that establish reviewer trustworthiness.

Claire
5.0 out of 5 stars Life changing **update a year later**
Reviewed in the United States on September 18, 2017
Verified Purchase
(Update: Almost one year later, I’m still doing great on Ellura. I only had one infection, I know what caused it, and it healed easily on a regular dose/length of an antibiotic. Huge difference from the previous year with a uti for 6 months straight!! I truly believe this supplement changed my life. Now, I take one a day and two if there was a trigger that day that could possibly cause a uti. If I feel a twinge of a possible infection, I take 2 ellura, d mannose, and drink lots of water, and it goes away. I haven’t had an infection for 8 months! If you read the rest of my review, you can see all the steps I did at first. I cut some of these out over the months as I’ve gotten better. Good luck. It’s a dreadful thing to deal with a uti.)

This supplement plus vitamin c changed my life! I had a uti in March that never went away. A few weeks after finishing a round of antibiotics, it'd flare back up again. I went through 6 rounds of antibiotics in 6 months. Many times, my symptoms would only go away a few days while on antibiotics, then I'd have lingering symptoms-- not terrible, but enough to drive me mad, plus the worry of too many antibiotics was always on my mind. My urogynecologist did a cystoscopy, several cultures, and diagnosed it as chronic uti. She recommended ellura and it helped tremendously. Once I also added 1000mg of vitamin c twice a day, I've had relief! I don't write many reviews, but I wanted to share my experience for anyone else who's in the same situation and looking for help.
Here's what I did:
Ellura 2 a day everyday. I take one in the morning and one at night. I will cut back to one a day once I feel confident the infection is totally gone.
Vitamin C 1,000mg 2x a day, but will cut to 500mg 2x a day soon too
D mannose before bed daily and throughout the day when symptoms appear. I tried this before ellura. It gave me a lot of symptom relief, but symptoms would come back if I stopped taking it. I still take it in addition to the ellura.
Probiotics, made for women. My doctor recommended 50billion cultures or more daily. I rotate through a few different ones for variety of probiotics.
Probiotics inserted vaginally, also recommended by my doctor. Sorry, that's tmi, but it'll help faster and better imo than just taking the probiotic by mouth, especially if you've been on antibiotics. Just open the capsule and use the powder, or just use the capsule if it's a gelatin capsule. An enteric coated capsule may not dissolve well. Do this for 2-3 days at bedtime, then 2-3 times a week.
This may be overload, but I also sanitized my washer, threw out all my underwear and bought new ones. I wash, sanitize, wash again and double rinse them separate from any other clothes.
That's it. Of course, follow all the hygiene advice you hear a million times, but you know isn't enough to fix the problem. Good luck!

Zeesal
5.0 out of 5 stars Almost too AMAZING, but it really does work!!
Reviewed in the United States on October 14, 2018
Verified Purchase
I am a nurse and in my 60’s. I read the reviews with much skepticism. I have suffered from frequent UTIs most of my adult life. And after almost two months I have to say Ellura really works!! I take one most days, but add a second one if I feel as though a UTI is coming on. It’s a little expensive, but I am so relieved not to have that uncomfortable feeling and need antibiotics - that I am happy to pay for something this easy. So far so good.
Update about 6 months later:
I still have not had any more UTIs. I take 1 Ellura capsule per day, plus I take another over the counter product with it - called UTI Care by a company called Natural Care. That product contains d-mannose as well as some other really excellent herbal remedies. I take two of those per day with the Ellura. Amazing results!! I have fought off that frequency and urgency feeling without needing antibiotics ever since starting this regiment. Highly recommend!
Read more
26 people found this helpful
Helpful
Comment Report abuse

Marie-Theresa Sieg
5.0 out of 5 stars For the longest time I have suffered from very bad UTIs.
Reviewed in the United States on June 29, 2016
Verified Purchase
**Update**
I just realized that is has been almost three years since I wrote below review. I still stand by everything I have written! I can't remember the last time I had any issues. In total I did three 3-month cycles/rounds of ellura. After that I stopped and I haven't had any issues since.
I have recommended ellura to many girlfriends, and bring it up every chance I get. Do yourself a favor and give it a shot! No more antibiotics, all natural. It's amazing!

ellura has saved my life.
For the longest time I have suffered from very bad UTIs. The kind were you instantly start peeing blood, if you pee at all.
I've tried it all before. Every little magic trick in the book, tales told by women on how they managed to get rid of UTIs. If I hadn't had UTIs about every week, some of these things might have actually worked. They didn't.
Meet my awesome new OB-GYN who also specializes in Urogynecology. AMAZING. She introduced me to ellura and told me right away that ellura does come at a price.
Heck, I'd pay twice as much for ellura if I had to!
Within one week of starting to take ellura ALL of my symptoms went away. It's been over 6 months now and I feel like a new woman. I take a pill a day and that's it. I don't ever feel like I have UTIs coming on anymore. And on the occasion that I do, I just take two pills and I forget about it and am fine 30 minutes later.

Page 1 of 1 Start overPage 1 of 1
This shopping feature will continue to load items when the Enter key is pressed. In order to navigate out of this carousel please use your heading shortcut key to navigate to the next or previous heading.
Back
Next
Pages with related products. See and discover other items: Best Rated in Cranberry Herbal Supplements, Best antibiotic pills for infections, Explore antibiotics for UTI infections